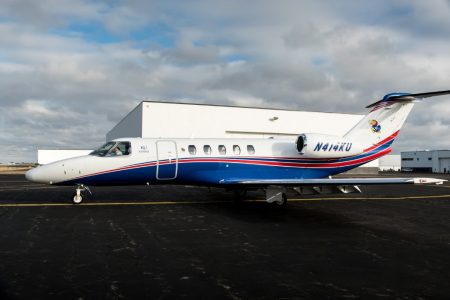 The University of Kansas’ top aviation official has left, yet that does not mean the university will stop using its private jet.

Jeff Long, chief pilot of KU’s aviation services department — who just so happens to share the same name as KU’s athletic director — has left the university to take a job at Hetrick Air Services. The Journal-World reported this on Tuesday, and KU spokeswoman Erinn Barcomb-Peterson confirmed his departure in an email on Wednesday.

“While we never want to lose talented employees, we were thrilled for Jeff to be recruited to such an exciting role, and we know he will do great work there,” Barcomb-Peterson wrote.

“As Chancellor (Douglas) Girod and (Interim) Provost (Carl) Lejuez have previously said — as has been reported in the LJW many times — we continue to explore alternate aviation models to meet the university’s needs,” she wrote. “That work is ongoing. Jeff’s departure doesn’t change that.”

KU has replaced Long with John Jeska, who Barcomb-Peterson said was a former KU pilot.

Aerospace engineering professor Ron Barrett-Gonzalez, a vocal opponent of the jet, said in an email that he is “heartened” at the news of Long’s departure. He said he believes the fact that a long-time pilot is departing “a very cushy job” might indicate the program’s days are numbered.

Barcomb-Peterson wrote that Long described his new role “as a tremendous opportunity for professional growth, as well as an opportunity for him to expand aviation services and economic development potential for the city of Lawrence, which is something he is passionate about.”

KU’s jet, purchased with money from a KU Endowment gift in 2014, is one of two aircraft the university uses for non-commercial travel, according to its aviation services page. The other is a small business jet of which KU has fractional ownership. Additionally, KU uses state-owned aircraft for business travel.

The jet, which has caused much dissension in recent years, is a Cessna CJ4 that seats up to 10 passengers and can fly at high speeds with a range of just more than 2,000 miles.

According to the aviation services page, the jet is used to “support activities such as health care outreach programs including clinics and continuing education, research and academic projects, public relations and fundraising, acquisition and administration of grants, and student recruitment.”

A 2018 report by the University Senate’s Planning and Resources Committee states that KU Athletics accounted for nearly half of the jet’s trips from January 2015 through February 2017. It also showed that most of the flights the aircraft made were for a distance of less than 300 miles.

In January of 2018, Barrett-Gonzalez said the university could get by using smaller, propeller-driven planes, calling the situation “akin to owning a Lamborghini and using it to haul hay half a block to feed your horses.”

The report also stated that the jet’s yearly operational cost is more than $1 million.

In a written response to the report, Girod and then-Provost Neeli Bendapudi defended the expense, stating, “Operational costs are more than offset by the benefits back to the university through funds received through philanthropic efforts and athletics as well as savings through opportunity and lost productivity cost avoidance.”

In the wake of the university’s $20 million budget cut, the jet has remained a topic of discussion at campus events such as Lejuez’s September community forum and even at the first provost presentation, during the question-and-answer session.