Fan seeks root of his obsession in ‘Jayhawker,’ a memoir exploring basketball and life 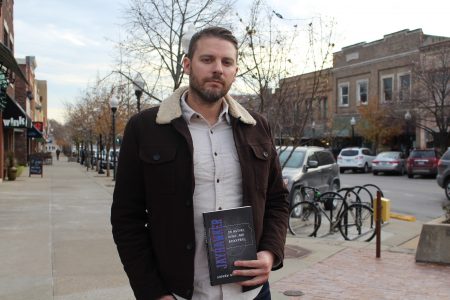 Andrew Milward, who lived in Lawrence from age 3 to 12, pictured on Nov. 13 on Massachusetts Street with his nonfiction work "Jayhawker: On History, Home, and Basketball."

Andrew Milward lived in Lawrence only from age 3 to 12, but he considers himself a Kansan through and through. That’s because he feels he came of age here.

“The Kansas state motto is Ad Astra Per Aspera — ‘To the stars through difficulty’– and in Kansas we did struggle,” the author writes in his recently released book.

Milward’s “Jayhawker: On History, Home, and Basketball,” is part memoir, part history, part reportage. But it’s entirely an ode to Kansas, the University of Kansas basketball team and the life lessons that basketball imparts.

Lawrence is where Milward shot hoops at the playground and collected empty plastic soda cups at the end of KU basketball games. It’s also where Milward first lived apart from his father and saw his mother struggle to get by. His parents divorced before the move.

“I’m a fiction writer. I didn’t necessarily set out to write a nonfiction book, but this one kind of made me write it,” he said in an interview with the Journal-World on Wednesday.

Milward’s inspiration for the book came after KU’s 2010 upset in the NCAA Tournament. In his first chapter, “Loss,” Milward describes his utter despair after the No. 1 seed — “my Jayhawks,” “my team and my burden” — lost to Northern Iowa. (Milward, by the way, is not a KU graduate. He played Division III basketball at Western Connecticut State University before transferring to the University of Arizona.)

“My rational mind knew that my hometown basketball team losing was not really a big deal, and yet there I was existentially paralytic,” he writes. “The impact of the Northern Iowa loss … (what) it did was make me more aware of my fandom, more inquisitive about its roots and origins, more willing to look at it with a colder eye.”

“Jayhawker” is about basketball — Milward takes readers through his own career and recent games in KU basketball history like the 2008 championship title game and the Jayhawks’ loss to Texas in 2011, ending their 69-game winning streak — but he also discusses history, race, class and love.

“One of our most important tasks, as I see it, is to remember, to seek correspondences wherever we can find them, even in basketball,” Milward writes.

The book, he said, is partly for his fellow obsessive fans. But Milward also hopes the book will be interesting to those who think they don’t like sports. For Milward, basketball is so much more.

“I wanted to try and talk about basketball like an art form, the same way I would painting or dance or visual art. Because to me, it is,” he said.

His favorite chapter is titled “Mama, You Been on My Mind,” a nod to the Bob Dylan song. It begins with Milward describing his favorite KU player, Darnell Jackson, whose senior night speech in 2008 so profoundly moved Milward that still he occasionally watches it. But as Milward alludes to later in the chapter, the reason he’s so moved is likely because of his own relationship with his mother, which was at times complicated.

There’s a vulnerability in Milward’s writing that he hasn’t experienced before in his fiction works, he said.

Milward touts his own basketball capabilities as a young man (he always calls himself out for the brag), but for every complimentary story, there are also stories of regret and mistakes: Milward learning about privilege, race relations and how to navigate his romantic relationships.

“I think the writing can feel a little bit more alive because there’s more at stake, because it’s me on the page,” he said.

“Jayhawker” has been published by the University Press of Kansas. Milward’s book launch will be hosted at The Raven Book Store at 7 p.m. Saturday.