In remembrance of fallen Jayhawks, 129 stars added under archway of Kansas Memorial Union 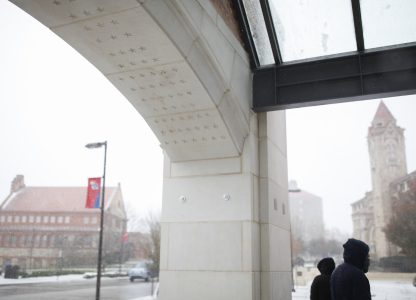 The Kansas Union’s reconstructed entry archway pays tribute to the 129 Jayhawks who died in the first World War with 129 stars etched into the interior span of the arch. The stars will be illuminated nightly.

Some people might not realize as they enter one of the University of Kansas’ busiest buildings — Kansas Memorial Union — that they are stepping into a World War I memorial.

But a reconstruction project that finished Sunday and added 129 stars under the union’s archway was an effort to increase awareness of the building’s status and remind people of the 129 fallen Jayhawks who served in the first World War.

David Mucci, director of the Memorial Union, said that Veterans Day, which was Monday, was the right time for a rededication ceremony.

“We have engraved in the arch canopy 129 stars representing each of the fallen,” he explained. “This Veterans Day seemed the appropriate time to do that, and we are happy to honor those who served and sacrificed so dramatically on behalf of the nation.”

The reconstruction project began out of a need to renovate the archway but, in Mucci’s mind, it doubled as the perfect opportunity to commemorate the fallen Jayhawks.

Architect Dan Sabatini said Mucci asked him if it would be possible to add 129 stars somewhere in the refurbished archway.

“I thought, ‘Where would it be appropriate but facing up toward the heavens, the stars?'” Sabatini said. “That’s where it started from. Figuring out how it was going to get laid out was a whole different deal; 129 doesn’t fashion equally.”

In addition to the stars, which will be illuminated nightly, there will also be a bronze plaque outside the main entrance to the union that states the date of the rededication ceremony and reads, “In honor of the 129 WWI Fallen Jayhawks.” The plaque was unveiled Monday at a ceremony inside the union, complete with the presentation and retiring of the colors by the KU Color Guard and speeches from Mucci, interim Provost Carl Lejuez and KU junior Scott Pao. 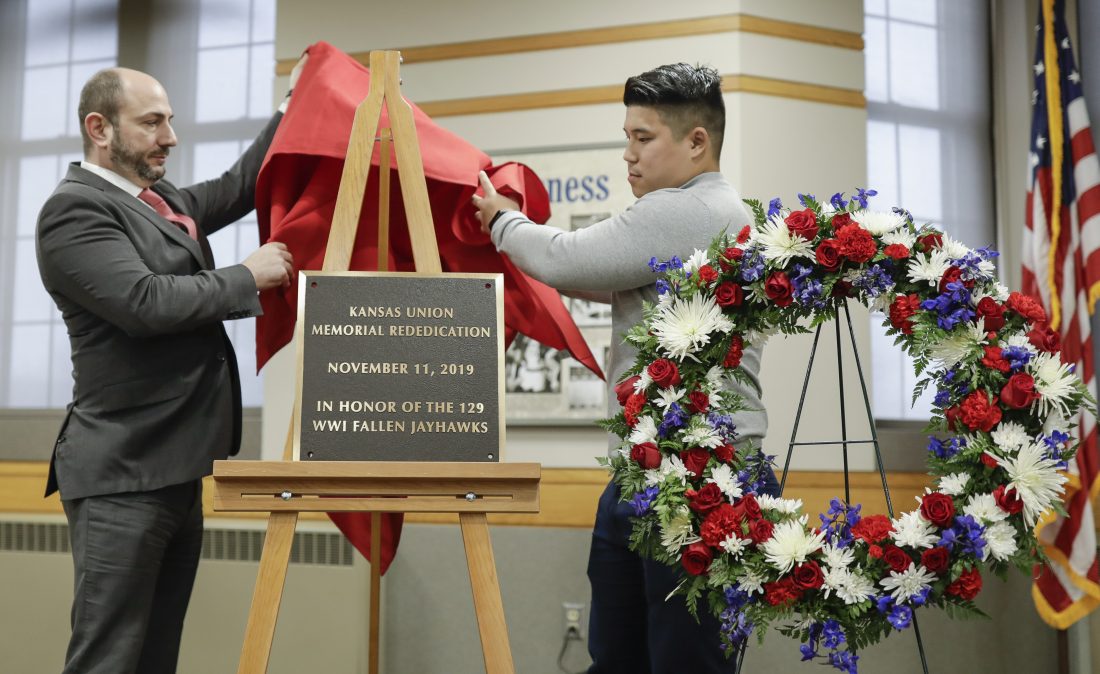 Pao, a 27-year-old who served in the Navy for four years before entering KU, is president of KU’s Student Veterans of America, a campus organization for veterans and other military-affiliated people.

He said it was “amazing” that KU hosted the rededication ceremony, specifically on Veterans Day, and said he appreciated all that KU did to commemorate veterans.

“Even on campus there are so many other war memorials,” he said. “It’s just crazy how so many spaces on campus are dedicated to veterans, to some kind of war. I feel like it’s very unusual for a campus to be like this.”

The rededication took place just one day after the reconstruction of the archway was completed.

“Yeah, it was that close,” Mucci said.

The archway looks the same as it did before the reconstruction, save for the addition of the stars. Sabatini called it a “very subtle” change. 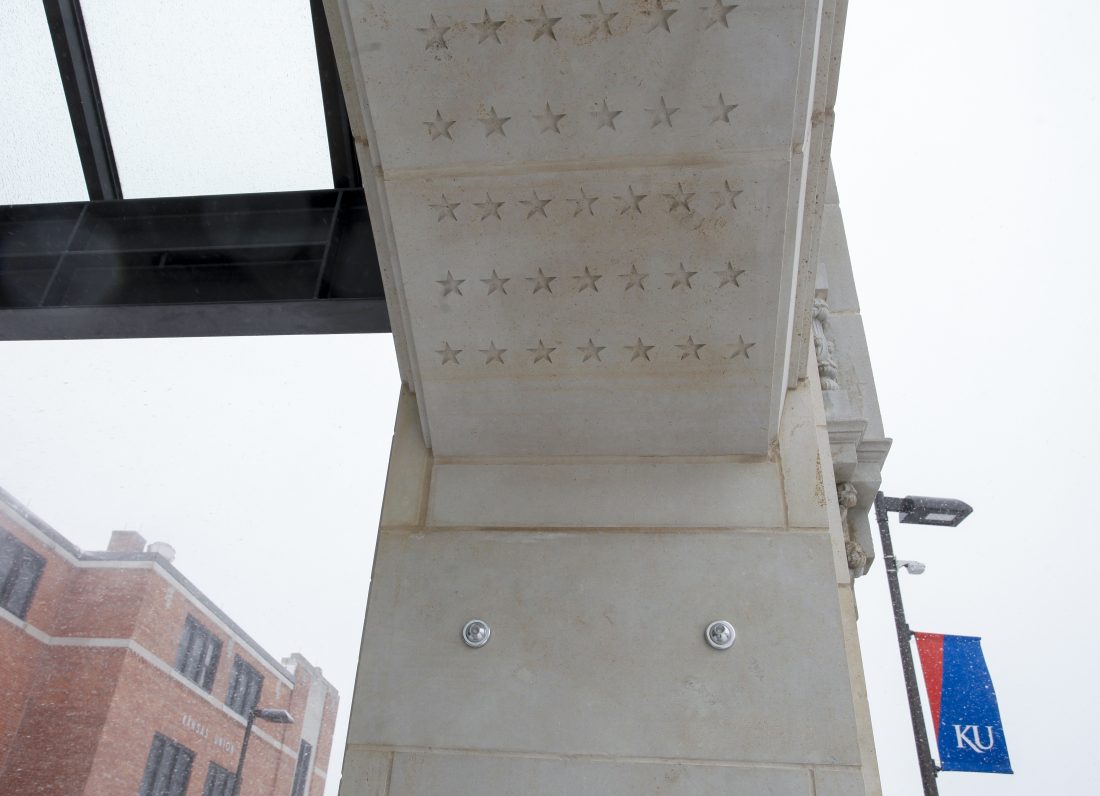 The Kansas Union’s reconstructed entry archway pays tribute to the 129 Jayhawks who died in the first World War with 129 stars etched into the interior span of the arch. The stars will be illuminated nightly.

The Kansas Memorial Union was originally dedicated as a war memorial in 1926, when the first cornerstone of the building was laid during a ceremony that about 3,000 people attended. Placed inside the union’s cornerstone was a copper box filled with mementos such as the front page of the Aug. 2, 1914, Kansas City Star article announcing the declaration of war, a photo of then-Kansas Gov. Ben Paulen and a 1925-1926 university catalogue.

After Monday’s ceremony, attendees were offered hot chocolate and cookies with frosting in the shape of red poppies — a symbol of World War I. The ceremony was originally planned to be an outdoor event, but snow and freezing temperatures caused organizers to move it inside.

“I told them it’s too cold to stay outside,” said Charlie Persinger, director of university ceremonies and special events.

Persinger, bundled in winter garments, wasn’t finished after the colors had been retired at the end of the ceremony. He was going to collect the four wreaths that KU used as decoration during the event:

“What I’m doing on behalf of the university is I’m taking the four wreaths now, and I’m going to put them on the four memorials on Memorial Drive.”