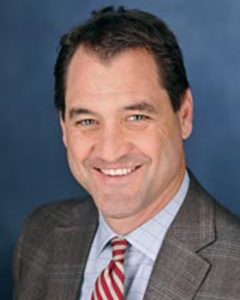 The vice chancellor of the University of Kansas Edwards Campus is the third of four candidates for the position of provost, KU announced Friday morning.

Dave Cook, who has served as vice chancellor since 2013, will give a public presentation Tuesday on the Lawrence campus.

Cook has also held administrative roles at the University of Kansas Medical Center. He received his master’s and doctoral degrees in organizational communication from KU. He attended Iowa State University for his undergraduate education.

On his curriculum vitae, Cook lists his major accomplishments in his role as vice chancellor of the Edwards Campus, including increasing enrollment by 36%, repaying an inherited $800,000 debt and launching 16 new academic degree programs.

The final candidate will be announced 48 hours in advance of the candidate’s campus visit, which is Thursday.

The first candidate to present was Margaret Raymond, the dean of the law school at the University of Wisconsin. The second was Carl Lejuez, KU’s interim provost.