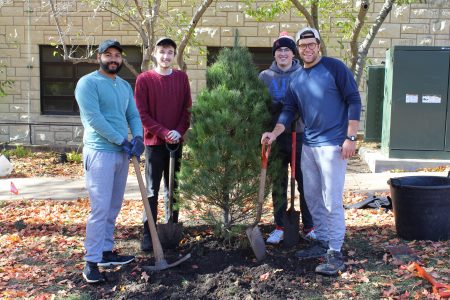 University of Kansas senior Joey Shondell spent Friday morning with some of his Alpha Tau Omega fraternity brothers, planting trees and shrubs near the west end of Jayhawk Boulevard.

“This area really hasn’t been landscaped since 1947, so it’s cool that we’re coming in here,” Shondell said. The best part of the morning, according to him, was the “satisfaction of actually putting the tree in the ground.”

“It’s always exciting: a lot of grubbing and digging and then you finally get to just plop it in the ground,” he said. “It’s cool that they’re going to be here when we come back in 20, 30 years.”

The fraternity brothers were among about 40 volunteers who helped with this year’s Replant Mount Oread event, an annual project started in 2012 to plant new life across campus. This year, the project took place in beds near Marvin Hall and Lindley Hall and along Jayhawk Boulevard.

Jeff Severin, director of campus planning and sustainability, said Replant Mount Oread has planted more than 200 trees across campus since 2012. Funds are raised for the project through KU Endowment. This year, $9,000 was raised. The Student Senate contributed an additional $15,000 through a Student Environmental Advisory Board allocation, which helped fund additional plants and benches outside of Lindley Hall.

Severin said many trees were lost on campus each year because of old age or disease but that Replant Mount Oread helped fill the gap.

“I think it’s great to see students out here with such a strong interest in giving back to KU in this way,” he said. “All these trees aren’t going to get very big while they’re students. But they can come back decades later and see something that they put in the ground.”

Nearby, a group of young women worked together to plant a white pine tree with the help of Shawn Harding, KU’s director of facilities. They didn’t know one another before the event, but one woman who graduated from KU in May and now works for the Center of STEM Learning said they “united to plant this tree.” 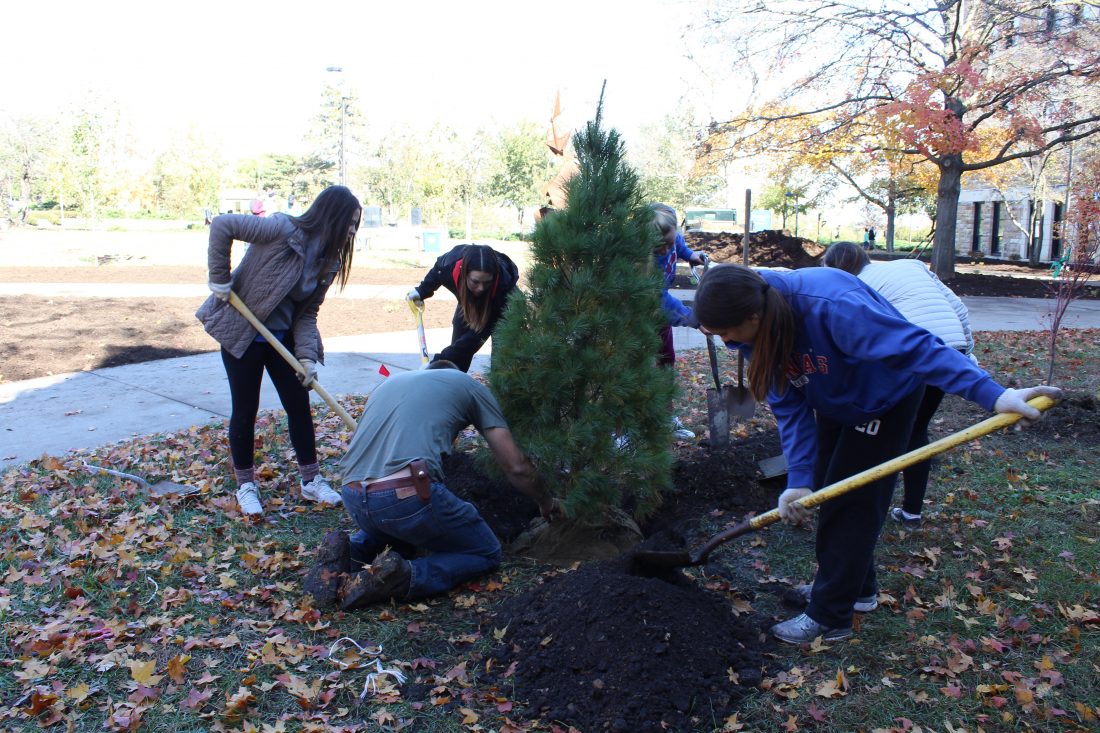 “I don’t know how many more trees I’ll plant in this life,” Amanda Summers added.

The group joked about how the tree “looks like Christmas,” and one woman suggested they should come back in December to decorate it.

Shondell, who serves on the campus tree advisory board, said the groups “all kind of teamed up and started planting trees on campus.”

As they finished mulching around their newly planted tree, the fraternity brothers all agreed on one part of their experience.

“It got us out of bed,” Shondell said.