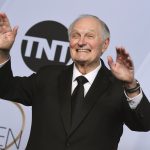 A well-known Hollywood actor is set to headline a series of lectures at the University of Kansas next school year.

KU’s Hall Center for the Humanities on Monday announced Alan Alda, who may be best known for portraying Hawkeye Pierce in the TV show “MASH,” as one of the five speakers lined up for its 2019-2020 lecture series, according to a KU news release.

Alda will appear in “An Evening With Alan Alda” on Nov. 25 at the Lied Center, 1600 Stewart Drive. The event will be free and open to the public, but audience members will need to obtain a ticket to attend.

Along with “MASH,” Alda has acted in many stage productions, TV shows and movies, winning several awards. Outside of the arts, he founded the Alan Alda Center for Communicating Science, which aims to help scientists communicate complex topics to the general public.

Marta Caminero-Santangelo, interim director for the Hall Center, said Alda was a good choice to headline the series because of his career in the arts and his support of the sciences.

“The Hall Center is particularly interested in building those bridges between the humanities, the arts and the sciences,” she said. “He’s the perfect speaker for us in that way.”

Sarah Bishop, associate director for the Hall Center, said the rest of the list of speakers for the series will offer a great look into how diverse identities are being represented in culture.

“We’re excited for the lineup and we love being able to bring this free, high-quality programming to the community,” Bishop said.

The series is also slated to include lectures from:

• Sarah Deer, a KU professor and author of “Sovereignty of the Soul: Centering the Voices of Native Women,” on Oct. 1 at The Commons in Spooner Hall, 1340 Jayhawk Blvd.

• Nadine Strossen, former president of the American Civil Liberties Union and author of “HATE: Why We Should Resist It with Free Speech, Not Censorship,” on Feb. 27, 2020, at the Lawrence Public Library, 707 Vermont St.