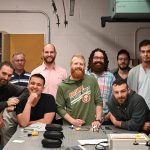 With the help of more than a million dollars in NASA funding, a University of Kansas research group hopes to take its studies to the deep reaches of space.

The group, which is led by KU physicist Christophe Royon, recently received a three-year, $1.4 million grant from NASA to help develop a telescope that could one day be rocketed into space on a satellite to orbit the sun.

Researchers plan for the telescope — called the Advanced Energetic Ion Electron Telescope, or AGILE — to orbit the sun in the heliosphere, Royon told the Journal-World. The heliosphere is a bubble-like region made up of the plasma emitted from the sun that extends far past the solar system.

The KU team, which includes graduate students and postdoctoral researchers, is collaborating with Shrikanth Kanekal at NASA’s Goddard Space Flight Center and Quintin Schiller with NASA’s Sciences and Exploration Directorate, according to a KU news release.

Royon said the idea behind the project is to build a detector to study the heliosphere to get a better understanding of the particles the sun creates. But Royon said there is a long way to go before the telescope leaves Earth’s atmosphere.

“To achieve this, we have to start from scratch basically,” Royon said.

Building the telescope is a hard problem to solve. It must be small enough to be launched into space but also be technologically strong enough to transmit the information it collects back to Earth from extremely long distances and survive absorbing the sun’s radiation itself, Royon said.

To build the telescope, Royon said the team needs to research — and run simulations of — many ways to capture data in space. After that, the group will build prototypes of the telescope and test it using beams of different particles.

“This project is really (to) show that our idea is working and it will lead to something that we can send into space,” Royon said. “Then — if it’s working fine, as we hope — then there will be a bigger project to get this kind of detector on a satellite.”

Once the group develops a prototype of the telescope, which is expected to take three years, it may be ready to be launched into space, Royon said.

If all goes to plan and the telescope does a good job collecting data while in space, the detector could be used for other applications. Royon said the KU Medical Center is interested in the project because the planned telescope detector could help doctors better understand how much radiation is being used during cancer treatment and where that radiation is going.

“It’s very important to know where the beam (of radiation) goes into the body,” he said. “If we have a very good resolution where we send the beam, we can reduce the dose and we can really focus on the cancer cells.”