KU interim provost lays out new budget model, says it will be implemented for 2020-2021 school year 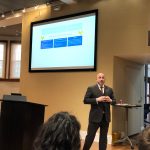 University of Kansas interim provost Carl Lejuez explains how a new budget model at the university will work during an town hall meeting on May 1, 2019. The university chose to create a new budget-making process after it announced plans for a $20 million budget cut in 2018.

University of Kansas interim provost Carl Lejuez gave the clearest picture yet of KU’s new budget model during a town hall meeting on campus Wednesday, and said that it would be ready to implement for the 2020-2021 school year.

“This is really fully formed for the first time,” Lejuez told an audience in Spooner Hall.

Lejuez said the new budget model will first be implemented to develop the budget for the 2020-2021 academic year, which is the university’s 2021 fiscal year. The university began restructuring its budget model after it announced in 2018 it would cut its Lawrence campus’ budget by $20 million.

Each year’s budget under the new model, like KU’s budgets under the current process, will go into effect in July. In order to hit that deadline, the university budget team will have to begin its work in late January or early February, Lejuez said.

First, the group will decide how much funding will go toward “foundational priorities,” including raises for faculty and staff, addressing deferred maintenance in university facilities, and covering “mandatory costs” such as increases in utility and insurance rates.

Also in the first step, the team will decide funding for strategic priorities, which may be one-time investments in certain projects on campus and subsidy funding to colleges and departments in which enrollment is low or the cost per student of teaching certain classes is high.

The model shows 51% of the funds that remain after the first step will be put toward academic units and 49% will go toward support units. Exactly how much funding each individual college or department receives will be determined by various metrics that the university tracks.

Of the funds sent to academic units, 65% of the money will be distributed among the units for educating students, 20% will be for research, 10% will be for student success programs and 5% will be for the units’ strategic priorities. Jill Hummels, a spokeswoman for the provost’s office, said the deans and associate deans would then decide how to further disperse the funds within the units.

One of the biggest changes is when the budget will be proposed. Unlike the current process, in which the budget is generally proposed in June, the new model will produce a budget proposal by March, Lejuez said.

Because that deadline is well before the end of the Kansas Legislature’s session, it will require the university to adjust on the fly to lawmakers’ actions. If the state makes an unexpected change to how much funding is allocated to higher education, Lejuez said, KU would have to rely on contingency funds to make up the difference.

“We don’t have a lot of savings, but we do have enough savings where we can say in any given year … when we give you a budget in March, we’ll stand behind it,” Lejuez said. “So if things change, we’ll use contingency funds to cover that for a year.”

Although most of the new budget model is “cooked,” some other parts of how the budget will operate have not yet been finalized, Lejuez said. Some last steps that need to be ironed out include creating ways to evaluate the metrics for the budgeting process and finding the best way to phase in the new model, he said.