Author to share memories of watching movies with President Reagan 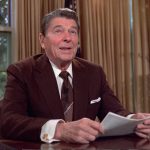 In this May 24, 1985, file photo, President Ronald Reagan works at his desk in the oval office of the White House. (AP Photo/Scott Stewart, File)

While Ronald and Nancy Reagan lost themselves in popular box-office hits of the time, from “Chariots of Fire ” to “Back to the Future,” Weinberg was observing them. He has turned that experience into a memoir, “Movie Nights with the Reagans.”

He’ll be sharing his intimate look at the Reagans during a presentation at 7 p.m. Thursday at the Dole Institute of Politics, 2350 Petefish Drive.

The presentation will have bipartisan appeal, said Bill Lacy, director of the institute.

“This would definitely be of interest to anyone. A lot of people disagreed with (Reagan’s) politics, but a lot of people respected him and liked the way he did things,” Lacy said. “This is a much bigger subject matter than the President and Mrs. Reagan.”

Lacy, who served as Reagan’s political director, was in the White House at the same time as Weinberg. While the two men knew each other, they didn’t work together.

“Mark was in the press shop and had an assignment to travel with the Reagans to Camp David, where they went on many weekends,” Lacy said.

Lacy worked in the political office and traveled with the President on occasion.

“Movie Nights with the Reagans” was published in February 2018 by Simon and Schuster.

The book tells the story of how they watched movies in times of triumph, such as when Reagan won by a landslide in 1984, and after times of tragedy, such as when President Reagan and Press Secretary Jim Brady were shot in 1981 and when the Space Shuttle Challenger blew up in 1986, according to the Simon and Schuster website.

Lacy said he was happy when he saw that Weinberg had published this book.

“I am very excited for him to share some good old stories,” Lacy said.

The event is free and open to the public. The book will be available for sale, and Weinberg will be autographing copies.