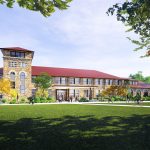 An architecture rendering shows a planned new facade for Stauffer-Flint Hall, located on Jayhawk Boulevard. A multimillion-dollar renovation of the building will move the entrance to the front of the building.

A plan for some maintenance fixes resulted in a project to renovate the entire home of the University of Kansas School of Journalism.

Stauffer-Flint Hall, located at 1435 Jayhawk Blvd., recently began a $3.75 million renovation, which will change the facade of the 120-year-old structure and bring the building’s main floor into the 21st century, said Ann Brill, dean of the KU journalism school.

Brill said the current project began because she wanted an elevator near the entrance of the building to be adapted. She said she’s been “complaining for years” about the elevator, which she said had become an accessibility issue for at least four students who use wheelchairs in the school.

“Being ADA-compliant was personally important to me,” she said, referring to the federal Americans with Disabilities Act. “I grew up with a sister in a wheelchair. When I see these things that are difficult for people who are other-abled to get around, we’ve got to fix that.”

The university agreed and decided to fund the fix. But once the school began working on the elevator, she said they also worried about the building’s electrical system, basement and other areas.

“About that time we were having conversations … we had to cancel classes because the pipes were clanking so loud,” she said. “So we said ‘Let’s fix this.'”

Once more ideas for changes started coming, the school’s alumni started donating, she said. The university is providing some funds for the deferred maintenance portion of the project, but some of the project is supported by donor funding. With the additional funding, the school was able to pursue a larger renovation project.

“It’s really humbling how everybody wants to make this better for our students,” she said. “They want to preserve what needs to be preserved in terms of what we teach and our values, but move it into another generation.” 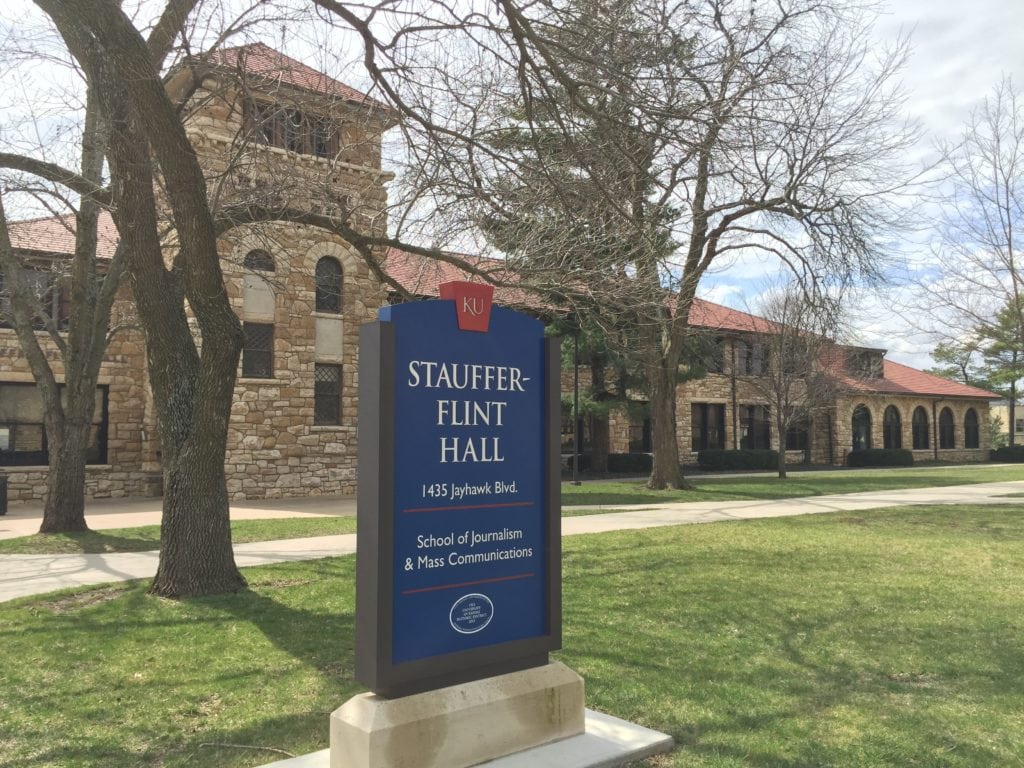 Stauffer-Flint was first opened in 1898 as a replacement building for the university’s engineering workshop, which burned down from a lightning strike, according to the university. The building was named Fowler Building after George Fowler, a Kansas City businessman who donated funds for the project.

Although the building itself does not have a historic designation, it is part of the University of Kansas Historic District, which includes the south side of Jayhawk Boulevard, according to the National Register of Historic Places. Brill said this made the building subject to some specific rules. Originally, the project called for a larger entrance overhang, but the historic district called for a more toned-down overhead to be consistent with the boulevard, she said.

Though the building’s entrance is only moving slightly, Brill said the current location has confused some people trying to get into the building. The new front entrance will be very clear and inviting to guests, and it will include a plaza area. Brill said the program is also considering a “digital chalking,” which would display messages on the sidewalks in front of the building.

“We hope it’s going to look stunning when you come down Jayhawk Boulevard,” she said. 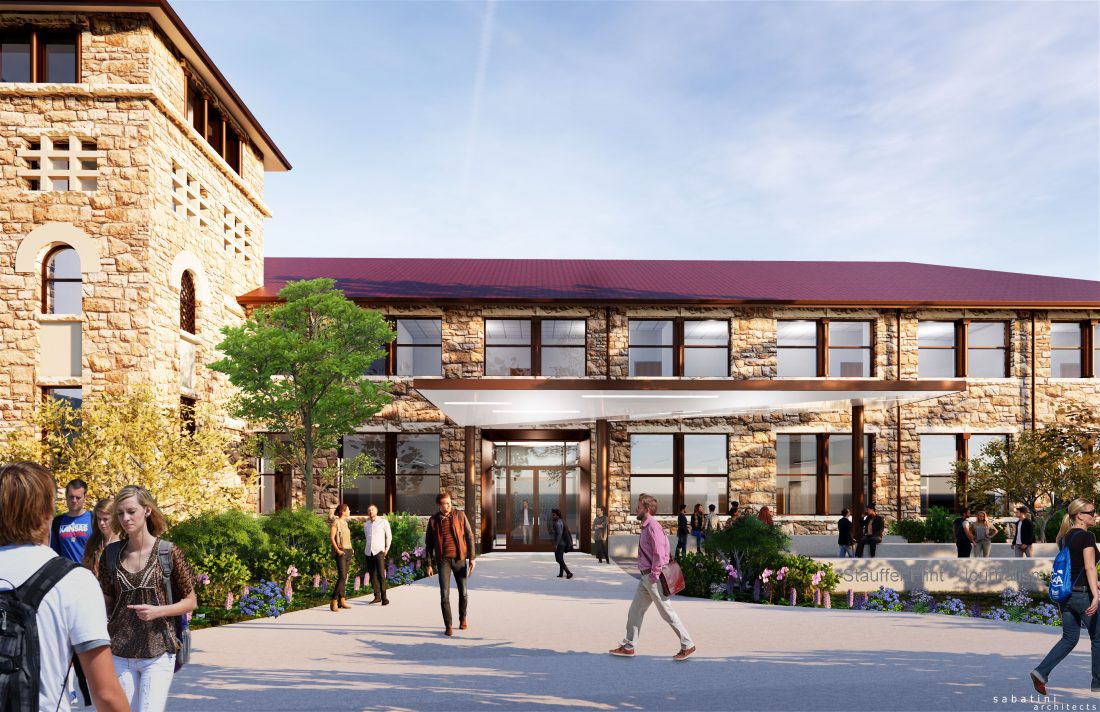 An architecture rendering gives a closer look at the planned renovated entrance for Stauffer-Flint Hall.

Inside the building, the most obvious change is gutting the eastern half of the first floor, which was made up mostly of classrooms. Those classrooms will be replaced with an open-air flexspace, which can be used as the building’s lobby and as study and work space for students. The western half of the first floor houses the school’s advising offices, Bremner Editing Center and the Richard C. Clarkson gallery, which is a flex space for public events.

“When you come into the front door, we wanted to reflect the kinds of things that are going on now,” she said. “The students kept telling us they want flex space and they want to be together but not in a really structured environment.”

Brill said the new design will also feature exposing the locally sourced stone used in the building’s foundational structure, highlighting the original construction 120 years ago. She said she believes the exposed stone in contrast to the renovated area is a nod to the school teaching old-school journalism methods in a rapidly evolving industry.

The first-floor area will also be the new home of the student-run newspaper, the University Daily Kansan, and studios for other media.

“So much of the media today is related to podcasts, audio and video,” she said. “We wanted to have a studio, and the whole idea is that you are part of the newsroom when you walk in.”

Although many classrooms will be removed for the project, Brill said there will still be standard classroom settings on the second floor. The project also calls for a renovation of the third floor of the building, which Brill said many people, including students in the program, were unaware existed.

The third floor will be changed to house more classrooms and additional student gathering flex space. Currently, it is used for faculty offices and it does not have much light. With the project calling for gutting the floor, Brill said the school plans to place some windows to provide more natural light.

The project is expected to continue until November and be fully operational for the Spring 2020 semester.

“We’re really excited about it,” Brill said. “I think it’s going to be really cool.”