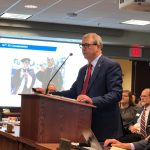 KU Chancellor Douglas Girod addresses the Kansas Board of Regents on Wednesday, June 19, 2019, in Topeka.

Tuition for in-state undergraduate students at Kansas universities will not increase next school year.

The Kansas Board of Regents gave final approval to tuition rate proposals for the 2019-2020 school year during its regular meeting on Wednesday, forcing all of the Regents universities to offer a flat rate for undergraduate students who are Kansas residents.

The move comes after Regents asked the state’s universities to consider changing their proposals in May, citing the Kansas Legislature’s increase of about $33 million in higher education funding.

In light of the request, the University of Kansas, Emporia State University and Wichita State University all reduced their in-state proposals for undergraduate students to flat rates, according to revised tuition rate requests that the Regents published Wednesday morning.

Kansas State University offered to reduce its proposed rate from a 3.1% increase to a 1.5% increase, but the Regents approved a motion forcing K-State to also offer a flat rate.

Regent Bill Feuerborn, who suggested forcing K-State to drop to a flat rate, said cutting the tuition rate for in-state students could help address the university’s recent enrollment struggles. K-State’s overall enrollment has fallen 2,545 students, or about 11%, since 2014.

“We’ve got to stop that train somehow and the Legislature helped us this year,” Feuerborn said. “To keep that on that track, my feeling is we need to (keep it flat).”

Agreeing with Feuerborn, Regent Shane Bangerter said he doesn’t think it would be fair for all of the universities to offer a flat rate except for one. Additionally, he said the Regents are hoping the Legislature will increase higher education funding by $50 million next year, and he didn’t think K-State’s rate increase was worth risking lawmakers’ wrath.

“It’s obvious you heard our comments from the last meeting,” Mullin said. “I know how difficult this is.”

KU Chancellor Douglas Girod told Regents the university reduced its in-state rates after the Regents expressed concern during the May meeting, but to do so it would need to cut planned funding levels for student services and deferred maintenance.

“To take it to zero, we’re cutting some stuff,” Girod said. “In working with them and trying to be a good team player, it’s not without cost.”

At KU’s other campuses, the proposed rates are a bit different. KU proposed lowering its tuition for in-state undergraduates by 2.6%, or $150, at its Edwards Campus in Overland Park, for a total cost of $5,654.25 per semester. Originally, KU had proposed a 1.7% decrease, or $100, for in-state students at the Edwards Campus.

However, the university kept its original proposal of a 1.3% increase, or $178.50, for out-of-state undergraduates at the Edwards Campus, for a total cost of $14,088 per semester. For its medical school, the university offered to keep all tuition rates flat.