KU cuts institutional funding support to athletics program by about $120,000 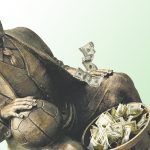 The University of Kansas cut the amount of funding the academic institution will send to its athletics program next school year. But former faculty leaders say the cut is still not enough.

Recently the Kansas Athletics Inc. board of directors approved a 2020 fiscal year budget, which begins in July and coincides with the 2019-2020 academic year. The new budget includes a lighter “direct institutional support” fund that comes from the university’s academic budget.

Joe Monaco, a spokesman for the university, confirmed to the Journal-World that the reduced funds to the athletics program were part of KU’s $20 million budget cut that was announced in May 2018 and on par with the overall 6% reduction to the university’s academic units and administration.

McClure said the cut was previously promised to him, but he noted that KU Chancellor Douglas Girod told him in February that the university would try to end the funding within 18 to 24 months.

“The cut in university subsidy to Kansas Athletics Inc. is roughly the scale promised for the coming fiscal year, leaving until next year the process of zeroing out the subsidy,” McClure said. “In light of the budget cuts imposed upon academic and service departments, this delay is unfortunate.”

Flores said, based on Girod’s comment, he expects the university to completely remove the funding by February 2021, which would be two years after he and McClure last met with Girod to discuss the issue.

“Anything greater than the 6% cut was always welcome from our point of view, but … we advocated zeroing out the university’s contribution entirely as quickly as possible,” Flores said. “Thereafter, we did believe that (Kansas Athletics) should find a way to contribute to the university rather than the other way around, as is currently the case.”

When asked if the reduction in the upcoming budget was part of a plan to eventually remove the funding altogether, Monaco said the university was considering the funding levels year by year.

“As (KU interim Provost Carl) Lejuez has said at his budget workshops and in discussions with governance, we will review this topic each year and continue to share any changes with governance,” Monaco said.

Although the athletic program will receive less university funding, the overall approved budget, a total of $106 million, spends about $7 million more than proposed the year before. However, the increase is close to the actual spending by the department during the 2019 fiscal year.

Kansas Athletics ended up spending $107 million, about $8 million more than its proposed 2019 budget, because of changes to the football program, including the “one-time transition” of firing former head coach David Beaty and hiring new coach Les Miles.

The athletic department did not have trouble covering the additional costs because of $8 million in increased contributions from boosters. Pat Kaufman, Kansas Athletics chief financial officer, said the increase was spurred on by the men’s basketball team qualifying for the Final Four in 2018 and the excitement of hiring Miles.