KU Theatre and Dance to explore diversity, other topical subjects in 2019-2020 season 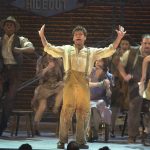 The cast from "Urinetown: the Musical" perform during the 56th annual Tony Awards June 2, 2002, at New York's Radio City Music Hall. The award-winning show is one of several productions KU Theatre and Dance will perform during its 2019-2020 season. (AP Photo/Suzanne Plunkett)

More plays and musicals with a focus on diversity and inclusion will take the stage for KU Theatre and Dance next school year.

The University Theatre and University Dance Company, the production arm for the KU Theatre and Dance department, announced in a Monday news release its 2019-2020 season of three dance productions and six musicals and plays, including William Shakespeare’s “As You Like it” and the Tony-award winning “Urinetown: The Musical,” among others.

Department chair Henry Bial told the Journal-World the department chose the slate of productions because of positive audience responses to similar themes in previous seasons. While the department does not have an intricate system to gauge community responses to its productions, Bial said he’s noticed selling more tickets and receiving longer applause for shows that deal with diversity issues.

“It’s important for us that our work be relevant to where our students are and where the community is,” he said. “The whole season is tied into issues of diversity, equity and inclusion, each in different ways.”

“It is important for us to select programming that clearly defines our values,” she said in the news release. “We are here to educate and train the artists and changemakers of tomorrow. Within that structure, we also believe strongly in offering experiences for our audience that reflect our commitment to diversity and inclusion.”

The diverse stories include “The Christians,” which explores faith and making space for people within religious communities; “In the Blood” in which a character deals with racism and sexism; and “Indecent,” a show that focuses on gender and Jewish identity and that Bial is directing himself. The dance side of the season will also focus on some of these themes, with the Fall Dance Concert exploring stories of powerful women.

While “Urinetown,” the final production of the season, features a tongue-in-cheek title and premise, Bial said the musical tackles important subjects such as social justice and inequality. The show tells the story of a government ban on private toilets due to a water shortage.

Bial said performing shows about topical subjects helps the department stay relevant and in touch with its audience.

However, exploring the serious topics does not mean all of the production will be “completely somber,” Bial said. Along with the diverse stories in the productions, Bial said audiences seem to be responding well to work that isn’t entirely tragic or comic.

“None of them are intended as civics lessons,” he said. “They are all compelling drama and they all have funny moments. Some of them are funnier than they are serious.”