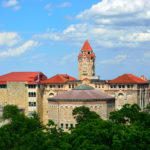 Fewer of Kansas’ high school graduates are attending the state’s public universities, and higher education leaders are concerned that the schools’ finances are suffering as a result.

About 55% of Kansas students who graduated high school in 2010 enrolled at a state higher education institution within a year, according to a May report by the Kansas Board of Regents. But for the class of 2017, the most recent year for which data was available in the Regents report, that figure had dropped to 50.3%.

While several factors are causing the drop, the Regents and state universities are looking into ways to either reverse the trend or find ways to cover up for the lost revenue those students used to generate.

“It’s certainly a concern,” said Dennis Mullin, chair of the Regents. “We better figure out ways to bring people into higher education.”

The data and causes 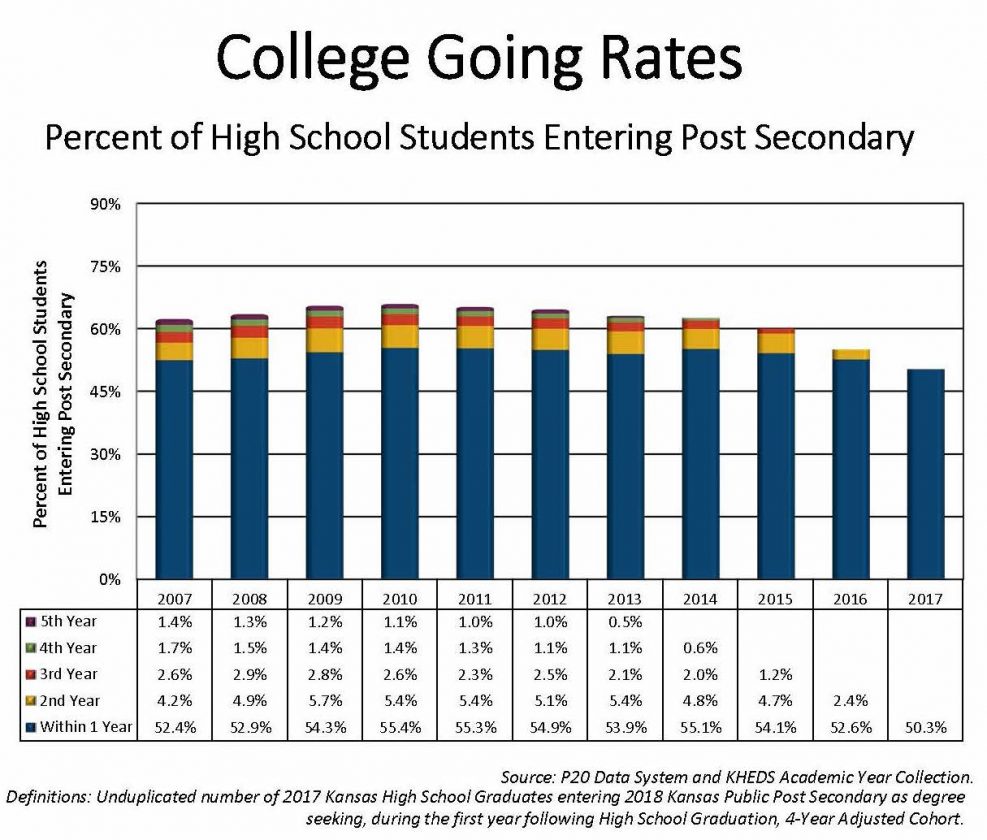 This graph from the Kansas Board of Regents May 2019 enrollment report shows a decline of Kansas high school students pursuing higher education opportunities within the state.

This graph from the Kansas Board of Regents shows the decline of Kansas high school graduates attending higher education opportunities within the state in recent years, even though more are graduating from high school.

The number of high school graduates in Kansas has been rising steadily over the past decade, but data still shows fewer and fewer of them staying in the state to pursue higher education.

Elaine Frisbie, vice president for finance and administration for the Regents, told the Journal-World that the Regents believe economic growth may be driving some of these enrollment changes. A stronger economy means more job availability for people with a high school diploma but no higher education, she said. The unemployment rate in Kansas sat at 7.5% in 2010, but had fallen to 3.8% and 4.2% in 2016 and 2017, respectively, according to the Regents data.

Mullin said some students probably look at the cost of attending college in Kansas, which has seen rapid increases in tuition rates as state funding dwindled over the last decade, and decide it’s better for their finances to enter the workforce immediately.

But Mullin said other things, including demographic changes within the state, are also driving the enrollment drop. Mullin pointed to southwestern Kansas, where the Hispanic population has grown rapidly in recent years, and said that several factors could make Hispanic high school graduates less likely to pursue higher education.

“It’s a three-pronged problem: number one, finance; number two, needing them to go to work to help the family after high school; and number three, the nature of Hispanic families is not to separate very easily,” he said. “They tend to stay together as a unit. You’ll see aunts, uncles and grandparents all in the same community. So it’s hard. We are seeing a drop in that area.”

Effect on KU and K-State

The decline in enrollment has been felt across the board, including at the state’s two largest universities.

According to the Regents data, the number of in-state students attending the University of Kansas within one year of high school graduation fell from 2,432 in 2012 to 2,245 in 2017, a drop of 187 students or nearly 8%. In the university’s own data, which shows all incoming students regardless of how soon after high school they enrolled, KU has seen a decline of about 91 in-state students within that time, a 3.5% drop.

This graph from the Kansas Board of Regents shows a decline of Kanas high school graduates attending the University of Kansas in recent years.

“KU took the strategic tack to make the university known nationally, recruit academically successful students and help them succeed to graduation once they are here,” university spokeswoman Erinn Barcomb-Peterson said.

The university that has been hit the hardest by the decline of in-state enrollees is Kansas State University, which has touted itself for years as the state university with the most Kansas high school graduates.

K-State has seen rapid declines in enrollment across the board. This past fall, the university reported a decline of a total of 601 students from the year before. Overall enrollment there has fallen 2,545 students, or about 11%, since 2014, which was the highest recorded enrollment total in K-State’s history, according to the university’s data.

“As the top college choice for Kansas high school seniors, it does affect Kansas State University when fewer in-state high school graduates are making the decision to go to college,” said K-State Provost Charles Taber in an emailed statement to the Journal-World. “This trend is happening nationwide. Student recruitment and enrollment is complex, and we are also taking actions to reverse the decline not only for in-state students, but also for out-of-state, transfer and international students.”

In the face of shrinking in-state enrollment, the Board of Regents has advised its institutions to consider recruiting more out-of-state students, much like KU has done. This suggestion came during a May meeting where most of the universities again proposed tuition rate increases for the 2019-2020 school year after the Kansas Legislature approved a budget that provided a roughly $33 million funding increase for higher education.

Regents members said that strategy could help state universities increase revenue, which would eventually allow them to decrease tuition. If the tuition rates begin to fall, the Regents said, more in-state students are likely to enroll.

“We have to reach out beyond our borders,” Mullin said. “We’re going to have to draw people into the state in hopes that they are going to stay … They are helping subsidize Kansas students.”

At K-State, the university began a strategic enrollment management initiative in 2017 that the university hopes will help it recruit more students to campus.

“This project focuses on key recruitment areas to boost enrollment and increase student success,” Taber said in his statement. “We expect to see the first impact to enrollment in fall 2020.”

Although KU has fared better than K-State, Barcomb-Peterson said the university is focusing on recruiting students it believes are much more likely to succeed and finish their college careers at KU. It’s also targeting students who could transfer into the university with some college credits already obtained, she said.

“We are working hard on multiple fronts to ensure Kansas students not only enroll at KU, but graduate from KU,” she said.