Tensions between U.S., Iran causing ‘a scary time’ for Iranian students at KU 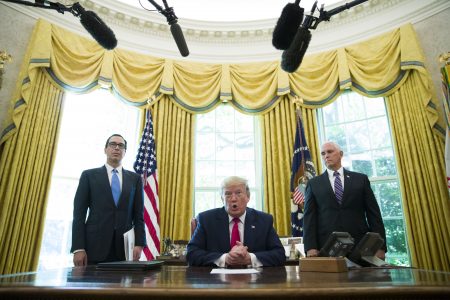 As the relationship between the United States and Iran becomes increasingly hostile, some students at the University of Kansas are living in uncertainty, an Iranian student told the Journal-World recently.

However, a KU political scientist thinks the tension will eventually subside without a physical conflict. But until then, these students may be in an uncomfortable situation.

During the 2018-19 school year, the university enrolled 46 students from Iran. One of those students, who has been attending KU since 2015, said she never would have come to the university if the current relationship between the two countries existed then.

“I wanted to go somewhere (besides Iran) else to study,” said the student, who asked to remain anonymous out of fear of the Iranian government retaliating against her if or when she returns to her home country. “But if the situation was like this, I would have gone to (Canada or Australia).”

Tensions between the two countries appeared to reach a breaking point last month when Iran shot down a U.S. surveillance drone over the Strait of Hormuz, which connects the Persian Gulf with the Gulf of Oman, south of Iran.

After the event, Majid Takht Ravanchi, Iran’s ambassador to the United Nations and a 1982 graduate of KU himself, told NPR that Iran shot down the drone to defend itself and the country would not be forced back into negotiations with the U.S. government over its former nuclear weapons deal.

“You cannot negotiate with somebody who has a knife in his hand putting the knife under your throat,” Ravanchi said, according to the NPR report. “That cannot be acceptable by anybody. Any reasonable person cannot accept to have negotiations with somebody who is threatening you.”

On Thursday, the U.S. conducted a similar action, shooting down an Iranian drone in the same area, according to the Washington Post.

Uncertainty while at KU

Dealing with hostility toward their home country is not new for Iranian students at KU. In 2017, Iran was one of the several foreign countries listed in President Donald Trump’s travel ban, which imposed restrictions on immigration to the U.S. from Muslim-majority countries.

The Iranian student said the university did its best to make the students feel welcome in Lawrence and on campus while American politics may have made them feel otherwise. When the Trump administration canceled the U.S. nuclear deal with Iran in May 2018 and tensions between the two countries began to rise, the university reached out to the Iranian students again, she said.

“They really supported us international students,” she said of KU. “When these sanctions are coming, you are feeling unwelcome, but you are getting the feedback from your adviser or KU faculty, and they say they are really happy to have you here.”

When tensions rose between the two countries recently, she said the university again reached out, attempting to offer more support, such as counseling. Although the students appreciated the university’s efforts, she said she knows only the U.S. and Iranian governments have any real power over the situation.

“We knew they could not do anything,” she said of KU. “They just tried to comfort us and they did their best, but it’s not enough… I don’t think the university can do more than this, unless the U.S. government wants to listen to (the universities).”

The nuclear deal between the two countries was meant to allow Western countries to begin investing in Iran to help boost its economy for the assurance that Iran would not continue with plans to develop a nuclear arsenal.

But when Trump took over the presidency in 2017, it was clear the new U.S. leadership was not fond of the deal just addressing the nuclear weapons, said Michael Wuthrich, a KU political scientist with a focus on the Middle East. Instead, the U.S. now wants to rein in Iran’s conduct throughout the region, such as stopping the country from supplying weapons to other countries that are opposed to the U.S.

“Their idea is if there was ever going to be a treaty, there should have been rules that tamp down this behavior,” Wuthrich said.

By canceling the deal and imposing new economic sanctions on Iran, the Trump administration was using a tactic of brinkmanship in the hopes it would lead to the negotiation of a new deal that includes more provisions in favor of U.S. interests.

This brinkmanship, or influencing political pressure to the point that an adversarial country would be forced to work more with the U.S., is a philosophy the Trump administration has been applying in other international relations, he said. Another example is the tariff battle between the U.S. and China, where the U.S. has imposed tariffs on Chinese goods in an attempt to hinder the Chinese economy until the country is forced to consider a new trade deal that better benefits the U.S.

Ironically, Wuthrich said, the brinkmanship has actually been more beneficial for a portion of the Iranian government that is adversarial to the U.S. But the Trump administration is hoping to apply enough pressure that it causes the country’s majority to favor working with the U.S. and make changes in the government.

Wuthrich said it was unlikely the current tension between the countries would lead to a physical war, but when a brinkmanship tactic is used, it is always a possibility.

However, Wuthrich said he thought Iran was actually willing to enter a new deal — just not with the Trump administration. He said Iran may hold on to the current state of affairs, if it can, until Trump leaves office — be that in 2021 or 2025 — and begin negotiating a new deal and pursue more open diplomacy with whoever succeeds him.

“They don’t want to give him the satisfaction of making a deal,” he said. “They don’t want conflict, but they are also not going to come to the table and give Trump the credit.”

Although war is unlikely, Wuthrich said he understood that didn’t make life for Iranian students in the U.S. any easier.

“I’m very sympathetic. … It’s certainly a scary time,” he said. “I know the news from the last month or so has not been fun (for them).”

The Iranian student said she worried about a war breaking out or possible mass deportation of Iranians. If a war does break out, she said some Iranian friends have said they would return home to help their families during the conflict.

But for her, she wouldn’t know what to do, because she couldn’t possibly pick a side.

“Honestly, I could not be against the U.S. or Iran,” she said. “I am studying here; I have a lot of American friends. I could not take action against them. And the other side is my family, my hometown, my country. Basically I could not do anything in that situation.”

Additionally, most visiting Iranians in Lawrence do not support the current Iranian leaders and would like the country to again consider working toward better relations with the West as it did when former President Barack Obama worked out the original nuclear deal, Wuthrich said.

“They have no problem with the U.S.; that’s a government issue,” she said of her friends and family in Iran. “If you ask Iranian people, not government people, 99% would say we don’t want war and we want to be friends of the U.S.”

Although the situation is tense, she said she planned to continue to live in the U.S. She recently received a green card, which allows her to be a permanent resident in the country, and she plans to stay to find a job when she finishes her degree next fall. Someday, she may even consider becoming a U.S. citizen, she said.

But her plans are not that exciting to her family back in Iran.

“My parents will be retired soon and they could visit, but because of the travel ban and the (current) situation, I don’t think they like that I will stay in the U.S.,” she said. “They would prefer I live somewhere else so they could visit me more.”