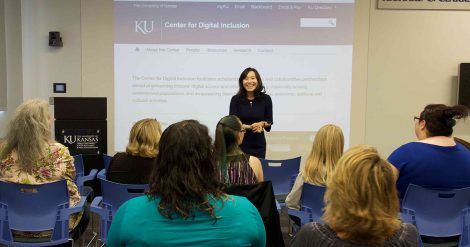 Hyunjin Seo, an associate professor in KU's School of Journalism, speaks to a group of women. Seo is the director of KU's Center for Digital Inclusion, which offers technology education to underserved populations in Kansas and Missouri.

A team of researchers led by Hyunjin Seo, an associate professor in the KU School of Journalism, recently received a three-year, $1.4 million grant from the National Science Foundation to create an evidence-based training program for former female inmates. The project expects to train about 300 women within the grant period, according to a KU news release.

The goal of the training is to help these women find jobs and to reduce the chances of their winding up back in prison, Seo recently told the Journal-World.

“Women have unique needs in terms of education,” she said. “The existing re-entry programs tend to be focused with the male population in mind. We tried to narrow the gap in terms of needs in what is currently available.”

The grant is in line with Seo’s work as the director of KU’s Center for Digital Inclusion, which offers technology education to underserved populations in Kansas and Missouri. She said this new training program was needed because the amount of women being incarcerated was increasing. According to the university, the population of female inmates in the U.S. has grown more than 800% in the last 40 years and continues to grow.

Additionally, many of the women who are leaving prison are mothers of children under the age of 18, Seo said. About 60% of the 1 million women currently in prisons or under other criminal justice supervision are mothers, according to the university.

“When they have proper knowledge and understanding of technology, we can potentially positively influence their children as well,” Seo said. “That’s why we think it is really important.”

The KU research team will also collaborate with Baek-Young Choi and Sejun Song, who are associate professors of computer science and electrical engineering at the University of Missouri in Kansas City.

Using previous research, Seo said the training would focus on teaching the women skills needed for jobs in science, technology, engineering and mathematics, also known as STEM. The training will be tailored to fit each woman’s specific needs and interests, she said.

The program will also focus on making sure the women feel they are receiving proper attention and guidance through one-on-one instruction time.

“It is important that we have a really systematic understanding of what they need to be able to find jobs and to adjust to their new lives effectively,” Seo said.

While the grant will fund the training, it also requires the team to research its effectiveness. The team will study the connection between increased knowledge and skills in technology education and how it relates to the women’s sense of preparedness for success in the field. The team will also track the women’s employment and recidivism rates after they finish the program.