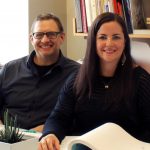 The City of Sydney, Australia, recently selected an alternative housing proposal from KU faculty members Joe Colistra, left, and Nilou Vakil as one of seven finalists for the city's "ideas challenge."

A Lawrence team’s “Smart Home” idea has captured the attention of officials in Sydney, Australia, and has earned a coveted finalist spot in Sydney’s Alternative Housing Ideas Challenge.

The team from the University of Kansas School of Architecture and Design came up with the “Smart Home” — a dwelling that captures biometric data about its occupants — to help make housing more affordable for residents of Sydney.

Joe Colistra, KU associate professor, and Nilou Vakil, director of the KU architecture school’s strategic initiatives program, proposed the “Smart Home” plan, which involves the use of sensors to record data about residents; that data is then used by a health care or other service connected to the housing complex. The city of Sydney selected the plan as one of seven finalists for the alternative housing challenge.

According to the competition’s website, 230 teams submitted ideas, and Colistra and Vakil were the only team outside of Australia selected as finalists. Vakil called the selection empowering because of the potential to realize cities of the future.

“It’s exciting and a big deal,” she said.

Along with their KU positions, Colistra and Vakil are a married couple who also operate the architecture firm In SITU Design. Vakil told the Journal-World an objective of the firm was to focus on public participation to help create sustainable community-based structures.

Vakil said the end result was the “complete opposite of gentrification,” the sometimes controversial practice of renovating an area that can result in property values being raised so high as to force out current residents who can no longer afford to live there.

“It allows people to stay or come back (and) invent the future of their own neighborhood,” she said of the firm’s principles.

The couple’s concept is a multistory apartment facility that includes monitors and recording devices to collect biometric data. This data would be used by a partner, such as a health care or early childhood development organization, to provide an array of amenities to the occupants.

“The actual housing unit design stems from the mockup units we’ve been doing here at KU that deal with data collection. The idea is that the housing unit collects biometric data. We’ve listed sleep sensors, gait analysis, hydration readers, health markers — those types of data-collection systems — and that data gets tethered to a ground-floor clinic.”

While Colistra and Vakil are aware of the privacy concerns related to collecting personal data, they said the “Smart Home” would collect data only for the community partner, which the team calls a Living Lab. The lab would then use the data to provide health services to the residents in the home. An example of a service the team mentioned in its proposal is monitoring the health of aging residents with floor sensors to detect falls and to alert health services.

While some may be wary of a home recording data, Vakil said it would be similar to the research projects that universities have conducted for decades rather than collecting data for a private business that would sell it for commercial purposes.

Using the Living Lab is key to the affordable housing portion of the home, Colistra said.

“The ground floor can be rented at exponentially more than the market rate, to a research institution that needs the data to help the residents,” Colistra said. “So that’s how it pays for itself. By placing these multi-use, multifamily complexes in university and hospital districts, it actually subsidizes the cost of affordable housing above it.”

Although their idea is one of the final seven, the city will not declare any as a “winner,” Vakil said. Instead, the city will explore all of the options and may create hybrid concepts from the seven ideas.

Some of the other proposals include pop-up shelters, which would retrofit currently unused buildings in Sydney to offer short-term transitional housing; and Pixel Pilot, which offers small living quarters of a bathroom and bedroom along with communal spaces, among others.

The KU team, which will also include KU assistant professors Gregory Crichlow and Casey Franklin, will work over the next several months in workshops and will eventually present a proposal and receive public feedback. The city of Sydney will then consider the proposals as part of its process of creating its 2050 master plan.

While no plans currently exist to build a “Smart Home,” Colistra said it could happen some day.

“They’ve asked some pretty detailed questions,” he said of the Sydney competition. “I think there is an expectation from the public that some real implementation needs to come out of this.”