KU study: Americans overestimate number of gun owners, which could have political ramifications 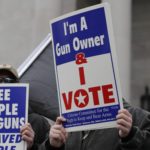 When it comes to guns, Americans tend to overestimate just how many people actually own them, which could be influencing the politics of one of the most polarizing issues in the country, according to a study from two University of Kansas political scientists.

In the study, which was published in the Politics & Policy journal, co-authors Don Haider-Markel and Mark Joslyn examined results from a 2016 nationally representative survey of 1,290 American adults who answered questions on a variety of policy and political questions.

Joslyn said that is a significant overestimation.

“We hypothesize that’s a result of gun owners simply interact with more gun owners in their life,” Joslyn said. “They always see people with guns, so it’s natural to take that sample and impose it on the rest of the United States and think there is more guns than there actually is.”

If most Americans knew the reality of the size of the gun-owning population, they may then see that population as politically weaker, Haider-Markel said.

Overestimating the size of populations is somewhat of a phenomenon, Haider-Markel said. He and Joslyn previously found that people tend to overestimate the size of the gay population in America, too.

“You still see some of the same phenomenon, where members of the group, or like-minded people, estimate that group’s size to be higher and there are subsequent implications for their policy attitudes based on how large they perceive that group to be,” Haider-Markel said.

The overestimation may also be clouding people’s expectations for the future. Joslyn said the survey found people expect the number of individual gun owners to increase in the future, but history shows it’s been declining, he said.

This may be created through confusion of reporting on the sales of guns. While reports can show sales may be going up, it doesn’t mean more individuals are buying them, but, instead, gun owners are buying more guns.

“I think that’s what’s going on; gun ownership is declining, but sales are not,” he said.

Correction: A previous version of this article misstated the name of one of the study’s co-authors, Don Haider-Markel.