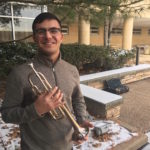 Baset Azizi, a University of Kansas sophomore majoring in trumpet, grew up in war-torn Afghanistan, where Western music was prohibited by the Taliban. When his trumpet teacher left Kabul, Azizi reached out on Facebook to David Bilger, principal trumpeter with the Philadelphia Orchestra, and a friendship was forged.

Baset Azizi looks like any KU music student, calmly pulling his silver horn out of its case, but he comes from a place where it wasn’t safe to have a trumpet in public.

Growing up in Afghanistan, where the Taliban forbid many things, including Western music, there were days when just walking to school could be life-threatening. It wasn’t uncommon for Azizi to hear explosions while in class in Kabul. He would cower with his classmates under desks crying, he told the Journal-World recently.

“When you left the building, it wasn’t a pleasant experience,” he said. Sometimes he would catch glimpses of body parts.

His parents sent him to what they thought was a safer school, the Afghanistan National Institute of Music, which had several American teachers. Even so, in 2014 a suicide bomber targeted a concert. Though Azizi wasn’t at the concert, the school’s music director was a target because he encouraged Western music, Azizi said.

When he first arrived at that school, Azizi, 19, wanted to play the piano. But the school’s trumpet teacher, from Washington, D.C., wanted him to play the trumpet.

“I had never seen a trumpet before. I wasn’t happy, but I didn’t want to be disrespectful to the teacher,” he said.

The moment he heard the teacher play the horn, everything changed.

While he was falling in love with the instrument, his teacher left Kabul for safety reasons.

That was in 2015. Azizi then had no one to learn from. Determined to keep playing, he practiced by listening to videos he found on the internet and connecting with other trumpet players on Facebook.

He found David Bilger, the principal trumpet player for the Philadelphia Orchestra, while listening to YouTube videos.

“When I heard him, it was the sound I was looking for,” Azizi said. He sent Bilger a Facebook message, asking if he would teach him over Skype. Bilger agreed. The only problem was the time difference. Azizi would be at school at 6:30 a.m. for his hourlong weekly lesson, but it would be 11:30 p.m. in Philadelphia.

“He was OK with doing it,” Azizi said.

A friendship formed. Azizi says he learned more than music from Bilger.

“I learned about him as a human being,” Azizi said. “Our relationship was closer than student and teacher. I would talk about my own problems and he would give me good suggestions. When you like someone and you see they are a really good person you try to be like them.”

As the relationship grew, so did Azizi’s talent. He applied to study his senior year at Interlochen Arts Academy in Michigan, an international center for the arts. Bilger helped him raise the money to attend the school. He was playing at the U.S. Embassy in Kabul the day his visa came through in 2016.

Once he graduated from Interlochen, a teacher recommended that he attend the University of Kansas. He was told it would be a quiet place to focus on his music.

“I am a hard-working student,” Azizi said. “I’m not sure it’s talent, but I practice hard. Some people like to play soccer; I like to play the trumpet.”

The most difficult part for Azizi was leaving his parents and three sisters behind. He has not been back to Kabul in three years.

“If I don’t call every week, they are not happy,” he said.

He just returned from winter break in Philadelphia, where he practiced with Bilger and heard the Philadelphia Orchestra perform. Bilger has become like a surrogate father. Their story was told on “CBS Sunday Morning” on Oct. 9, 2016.

Here in Kansas, the easy-going Azizi has built other relationships. He has become part of the family of Steve and Janice Sizemore. While they are volunteers with International Friends at KU, they actually met through a mutual friend on Facebook.

“He’s a learner,” Steve Sizemore said. “The trumpet was his ticket to the West, and he works very hard with his music.”

“I think growing up there (Afghanistan), his father did a good job of preparing him. He has been around good people and mentors,” Sizemore said.

Meanwhile, Azizi continues to practice several hours every day, as he works toward his music degree. While Lawrence feels like home, he misses his family.

“My first dream is to see my family,” Azizi said. ” I can’t go there, unfortunately. They still don’t feel safe; that’s why I am trying to raise funds to help them move to another country.”

Azizi has set up a GoFundMe page, “Help Afghan Trumpeter Save His Family from War.” He wants to raise enough money to get the family out of Afghanistan to a nearby country where they will be safe.

Sizemore believes Azizi will do well with his music — or anything he does — because he knows how to apply himself.

“People give him opportunities and he seizes them,” Sizemore said. “His hunger brings out the best in people, and teachers give him their best.”