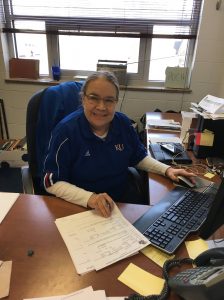 photo by: Contributed by Elizabeth Phillips

Elizabeth Phillips, assistant director of KU's Department of Public Safety, pictured at her desk in March of 2018.

Kansas Gov. Laura Kelly has appointed six members to the 911 Coordinating Council, including the University of Kansas’ assistant director of public safety, Elizabeth Phillips, in an attempt to include more nontraditional agencies.

The 911 Coordinating Council monitors the delivery of 911 services and develops strategies to improve the system. This past legislative session, the Kansas 911 Act was amended to include the addition of two new members representing nontraditional law enforcement agencies.

Phillips said her appointment, as well as that of Terry Clark, chief of police for the Potawatomi Tribal Police, was a big step in this representation. Nontraditional agencies are those operated by entities other than city or county governments. Examples include police departments of universities, railroads, airports, hospitals and Native American tribes.

Kelly noted that improvements to 911 services should serve all Kansans and said that Phillips would be an instrumental voice on universities.

“Elizabeth is a uniquely qualified professional who has long advocated for increased involvement of nontraditional law enforcement agencies in 911 coordination,” Kelly said. “Elizabeth will bring critical insight on ways to improve emergency call coordination among law enforcement and other public entities such as universities.”

Phillips has been involved with the 911 Coordinating Council for years.

“I’ve been able to listen to their calls, go to their meetings. They’ve always been open and welcoming,” Phillips said. But one day, she asked of nontraditional agencies: “Hey, is there any reason why we can’t have a seat at the table?”

Now that Phillips has that seat, she’s looking forward to helping nontraditional agencies, primarily universities and colleges, stay up to date on new training and technology. She will also bring university-specific issues regarding 911 services to the council.

The council meets six or seven times per year, with some additional ad hoc meetings. It has 28 members, 17 voting and 11 nonvoting. While Phillips is a nonvoting member, Kelly’s press secretary, Lauren Fitzgerald, said nonvoting members certainly had a voice and that “their input can effect change in Council direction.”

Phillips, 63, has worked at KU’s Department of Public Safety for over 40 years. She started as a student dispatcher, receiving emergency calls. (Today, for liability reasons, students do not serve as dispatchers.) Now, Phillips runs the civilian services branch.

KU Police Chief and Director of Public Safety Chris Keary said Phillips “certainly has been around to see the growth and change in 911 over the years.” He is happy KU is involved with the council. On campus, if a person dials 911, it goes to KU’s 911 dispatch center, not to that of Douglas County.