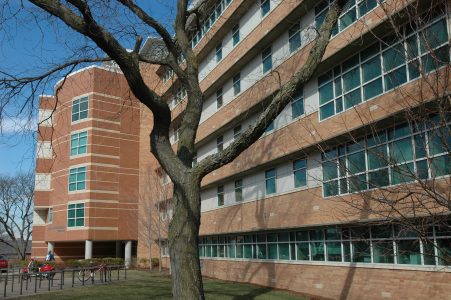 Joseph R. Pearson Hall, home of KU's School of Education, near 11th Street and West Campus Road, is pictured in this file photo from 2008.

University of Kansas researchers want to develop new ways for children with learning disabilities to visualize and achieve their goals — and they now have several million dollars in grant funding to help them out.

The $3.2 million grant from the U.S. Department of Education will allow the KU team to create a new education program that prepares students with learning disabilities to transition from high school to college or the workforce, said Michael Hock, the director of KU’s Center for Research on Learning.

Hock said the new program would focus on interviewing students about their goals and then demonstrating how education could help them reach those goals.

“As educators, if we have conversations with students to find out what their hopes, expectations and fears for the future might be, we would learn a lot about them and they would be able to articulate these visions of themselves for the future,” Hock said. “We could then say our role as educators is to help them reach those goals and avoid those fears.”

U.S. school districts are already required to develop programs that help students with disabilities transition from high school to adulthood, Hock said. For its starting point, the KU team will be using two of those programs — one of which was also developed by KU researchers. Both programs involve conversations with students about their future goals, but Hock said they took different approaches — for instance, the one developed at KU puts a heavier emphasis on teaching students problem-solving skills.

The new study, Hock said, would mix and match elements of both programs.

“We think combining the two (programs) will have a significant effect on student transition outcomes and improve (areas) such as performance in school, engagement, GPA and achievement in their core classes,” Hock said.

The ultimate goal, Hock said, is to help those kids realize how much education can help them.

“We’re trying to help them realize what they are doing in education can be tools to help them achieve what they want to be once they move on into college or a career,” he said.