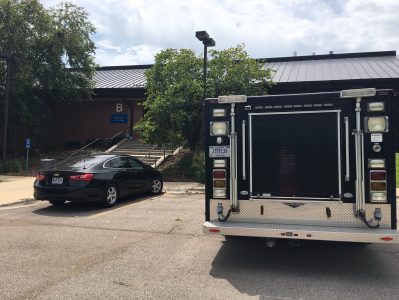 Several vehicles with U.S. government tags and other unmarked vehicles were parked outside the University of Kansas Life Sciences Research Laboratories, 1501 Wakarusa Drive on Tuesday, Aug. 20, 2019. Also parked outside the building was a large van that appeared to be a mobile crime lab.

The Federal Bureau of Investigation conducted an investigation on the University of Kansas campus Tuesday and also was at the home of a KU researcher.

Andy Hyland, a spokesman for KU, said the investigation posed no threat to public safety, and law enforcement was investigating alleged criminal activity that occurred on campus.

Bridget Patton, a spokeswoman for the FBI’s Kansas City, Mo., office, confirmed the FBI was on KU’s campus for an investigation, but she could not provide any details. She said the Lawrence Police Department assisted in the investigation.

“We were on campus, we did have a lawful presence, but I cannot give you specifics at this time because it is an ongoing matter,” Patton told the Journal-World.

The building remained closed at 2 p.m. when a reporter with the Journal-World tried to gain access. The reporter was stopped by a detective with the KU Public Safety Office.

Kim Grunewald, deputy general counsel with KU’s Office of the General Counsel, stepped outside Building B at the Life Sciences Research Laboratories complex to confirm that law enforcement officers were inside. Grunewald would only say there was no security issue or threat to the campus.

A large black van which appeared to be a mobile crime lab, with its engine running, was in the parking lot near Building B.

A caller who said he works at the research building in west Lawrence told the Journal-World that he and others were locked out of the building earlier today as a large contingent of law enforcement officers searched the building.

A separate source also alerted the Journal-World to a contingent of people wearing FBI-branded uniforms in the driveway of a home in the 4500 block of Cedar Ridge Court for much of Tuesday morning. Another vehicle that appeared to be a mobile crime lab also was on that site.

• Contact Journal-World reporters and editors at 785-832-7222 or email news@ljworld.com

Douglas County property records list the owner of the home as Feng Tao. Tao is an associate professor of chemical and petroleum engineering at KU. Information on a KU website lists Tao as having offices at the west Lawrence research center that was searched by the FBI.

When a Journal-World reporter went to the home Tuesday afternoon, a woman confirmed that Tao was in the house, but did not make him available. When asked why there were FBI agents at his office and at their home on Tuesday, she said she had no comment. In a subsequent phone call, the woman confirmed that Tao is her husband, but she offered no other comment about the incident.

It is not known what, if any, connection Tao may have to the alleged criminal activity that agents are investigating.

Patton, the spokeswoman for the FBI, confirmed that agents were at a second Lawrence location on Tuesday, but declined to give other details. Hyland, the KU spokesman, declined to provide any information beyond his limited initial statement when asked if Tao was the subject of a federal investigation. He also did not provide any additional information when asked about Tao’s employment status at KU.

According to KU websites, Tao — who has been an associate professor at KU since 2014 — does research related to chemical and energy transformation. More specifically, the Franklin (Feng) Tao Group focuses on “fundamental understanding of important catalytic reactions at the molecular level.”

An online resumé for Tao lists previous positions at the University of Notre Dame, the Lawrence Berkeley National Laboratory, Princeton University, and the National University of Singapore.