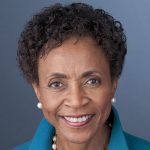 The graduating class of the University of Kansas plans to give a portrait of former Chancellor Bernadette Gray-Little to campus.

The Board of Class Officers, a committee representing each class at KU, announced plans to give a replica of the official painted portrait of Gray-Little to campus as the gift from the 2019 class, according to a KU news release.

The portrait will be unveiled at 3 p.m. Thursday during a ceremony at the Burge Union, 1565 Irving Hill Road. Gray-Little, who served as the university’s leader from 2009 to 2017, will not be in attendance.

Although the portrait will be unveiled in the union, where it will be placed has not yet been decided. It will likely hang in one of the university facilities that were constructed as part of the Central District redevelopment, which was initiated under Gray-Little’s leadership, according to the news release.

The $350 million Central District redevelopment, which was completed in 2018, included the reconstruction of the Burge Union and Stouffer Place Apartments and the construction of the Integrated Science Building, Downs Residence Hall and other facilities in the south-central part of campus.

Along with revamping campus, Gray-Little also led a $1.66 billion fundraising campaign, implemented new undergraduate curriculum and increased freshman class enrollment for five straight years, among other accomplishments, according to the university. She stepped down from the university in 2017 and now resides in Chapel Hill, N.C.

Nellie Kassebaum, president of the Board of Class Officers, or BOCO, and Collin Cox, vice president, led the process of choosing a gift for campus by gathering input from KU seniors. Cox said the portrait was an appropriate gift because Gray-Little was a transformational leader for the university.

“Perhaps most important to BOCO and this year’s seniors, Chancellor Gray-Little cared deeply about students and their experience at KU,” Cox said, according to the news release. “She talked often about being the first person in her family to attend college, and she believed deeply in the power of education to change a student’s life. For all these reasons, we felt strongly that our class gift ought to honor her and her commitment to student success at KU.”

— Editor’s note: This story has been updated to reflect that Gray-Little will not attend the unveiling.