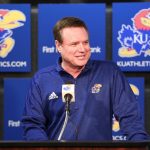 Some contract extensions for head coaches and athletic directors at Kansas universities will now need approval from Kansas Board of Regents officials before they can be offered.

The Regents approved the amended policy on athletic department contracts during its April meeting on Wednesday in Lawrence.

The amended policy requires a chancellor or president of an NCAA Division I university — which includes the University of Kansas, Kansas State University and Wichita State University — to request approval from the Regents chair or Regents president before a head coach or athletic director contract worth more than $500,000 can be offered.

However, the contract extension requests would not need to receive approval from the full Board of Regents, which consists of nine members and meets on a monthly basis.

Dennis Mullin, the Regents chair, told the Journal-World on Thursday that the purpose of the amended policy was to bring more transparency to the contract extension process.

“A lot of times we read about contracts after the fact,” Mullin said. “We wanted to establish more of a transparency in that process, but not be a hindrance to it in any way.”

While the policy would affect an extension for KU’s football coach Les Miles or basketball coach Bill Self, who said on Tuesday that he hoped to open contract extension talks soon, it does not apply to contracts for newly hired athletic directors or head coaches, Mullin said. The Regents chose to leave new hires out of the policy because a level of privacy is needed when hiring an employee from another organization, he said.

“We think that would be impossible to monitor in the middle of negotiations,” Mullin said.

Additionally, at the NCAA Division II level — which includes Emporia State, Pittsburg State and Fort Hays State — the policy states an athletic director or head coach cannot receive a contract worth more than the university president’s.