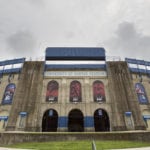 The University of Kansas' Memorial Stadium is pictured on Monday, Aug. 7, 2017.

• April 19 — $20M Allen Fieldhouse renovations likely to include concession, bathroom and other renovations

Multimillion-dollar renovations to Allen Fieldhouse and David Booth Kansas Memorial Stadium could be coming for KU Athletics, but details on what the projects would entail are not clear.

During its April meeting on Wednesday, the Kansas Board of Regents gave initial approval to a five-year capital improvement plan at Kansas universities, which included setting a series of dates for the $300 million worth of renovations to KU’s stadium and a one-time $20 million renovation to the fieldhouse.

The Regents will consider giving final approval to the five-year plan, which would begin in July 2020, during their May meeting.

Dennis Mullin, chair of the Kansas Board of Regents, said on Thursday that he did not know the specifics of any of the projects, but Regents documents show the projects would be funded through private donations.

Jim Marchiony, a spokesman for KU Athletics, told the Journal-World Thursday that the organization does not yet have any specifics to announce on what the Allen Fieldhouse renovation would entail.

The university previously announced a $350 million renovation of the stadium and other athletic facilities, funded by private donations collected through the “Raise the Chant” campaign. The football stadium portion of the project consists of renovations to end zone seating in the north and south sides, which would include closing the horseshoe shape of the stadium into a more bowl-like structure.

The football stadium portion was originally slated to begin after the conclusion of the 2018 season, but KU Athletic Director Jeff Long said in September that it would be pushed back while he focused on getting the football program in a better position.

Long later hired Les Miles, who won the 2007 NCAA National Championship with Louisiana State University, to lead the program. If the five-year capital improvement plan remains intact, the renovations would likely begin after Miles’ second season at the helm.