KU announces 2019-20 Common Book: a collection of work from 36 writers 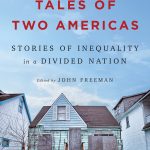 A collection that includes essays, short stories and poems from 36 acclaimed writers will serve as the University of Kansas’ 2019-2020 Common Book, KU announced Thursday.

“Tales of Two Americas: Stories of Inequality in a Divided Nation,” which was edited by John Freeman, was chosen because it provides “ample opportunities for all members of the KU community to explore their own experiences as they relate to the experiences of others,” according to a KU news release.

The KU Common Book program, which began with the 2012-2013 school year, is aimed at introducing first-year students to the current discussions happening at the university while also engaging the rest of the university community through related coursework and free public events. As in years past, new KU students will receive a copy of “Tales of Two Americas” during orientation and will participate in discussion groups during their first week on campus, the release said.

Previous KU Common Books included “Create Dangerously” by Edwidge Danticat in 2018, “Citizen: An American Lyric” by Claudia Rankine in 2017 and “Between the World and Me” by Ta-Nehisi Coates in 2016. While those books examined race, gender and immigration, Freeman’s collection “expands representation of varied identities and unites them under the broader umbrella of inequality and privilege” and will speak to numerous areas of study — journalism, psychology, sociology, Latin American and Caribbean studies, humanities, English, and American studies, KU said in its release.