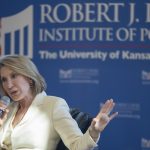 Carly Fiorina delivers the 2019 Dole Lecture at the Robert J. Dole Institute of Politics, Sunday, April 14, 2019. The first woman ever to lead a Fortune 50 company, Fiorina is the former CEO of HP and a best-selling author, and she was a 2016 candidate for president.

Politicians need to return to the qualities of true leadership that former U.S. Sen. Bob Dole personified if Washington is to solve problems, former Hewlett-Packard CEO and 2016 presidential candidate Carly Fiorina told an audience Sunday at the University of Kansas’ Robert J. Dole Institute of Politics.

In her 2019 Dole Institute lecture, Fiorina addressed the audience through responses to a series of questions posed by Dole Institute Director William Lacy and audience members. Fiorina said her answers came from her life experience as related in her latest book, “Find Your Way: Unleash Your Power and Highest Potential,” adding that she wrote the book as a critique of the current state of American politics.

Although leadership is often associated with positions of authority, we all have the potential to be leaders, Fiorina said. Leaders are those who don’t stay in their lanes but take chances to solve problems, Fiorina said. The four qualities of individual leadership are courage, character, a collaborative spirit and optimism, she said.

Unfortunately, those four qualities are rare in current American politics. Our politics have always reflected the culture, she said, and the current political environment reflects some of the worst aspects of popular culture: a win-at-all-cost attitude, and the fascination with celebrity for its own sake that is manifested on reality TV.

“It’s kind of like World Wide Wrestling,” she said of the current political atmosphere.

A re-emergence of true leadership was needed to overcome the current morass of political scorekeeping, Fiorina said. That leadership would reflect values that Dole provided during his years on the national stage in the U.S. Senate. Dole bundled the four qualities of leadership effectively to solve problems through bipartisan consensus, she said.

“The reason he was a collaborator was he was a humble man,” she said. “He realized, ‘Maybe I need another point of view here, maybe someone knows something I don’t know.'” 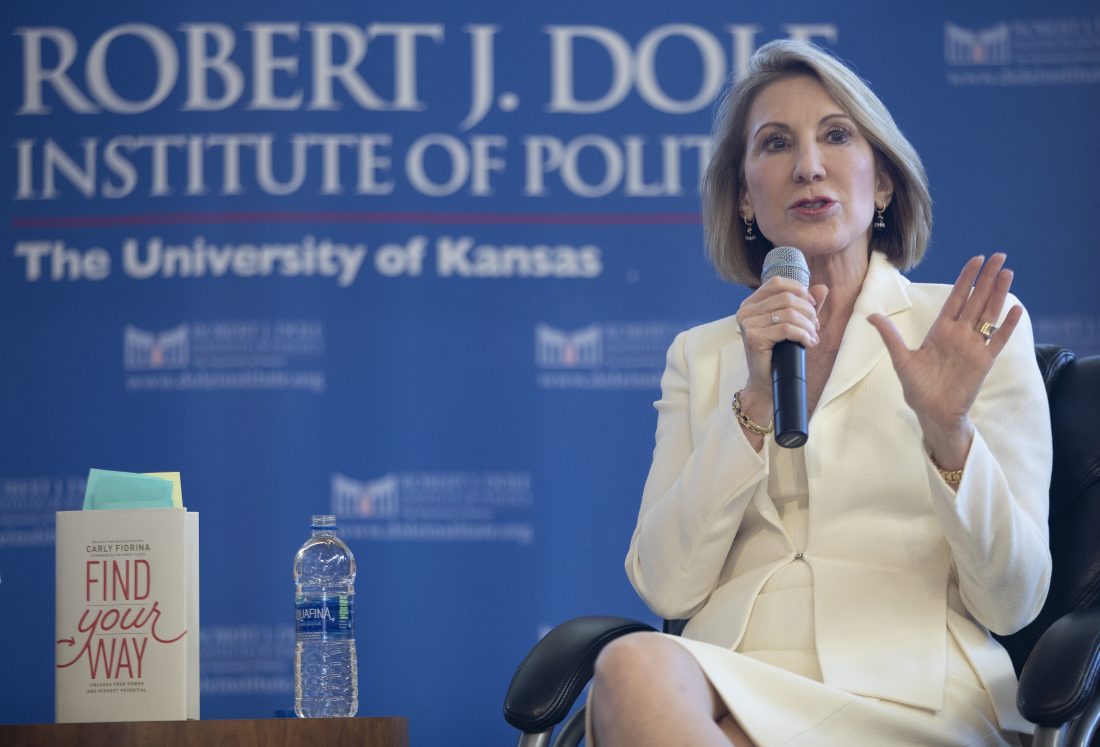 Carly Fiorina delivers the 2019 Dole Lecture at the Robert J. Dole Institute of Politics, Sunday, April 14, 2019. The first woman ever to lead a Fortune 50 company, Fiorina is the former CEO of HP and a best-selling author, and she was a 2016 candidate for president.

She developed her views on leadership during a career that spanned her initial position as a temporary secretary in a nine-person real estate office to CEO of the Fortune 500 tech giant Hewlett-Packard, Fiorina said. She took the secretarial job with undergraduate degrees in medieval history and philosophy and a year in law school, which she hated. Her career took off after her day-to-day performance as a secretary drew the attention of two clients of the firm. They offered her a position with AT&T.

“They said, ‘We’ve been watching you. We think you can do more,'” she said. “Those two men saw the potential in me.”

That experience led to what Fiorina said was the best career advice she could give to the KU students in the audience.

She did have to find the courage to overcome fears associated with being a woman in a male-dominated field. The first client with AT&T who she worked with tried to play on her self-doubts by scheduling a meeting in a strip club, she said. Her response was putting on her best female power suit and going through with the meeting.

“That guy was trying to give me a hard time,” she said. “We went on to become great partners. I learned later that he was also afraid of me.”

The strip club experience was not the last time she dealt with male condescension, Fiorina said. In her first interview after taking over at HP, a prominent business editor asked who designed her suits, and political reporters routinely asked her campaign manager about her shoes, she said.

“Things are different when you are different,” she said. “You don’t wear a chip on your shoulder, and you don’t hide under your shell.”

During Fiorina’s tenure as CEO of HP from 1999 to 2005, the company increased its profits and gained product market share. She also oversaw what was the largest technology merger at that time with the company’s acquisition of rival computer manufacturer Compaq. Fiorina said a key to that success was her insistence that the company listen to what its customers were saying about Hewlett-Packard. The company learned that it and its products were viewed as slow, fat, complicated, pricy and lacking in innovation.

The customer assessment provided a critique that Hewlett-Packard employees had to listen to and address, Fiorina said. That wide-eyed reality check is the foundation leaders need to make positive change, she said.

“It’s what I tell people when I teach problem-solving,” she said. “You have to have a complete, clear view of the current situation, and then you have to have it aligned with where you want to go.”