Board of Regents approves funding increase for state universities; KU would get $33 million 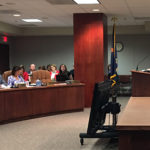 University of Kansas Chancellor Douglas Girod speaks to the Kansas Board of Regents at its meeting Thursday, Sept. 20, 2018, in Topeka.

TOPEKA — State universities in Kansas would see an $85 million funding increase over the next two years under a budget proposal that the Kansas Board of Regents approved on Thursday.

Now, university leaders will have to wait and see whether state legislators will approve the request.

“Our hope is that this will happen,” said University of Kansas Chancellor Douglas Girod. If the request is approved, KU will see “somewhere in the range of $33 million” of those dollars across all its campuses, Girod said.

The funds requested by the regents are restoration for dollars the Kansas Legislature cut in 2009.

The board’s official budget document will be submitted to the governor and Legislature by Oct. 1.

The Board of Regents held a budget workshop in August to further understand each state university’s budget and how enrollment affects tuition revenues and campus cash reserves.

At the Lawrence campus, where university leaders are looking for $20 million in budget cuts, “the dollars would help the university take care of their people and the challenges they have been facing,” Girod said.

• Approved a request from Girod to reduce the online tuition rate for KU’s Doctor of Educational Leadership Policy Studies course. The online tuition will drop $20 from its current rate of $605 to $585 per credit hour. The online course is designed for students in the Vancouver, Canada, area, according to a memo provided to the Board of Regents. The memo acknowledged that one of the reasons KU sought the reduction in fees is that no students enrolled in the class in fiscal year 2018.