When searching for on-campus housing, the cheapest residence hall might be off campus 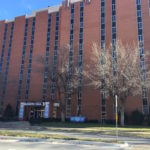 Naismith Hall, a for-profit residence hall, located next door to the KU campus has always had a reputation of being an expensive place to live. However, that is not the case. The outside of the building is seen here on Friday, Dec. 14, 2018.

Evan Schmidt was working out in the fitness room of Naismith Hall Friday morning before heading next door to KU’s School of Business for his last final of the fall semester.

A senior business major, Schmidt lives in the private residence hall, at 1800 Naismith Drive, because he says it’s convenient. Not only is it located near his classes, he appreciates not having to cook and that housekeeping service is included in the cost of his standard room.

“It’s a good value for the price,” Schmidt said. 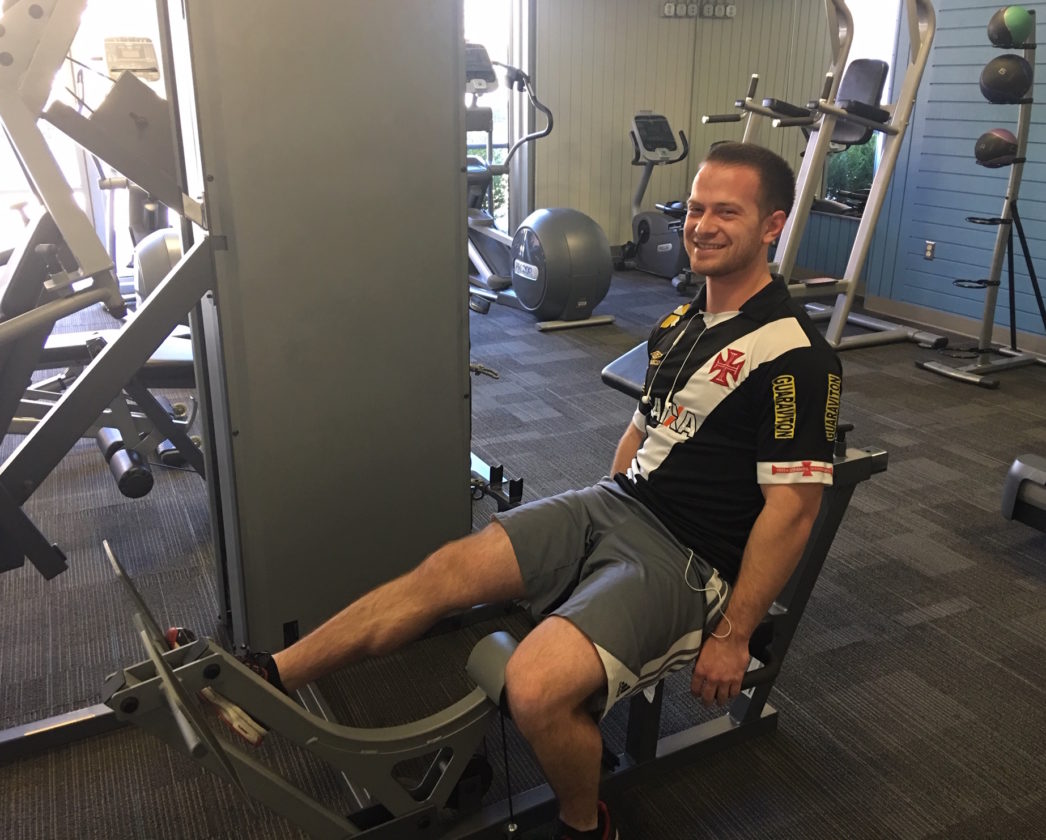 That is a sign of how the world is changing when it comes to student living at KU. For decades, if price was your primary consideration, the university-owned dormitories and dining hall were almost always the winning option. After all, the KU-owned facilities had a built-in advantage when it came to keeping prices low: They operate as a nonprofit entity.

But the world has begun to flip. Now, Naismith Hall — operated by a for-profit company out of New York — is often the low-cost option for KU housing. A double occupancy room with 14 meals per week is $1,770 cheaper than the same plan at KU.

What has changed since the days when Naismith Hall opened more than 50 years ago, and it was considered both posh and expensive due to amenities like a gated swimming pool? Well, for one, KU dormitories have gotten a lot newer. The university has spent millions renovating or building new housing facilities. But one consequence has been that prices have been on a steady rise.

In fact, KU now has the highest housing prices of any regents university in Kansas, and it is highest by a considerable amount. For the next school year, university leaders have decided to hold housing and dining rates steady for the university’s most popular housing option. But even after forgoing a price increase, KU’s housing and dining rate is still about $900 more per school year than the next closest school, Kansas State.

When you start comparing KU against other, smaller state schools, the difference is even more dramatic. Here’s a look at the prices for all the regents schools, according to data recently submitted to the Kansas Board of Regents. The prices are based on what the regents call a “modest double occupancy room with limited dining plan” for a two-semester school year.

Sarah Waters, director of student housing at KU, said there is an important distinction to keep in mind with the KU rates. The university has undergone a major effort to renovate and modernize its residence halls. A typical rate at KU is for a renovated room, while that may not always be the case at other schools.

“The Regents comparison rate at other schools may have been a comparison room type for an unrenovated space,” Waters said.

Waters said KU also keeps its dorms open longer than many other regents institutions. For example, KU’s dorms are open during Thanksgiving and spring breaks for no extra charge to students. Unlimited laundry also is included in the price at KU, Waters said.

The cost of renovation, though, is a big driver in the cost equation at KU. Those pressures are beginning to show up on the finances of KU’s student housing division. According to figures provided to the Board of Regents, KU’s student housing division in fiscal year 2017 had annual debt payments of $6.3 million. Last year — fiscal year 2018, which ended on June 30 — they had grown to $9.6 million. By fiscal year 2020, annual debt payments are expected to grow to $14.2 million.

What’s the picture look like at Naismith Hall? As a private company, the building’s financial statements could not be accessed by the Journal-World. But officials with the New York-based Bromley Companies, which bought Naismith Hall in 2013, said they thought they were able to operate more efficiently as a privately-owned company than KU can as a state-owned nonprofit entity.

For example, if a policy or process isn’t working effectively or efficiently, they will change it immediately, without having to go through a lengthy approval process to create and affect change, said Melissa Phillips, director of communications with Bromley Companies.

“In terms of finances, since we were able to purchase the building at a good price, we have a much lower debt service,” Phillips said. “This is another cost that we don’t have to include within our rates.”

Naismith has undergone some renovation. When Bromley took ownership in 2013, the 10-story, 255-room building needed an extensive update.

The new owners opened up the lobby, put down new flooring and added a laundry room, study rooms and a community kitchen on the first floor. They removed the outdated movie theater and transformed it into a fitness room where residents can exercise 24/7. 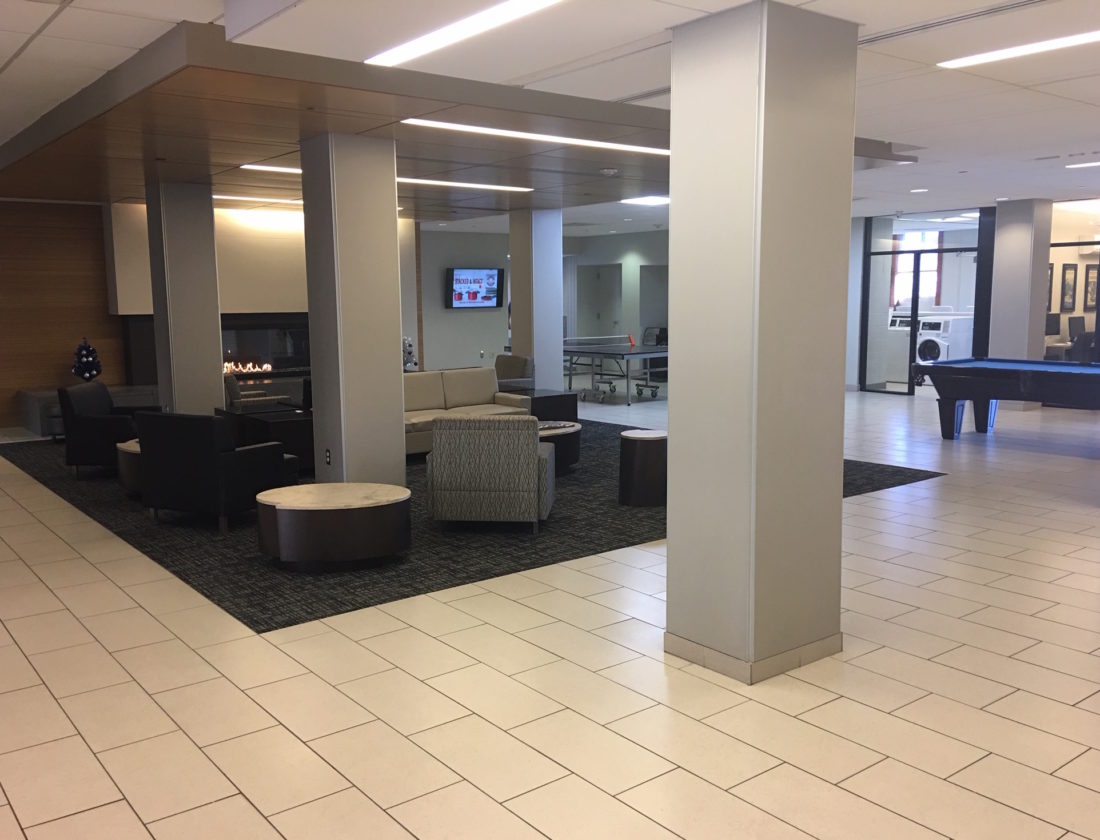 The remodeled lobby at Naismith Hall offers a common area, plus a computer room and several study rooms, and laundry facility and community kitchen. Most of the students have left for winter break on Friday, Dec. 14, 2018.

While competition may be heating up, KU is still serving large numbers of university students, although vacancy rates have risen some in recent years. In fiscal year 2017, KU student housing had an occupancy rate of 99.2 percent. In 2018, occupancy dropped to 94.6 percent and is projected to drop to 93.4 percent in this current fiscal year. Next fiscal year, though, KU is projecting occupancy levels to grow to 97 percent.

Waters said KU student housing serves about 80 percent of the new freshman class each year, with over 3,300 first-year students living on campus.

How the competition between public and private housing shapes up in future years likely will be critical for KU to monitor, especially as residential areas adjacent to campus continue to redevelop.

Sophomore Cayden Fairman is a resident assistant at Naismith who gets his room and board for free. But he’s guessing that more students are going to take a harder look at the private options. When he was scrambling to find a room as a freshman on a tight budget, he didn’t consider Naismith Hall at first. He thought it would be too expensive since it was private.

“I was skeptical, thinking what does privately owned mean?” Fairman said.