Dick Lipsey poses with his dog Jasper at his home in Lawrence while wearing a medal he won for completing 50 marathons in 50 states, on June 8, 2022.

Most 77-year-olds might think twice about running a single marathon, let alone two marathons in three days, but that’s what Lawrence resident Dick Lipsey managed to do to complete his goal of running 50 marathons in 50 states.

Lipsey has been a runner for decades and has run hundreds of races across the country, but only in the last decade did he set his sights on running a marathon in every state, he said. He finished marathons in the farthest reaches of the country — Hawaii and Alaska — early in his running career, and he completed his last two marathons within a few days of each other. The first of those was in Bear, Delaware, on June 1, and the second in Douglassville, Pennsylvania, on June 3.

“It all began when I got a cardiac pacemaker,” Lipsey said.

Lipsey and his wife, Lynne Lipsey, had retired in 2008 and moved from Lawrence to Estes Park, Colorado, where a doctor identified a problem with his heart in 2009, he said.

Lynne Lipsey, left, and Dick Lipsey are pictured at the halfway station during the Trail-Rail 33-mile run in June of 2015 in St. Regis, Montana.

“In 2004, I would run a mile and I would have to stop and walk, and that got increasingly worse,” Lipsey said.

Within a week of a doctor identifying the problem, Lipsey said he had a pacemaker installed. He started running again with a slow pace of run-walk-run and set a goal to complete a marathon within a year of getting the pacemaker. With Lynne cheering him on and a few other friends in his corner, he managed to complete the Blue Springs Trail Marathon in 2010 in Blue Springs, Missouri.

Despite the pacemaker and his new slower pace, Lipsey knew his running career was far from over.

“My next goal was to run the JFK 50 Mile. President Kennedy in the early ’60s learned that Teddy Roosevelt thought that every Marine should be able to run 50 miles, so Kennedy instituted that kind of as a policy back then. Legend has it, Robert Kennedy was the first person to do it and he did it in his loafers and his jacket,” Lipsey said.

In 2012, Lipsey completed the JFK 50 Mile; in fact, he completed two 50-mile challenges that year. The first was the Beast of Burden Summer Ultra in Lockport, New York, in August, then the 50th Anniversary JFK 50 Mile run in December in Boonsboro, Maryland.

Dick Lipsey is shown running his favorite race, the JFK 50 Mile in November 2012 in Boonsboro, Maryland.

Maybe it was hearing the number 50 so many times that year or maybe he just needed another feat to accomplish, but by the end of 2012 he knew that he wanted to accomplish running a marathon in every state.

“After I got the pacemaker, I couldn’t run as seriously as I felt like I could before. I was so much slower then. That seemed like a reasonable goal,” Lipsey said.

Lipsey said he started running in high school as a sprinter, but he didn’t take it seriously until he joined the Army, specifically when he entered an advanced infantry course in 1976.

“The commanding general there had been a platoon leader in Korea, and when some of his draftees were overrun by a Chinese attack, they were set down by the side of the road and died or were captured and never seen again. But it made him a runner and every place he had gone subsequently, people under his command had to run,” Lipsey said.

The commander required everyone in the course to complete a 5-mile run in under 50 minutes before graduating, and most of the soldiers were not prepared, including Lipsey.

“I had never even contemplated that before then, but I made it. I finished the advanced course. At that time, in ’76, half the guys were smokers, nobody ran; they might play handball or racquetball or something. I got through that and I kept with running after that,” Lipsey said.

A few years later, at the age of 34, when he was working in Washington, D.C., as an ROTC coordinator, Lipsey ran his first full marathon in Frederick, Maryland. It was called the Life and Health Marathon, and he finished in three hours and 50 minutes. He then completed nine more marathons, including in Alaska and Hawaii, and dozens of shorter races before coming to Lawrence to work for the ROTC program at the University of Kansas in 1985.

In Lawrence, Lipsey said he joined a club at KU called Mad Dogs and Englishmen. The club was named for a 1931 Noël Coward song that describes Englishmen as the only people foolish enough to “go out in the midday sun” — an observation originally attributed to Rudyard Kipling. The club was composed of faculty and staff members who would run about 3 miles three days a week at lunchtime.

“We had a couple of Englishmen and an expatriate Australian, from England originally, and a few others like that, and it kind of fit. We were out in the midday sun,” Lipsey said.

The club was started in 1973 and survived until 2018, when it couldn’t attract enough members. Lipsey ran hundreds of races with the club and was responsible for maintaining the club’s website and records until the group disbanded. 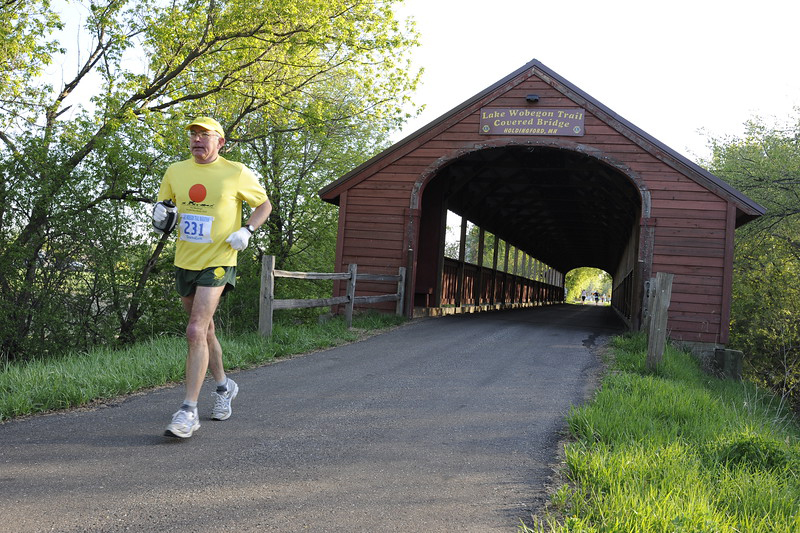 While at the university, Lipsey started looking for a new career and settled on journalism. He said his original goal as a journalist was to work for an international news bureau in Russia.

“I had a degree in Soviet studies, and I had taken Russian language courses at George Washington (University) before I came here, and in my mid-40s there was no obvious other career path for me,” Lipsey said.

After finishing his journalism degree at KU he didn’t move to Russia, but instead got a position with The Associated Press in 1990. The job was based in Kansas City, and it was not conducive to his midday running routine that he had started at KU.

“When I started at the AP I had really lousy hours. I got a lot of weekends and nights,” Lipsey said.

In his first few years as a reporter he took it easy and ran only short-distance races when he could find the time. Now that he has finished his goal of 50 marathons in 50 states, he plans to take it easy again.

“I have gotten to a point that I am painfully slow,” Lipsey said.

Running has left Lipsey with a few minor injuries, including a dislocated toe. He is still a part of the runLawrence club but plans only to help keep race records for other members, he said. But you might still find him moving “painfully slow” with his dog Jasper on his favorite Lawrence trail on the levee next to the Kansas River.

“I was never fond of running (just) marathons. I like to run everything,” Lipsey said. “I really never ran more than one or two marathons a year … but I’m up to 68 marathons, including Washington, D.C.”

Dick Lipsey poses with a plaque on June, 18, 2022, made by his daughters to celebrate his finishing 50 marathons in 50 states.

Volunteer has been helping LMH Health for nearly 3 decades

When patients come to LMH Health for care, the first face they see might not be a doctor or a nurse, but a ...

The global game: Lawrence residents gather to watch and celebrate the World Cup