Walls of Terry Jacobsen's property in southern Lawrence were destroyed by the May 28, 2019, tornado that ripped through Douglas County and other parts of northeast Kansas.

Since May 28, 2019, rural Douglas County residents have cleaned up debris, rebuilt destroyed structures and worked to reopen businesses that were shuttered after an EF-4 tornado ripped through the area.

As Thursday marks the twister’s one-year anniversary, area residents are still recovering from the disaster, which injured more than a dozen people, destroyed 13 homes and damaged at least another 70 for a total of about $22 million in damage to homes and other structures in Douglas County.

With so much damage, recovery efforts may take much longer than a year. Two county residents and a local firefighter who operates a dairy farm near Linwood in Leavenworth County — arguably the hardest-hit area of the event — all told the Journal-World last week that they were still in cleanup and rebuild mode.

While they are at different stages of recovery, they all said they may be working on projects for years to come.

“People ask us all the time when we’ll be back to business or back to normal,” said Rob Leach, who owns and operates Lin-Crest Farm in Linwood. “It can’t be rebuilt in a year. It’s just going to happen as soon as it happens.”

John Pendleton, co-owner of Pendleton’s Country Market just east of Lawrence, said his property was in a similar situation. He and his wife, Karen, have spent the last year rebuilding several greenhouses on their property while also cleaning up debris throughout their land.

While showing a Journal-World reporter around the property last week, the Pendletons pointed out scattered nails, plastic bags and fragments of wood partially buried in the area that once was a dirt parking lot.

“We’ve got things we’ll be doing that are tornado related for the next few years, actually,” Pendleton said.

Terry Jacobsen, who owns property just south of Lawrence, said he and his family lost their home of 19 years because of the tornado. While the house’s exterior was severely damaged, Jacobsen said the foundation and structure of the house remained, allowing the family to rebuild.

He said they were planning to move back into the renovated house this week, exactly a year later. But they too will still have debris to clean up for years to come.

“Every time we’re out there, we still see debris sticking up out of the dirt,” he said. “We figure we’ll spend the next 19 years picking up debris that will keep coming up.”

Despite the tragedy of the tornado, both Pendleton and Jacobsen said they decided to look at the aftermath of the tornado as an opportunity to improve.

Pendleton said the tornado, which destroyed five of the market’s seven greenhouses, provided an opportunity for the Pendletons to downsize their business. It also let them build a new, more welcoming entrance to the market, which customers can now see clearly from the rural roads. The Pendletons also decided to remodel the interior of their damaged 100-year-old home, which sits just feet from the market.

“Now is the time to make improvements,” Pendleton said. 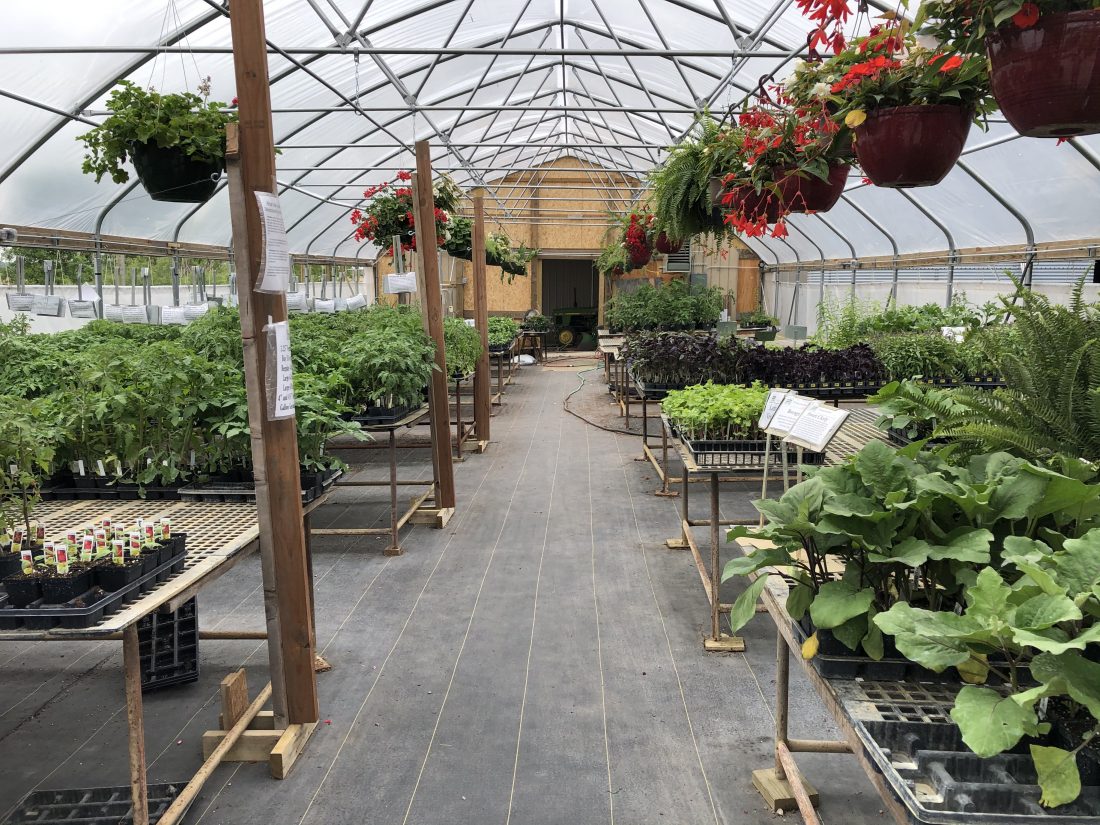 The Pendletons rebuilt some of the greenhouses on their property, which allowed them to downsize their market for a more streamlined business. 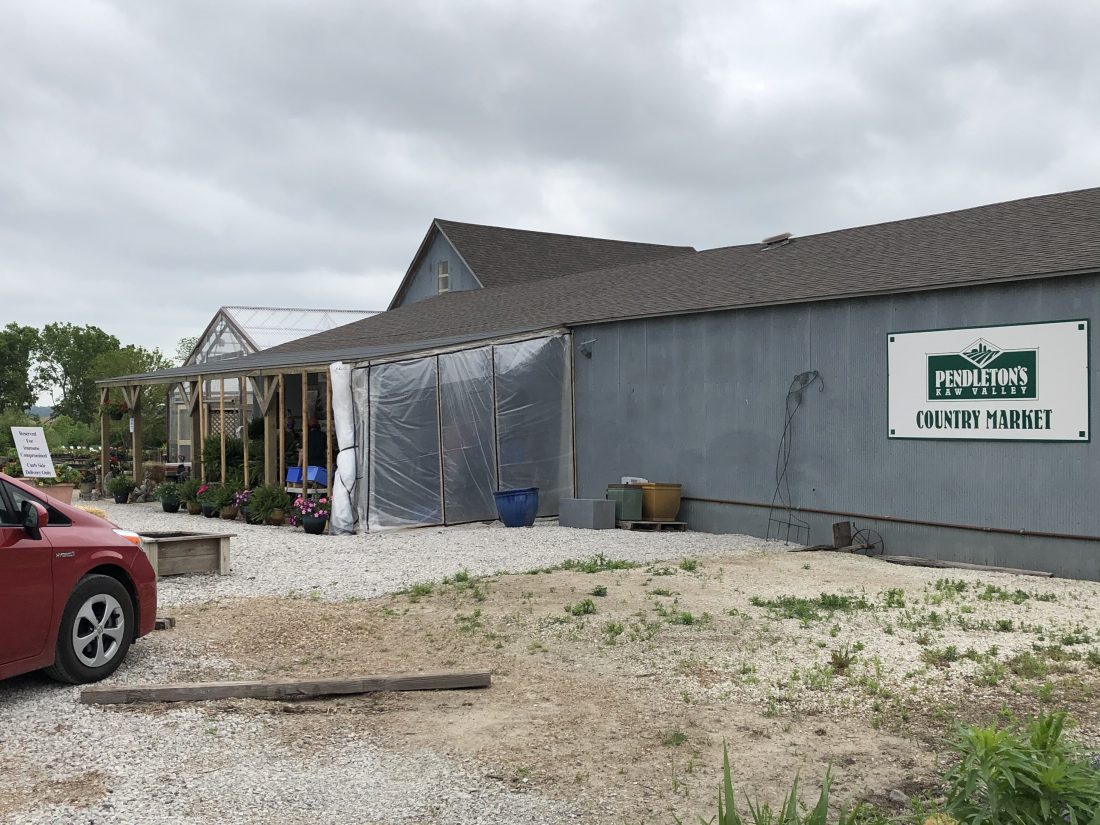 Karen and John Pendleton built a new entrance to their country market after the May 2019 tornado damaged much of their property. John said he felt the disaster gave them the opportunity to make improvements, like the new entrance. 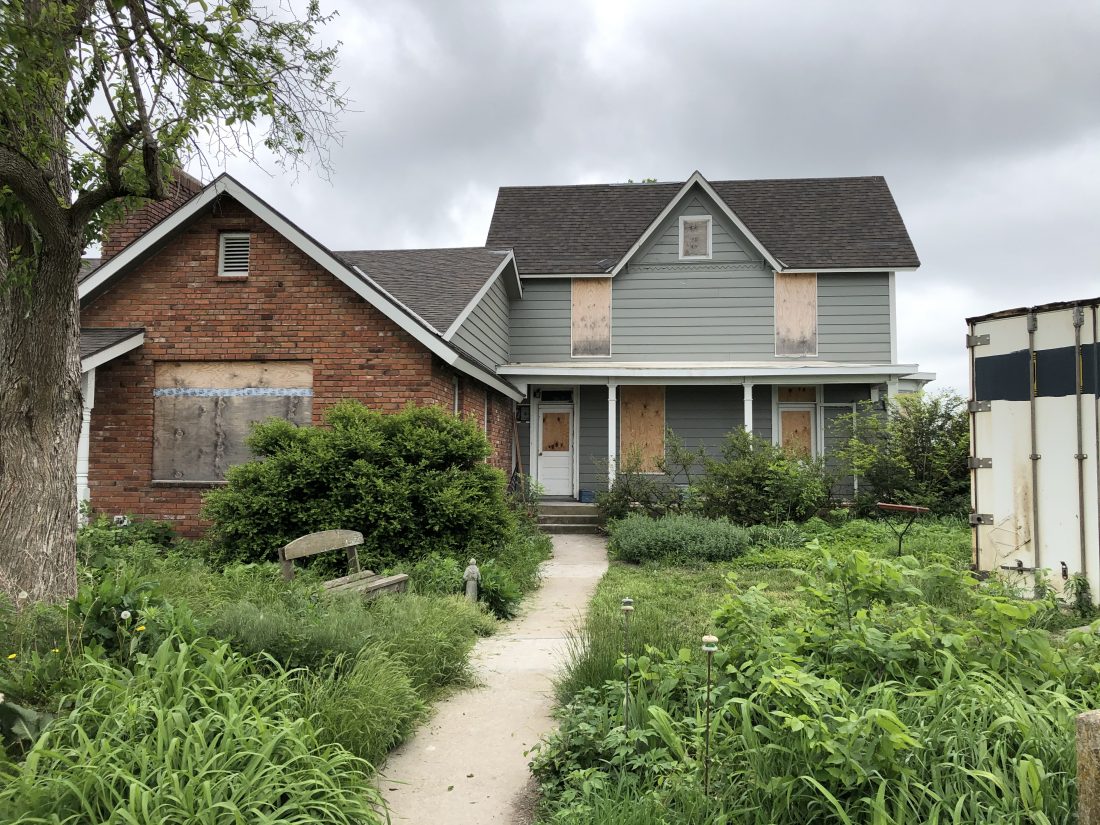 Windows of Karen and John Pendleton’s home are boarded up as they remodel the 100-year-old structure after the May 2019 tornado damaged it. With repairs needed for the damaged portions, they chose to remodel the whole home, John said.

Additionally, the Pendletons received a ton of help from community members and their market’s customers to get their business back up and running. Pendleton said he felt fortunate for the market to be open this spring, as it has seen an increase in business. He suspects that’s because the coronavirus pandemic has been keeping many people at home, leading some to pick up new hobbies like gardening.

Jacobsen has been able to find a silver lining, as well: he chose to remodel his home to better fit his family’s current needs. Some of the changes that he and his family — his wife, Robin, his mother and seven children, three of whom currently live at home — chose to make included expanding the kitchen and dining room to allow for the children’s extended families to be able to fit in the area. They also reorganized some of the bedrooms and bathrooms to give the children who still live at home some more personal space.

Now that the family is moving back in, Jacobsen said they were feeling pretty good.

“We set out in the beginning of this and decided the lot was cast and there wasn’t anything we could do to undo it,” Jacobsen said. “We decided to make the best of it and stay positive.

“So we made some upgrades and some changes to the rooms with the thought of being there another 19 years and being elderly people there at some point,” he added. 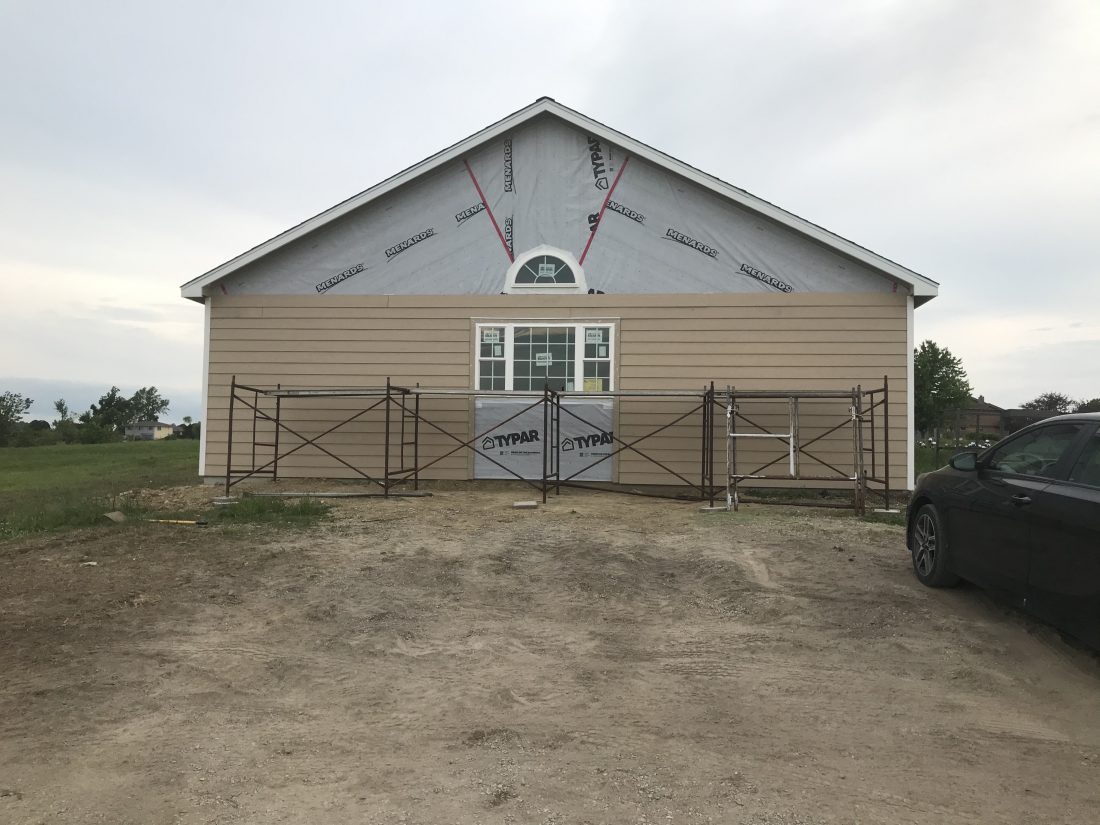 A side wall of Terry Jacobsen’s property in southern Lawrence recently stands rebuilt after it was destroyed in a May 2019 tornado. 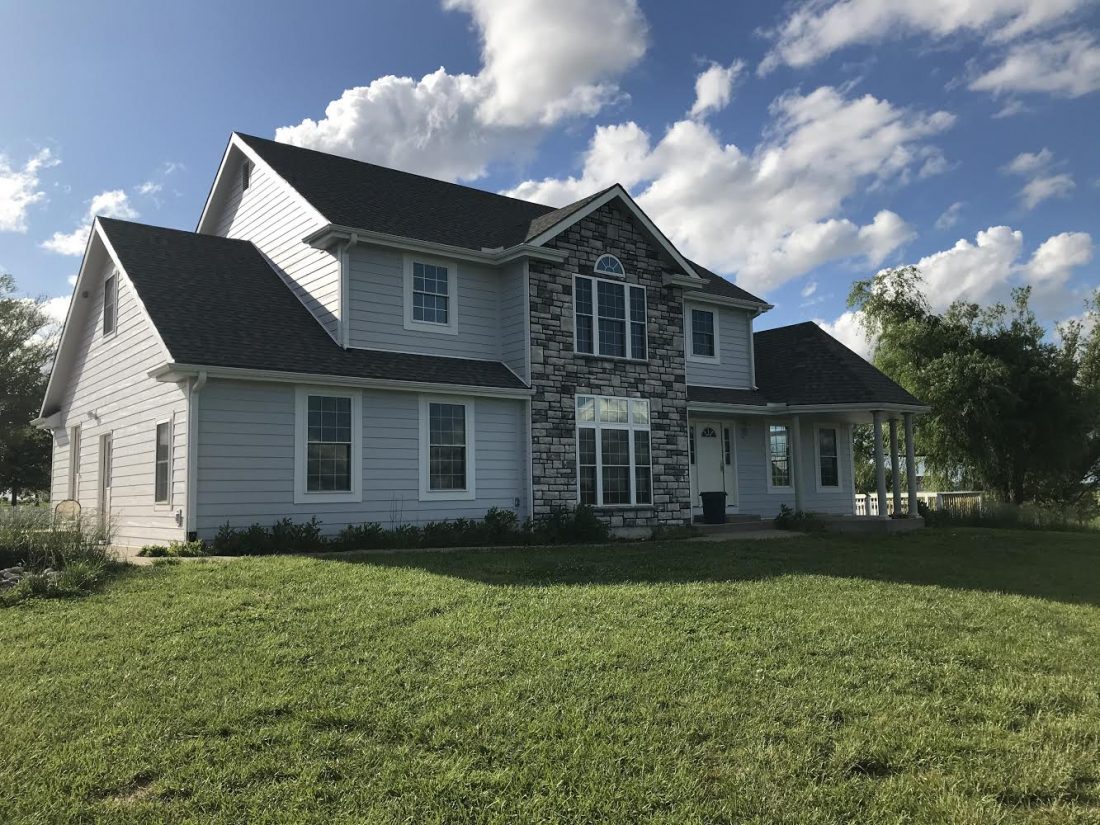 The Jacobsen family home sits remodeled after it was severely damaged in the May 2019 tornado. Terry Jacobsen said the family was ready to move back into the house this week, exactly a year after the disaster.

While the Pendletons have been able to reopen their business and the Jacobsens are moving back into their home, others have not been so lucky.

Leach said he hasn’t yet been able to restart production on his dairy farm, but he’s hoping to reopen a scaled-down version later this summer. In the meantime, he has much of the operation’s cattle housed at farms of friends in other states.

The Leaches lost almost every building on their farm except for a small chicken coop that was built in the early 1900s, which is now used for storage. He said he and his family have rebuilt some of the facilities, and they hope to eventually get up to a total of seven newly built structures.

But that will come down to whether they can afford it, Leach said. Some of the barns on his property were not insured because they were old and seemingly not worth such an investment. But the tornado has made him realize how useful they really were.

“You don’t insure everything thinking you’re going to lose it all tomorrow,” Leach said. “An older building like that, you don’t think it’s worth the money to insure, but you sure wish you had it now.” 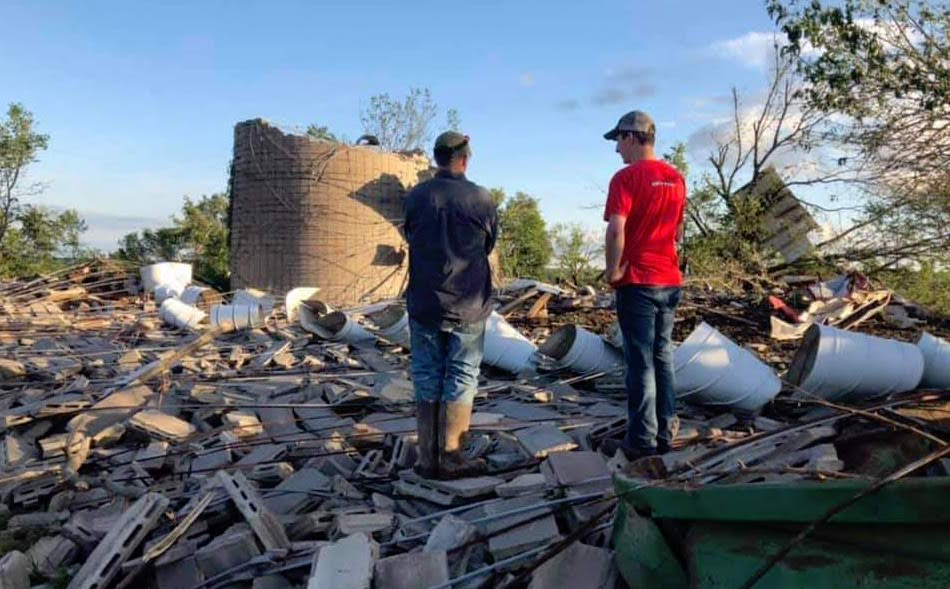 A pile of rubble littered Rob Leach’s family dairy farm near Linwood after the May 2019 tornado. Leach said the tornado destroyed all of the farm’s facilities and he hopes to eventually rebuild seven of them. 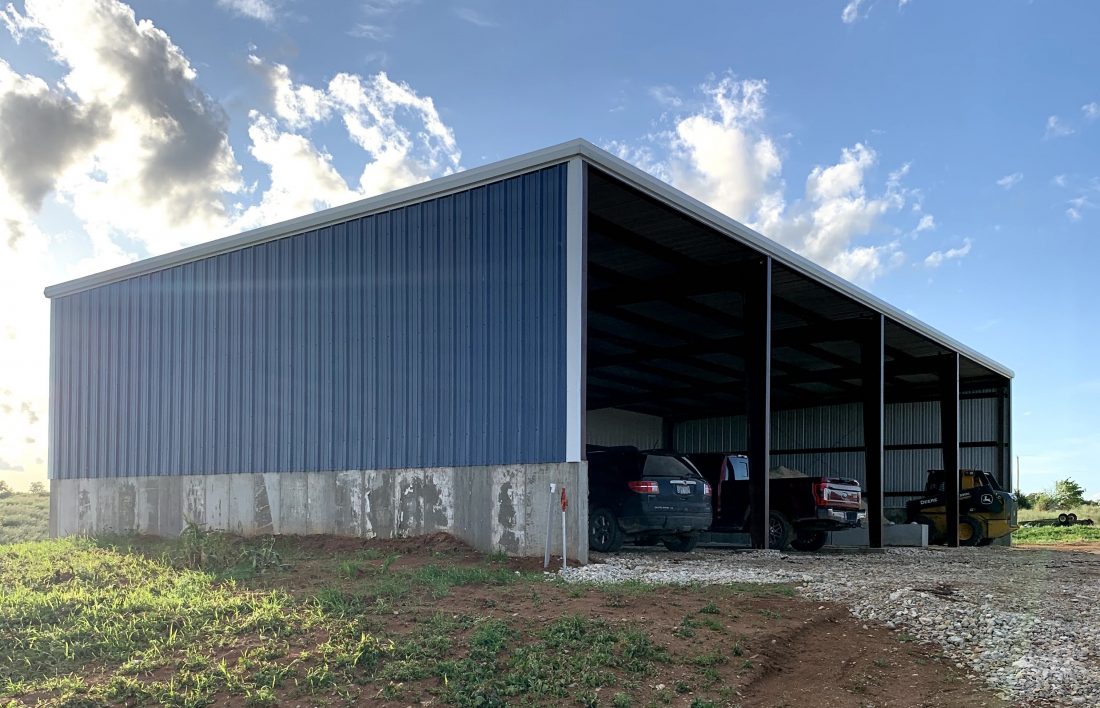 A recently built storage structure sits on Rob Leach’s family farm near Linwood about a year after all the farm’s facilities were destroyed by the May 2019 tornado.

Despite the tragic event, they all said they were grateful for the help they received from others in their time of need.

While many people who knew the Jacobsens, Leaches and Pendletons helped out, many other strangers also came to their properties to help immediately after the event. Leach and Pendleton said they felt lucky that the tornado happened last year, rather than this year during the global coronavirus pandemic, which likely would have stopped many from being able to come out to help.

Leach said he could never repay the kindness he was shown by others; his family, he said, was “very lucky.”

For the Jacobsen family, the help they received — including many donations of water and food — highlighted the benefits of living in a caring community.

“It was very humbling but also very much appreciated,” Jacobsen said. “It showed us what the heart of Lawrence is really like, and it helps us understand better why we love living here.” 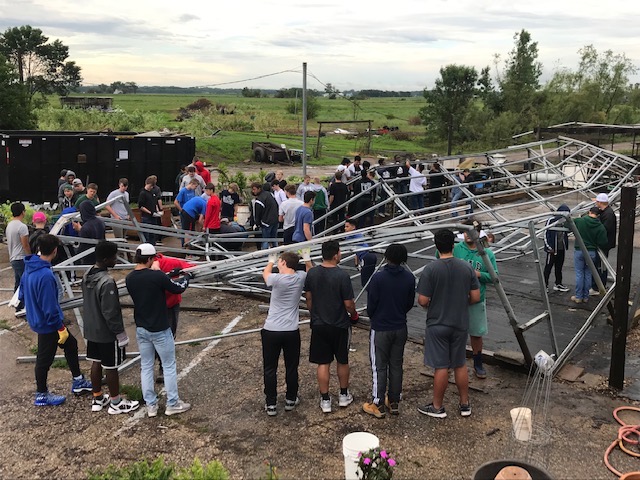 The Free State High School football team helps clean up debris from the Pendleton Country Market after the May 2019 tornado destroyed many of the market’s greenhouses.