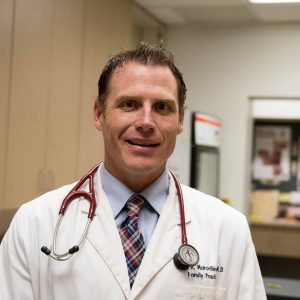 Dr. Thomas Marcellino was appointed as Douglas County's health officer in 2012 by the Lawrence-Douglas County Health Board.

On Monday, Douglas County will move into Phase 1.5 of Gov. Laura Kelly’s reopening process, meaning dine-in restaurants, fitness centers and libraries will be allowed to open, most on a limited basis.

While not all of Lawrence’s restaurants will choose to reopen that day, and though the Lawrence Public Library won’t open to the public until later, residents will have more options for how to spend their days.

Douglas County originally had stricter measures in place for reopening than the state did, but on Thursday Douglas County’s health officer, Dr. Thomas Marcellino, announced that the county would align its reopening procedures with the governor’s phased plan.

On Friday morning, Marcellino answered questions for the Journal-World about that decision and provided advice for residents to mitigate their risk in the coming weeks.

Should people who are over a certain age or part of a certain high-risk group continue to avoid eating out and participating in other activities?

Marcellino said the recommendation for high-risk and elderly groups is to continue interacting in public only for essential functions.

“It’s pretty simple, really. We all need to think about risk, and we all need to do the best we can to avoid unnecessary risk,” he said. “Just because something is available or open does not mean that it’s not risky to do.”

Marcellino noted that restaurants pose a particular risk because customers will not be wearing masks at all times while inside.

“Each one of us has to decide and look at our potential risk factors and minimize risk factors as much as possible in our everyday lives,” he said.

What steps can businesses and customers take to mitigate risk within restaurants?

Customers in restaurants need to be kept 6 feet apart because that is believed to be a safe distance to avoid the exposure of droplets from others conversing at normal volumes, Marcellino said.

But sneezes and coughs can travel much farther and should be confined within an elbow or a mask. If people have any sort of cold symptoms, they need to stay home.

Marcellino said it was important that customers, not tables, remain 6 feet apart, noting that the distance should be measured from the back of one chair to another. He also offered general advice for customers planning to go to restaurants.

When entering a restaurant, Marcellino recommends that customers wear a cloth face mask until they are seated.

“That’s a high-risk time, walking past other people,” he said.

People should avoid gathering in lines by the bathroom or entrance to the restaurant. Reservations will be important, Marcellino noted. Eating outside is a safer option than eating indoors. Lastly, Marcellino recommends that customers take hand sanitizer if they go to a restaurant so that they can clean their hands in case they need to touch a door handle or other common surface.

As the county and state reopen, what are some of Marcellino’s concerns?

Though Douglas County thus far has avoided an outbreak and has lower case numbers than many of the surrounding counties, Marcellino said our county could easily have a spike.

He’s concerned that because of the low case numbers in the community, residents of Douglas County will become “lackadaisical” about following guidelines and restrictions.

“That’s a slippery slope that could invite the virus to have a bigger effect in our community,” he said.

How should people go about making their own risk-versus-reward calculations given what is known and unknown about the virus?

Many dynamics are at play when it comes to the human condition, Marcellino said, and it will be important to keep a close eye on how this pandemic is affecting children, those who struggle with mental illness and the elderly, who might be struggling with isolation.

“Each one of us has to operate under a calculated risk scenario,” Marcellino said. “Obviously social isolation has its own effects downstream when it comes to mental health.”

Marcellino said it would be important to find a middle road. For now, it’s important not to go from “zero to 60 all at once,” Marcellino said. Health officials must analyze how the virus responds to the reopening of the state.

On Thursday, the Unified Command task force unveiled a “Smart and Safe: Reopening Douglas County Community Scorecard.” This scorecard, which will be updated every Friday, lists specific goals and benchmarks for Douglas County’s medical surge capacity and community spread of disease.

On Friday, Douglas County was on target for all of its goals, which included having fewer than five cases of COVID-19 in one week caused by community transmission, having no outbreaks and having fewer than 10 active cases. On the scorecard, an active case is defined as “a lab-confirmed case that has either not recovered or met the criteria for release from isolation.”

Marcellino said the county would use these benchmarks to determine whether Douglas County needed further restrictions. He also said the benchmarks would consistently be reviewed and updated.

If Douglas County saw a surge in cases, it wouldn’t necessarily change these benchmarks dramatically, Marcellino said, noting that leaders must ask what population is involved in the surge — if it’s a low-risk population, they likely may not require any hospitalization.

“It’s a very dynamic process with lots of moving parts and lots of factors. And so that’s why we’re using a team approach,” Marcellino said.

Why has Douglas County been able to hold such low numbers of cases when surrounding counties have cases in the hundreds?

Marcellino cited two factors. First, residents took guidelines and social distancing seriously at the beginning, leading to a low rate of community transmission. Second, Douglas County has not seen an outbreak in a high-density facility, such as correctional facilities, meat-packing plants or nursing homes.

“What is going to be a challenge is when we open up the economy more; workers traveling between Topeka and Kansas City are going to need to be very careful about monitoring their symptoms,” Marcellino said. “Because once residents start leaving Douglas County and returning on a frequent basis, that sets us up for exposure from higher-risk areas.”

What prompted Douglas County to align with the governor’s plan?

Marcellino said he decided to align with the governor’s plan because he thought Douglas County was doing well in curbing the spread of the virus.

“We’re doing very well in Douglas County, and I don’t see the need to initiate any more restrictive measures at this time,” he said. “We can’t be less restrictive than the governor. The governor’s order is in place, and at this point I feel that her order is on target.”

Is Marcellino in communication with health officers in other counties?

Marcellino said he was in an email chain with the other health officers in the state and that they had a weekly meeting on Zoom to discuss different guidelines and situations.

But ultimately, each county has its “own individual challenges,” Marcellino said. “What works for one county may not work in our county.”

In general, Marcellino said the practices of social distancing, mask usage, contact tracing and the isolation of infected individuals were the “cornerstone of curtailing this virus.”

The Journal-World has made this coverage of COVID-19 available for free, outside of the paywall on LJWorld.com.