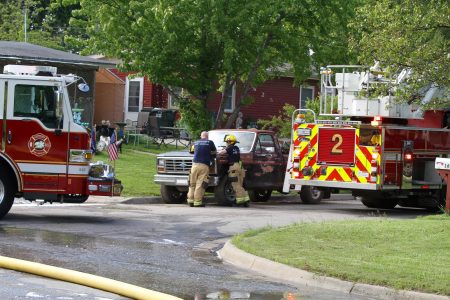 A fire on Saturday afternoon displaced a woman from her eastern Lawrence home.

Lawrence-Douglas County Fire Medical Battalion Chief Brandon Holloman said firefighters were called about 4 p.m. to a fire at 1629 Powers St. Firefighters arrived about five minutes later at the single-story home to find flames in the southwest corner of the house. The resident of the home, the only person who was there at the time of the fire, had already evacuated the house, Holloman said.

Firefighters were able to quickly extinguish the fire, Holloman said. They then started a search of the house, rescuing a dog in the process.

Although the fire was quickly contained, there was significant smoke and water damage to the house, Holloman said. He said an estimate of the damages wouldn’t be available until after the fire was investigated.

Jennifer Cool, of Lawrence, said her mother, Juanita Martin, owned and lived in the house with four dogs, none of which were harmed in the fire.

Cool said her mother heard a “pop” shortly before a neighbor told her there was smoke escaping from the house.

Holloman said the cause of the fire remains under investigation. He said Martin and the 22 firefighters who responded to the fire were all unharmed. The American Red Cross is working with Martin to find lodging for her, he said.