A marquee at Liberty Hall displays a coronavirus-related message on Saturday, May 2, 2020.

The artists’ names and concert dates have disappeared from the marquees of Lawrence’s iconic venues, replaced instead with messages related to the coronavirus pandemic.

Though local shows could be able to return sooner, many national tours are postponing shows until next year, and some in the industry are worried that without help, some venues may not be there to welcome them back.

While the shows may have stopped, the venues’ financial obligations haven’t. They still have to pay taxes and make rent or mortgage payments on their buildings even though there is no revenue coming in, and Mike Logan, co-owner of The Granada and The Bottleneck, said that without more government aid, many independent venues might not survive.

“The fixed expenses attached to a building like Liberty Hall or the Granada — the tax, insurance, rent,” Logan said. “It is a mountain of sums from day one.”

That’s why Logan’s two venues and Liberty Hall, another Lawrence fixture, are asking that Congress provide relief specifically for independent venues. They’re part of a newly formed coalition of more than 1,000 independent music venues, the National Independent Venue Association, that’s requesting a series of targeted measures to save these local institutions.

And it’s key that these venues keep operating, Logan said, not only because they help to find and develop new artists, but also because they bring in a steady stream of concertgoers to their cities.

“Being independently owned, kind of landmark venues, our job is to find talent and book and market and promote and really bring bodies to downtown Lawrence,” he said. 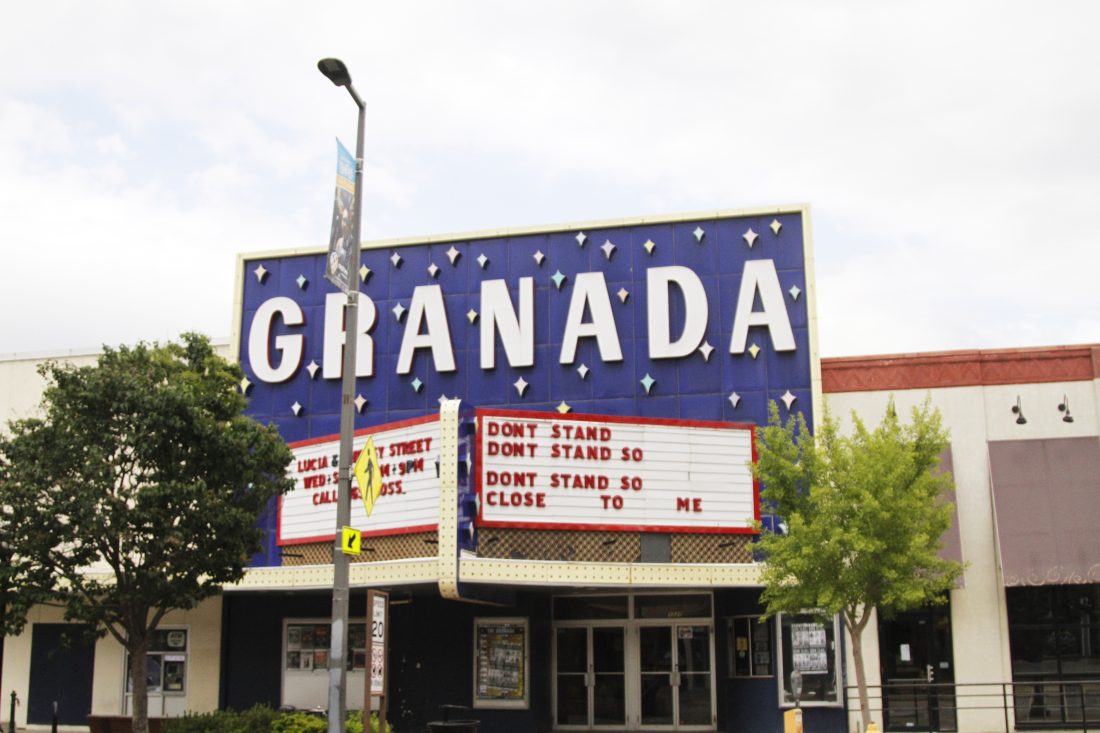 A marquee at The Granada displays a coronavirus-related message on Saturday, May 2, 2020.

Unlike with other businesses in Lawrence, the timeline until a potential return to normalcy for concert venues is one of months instead of weeks. Given the unknowns about when people will be able to safely gather in large numbers again, some of Lawrence’s oldest independent music venues say that without more government aid, their survival is in question.

Liberty Hall general manager Dean Edington said it doesn’t mean much that Kansas venues could potentially be able to hold concerts in June under Gov. Laura Kelly’s phased reopening plan. That’s because of the interconnected nature of the industry, he said. Whether a nationally touring act can come to Lawrence doesn’t just depend on local and state public health orders. It’s also dependent on other cities — Chicago, Denver, New York, Los Angeles — being free of restrictions. For that reason, Edington said many in the industry don’t expect things to return to normal until next year.

“The concert business is not going to reopen along any local or state guidelines,” Edington said. “It’s going to be a national reopening, when the entirety of the country is in the clear. And most people really don’t expect that to be until next year. So much goes into planning a tour that nobody really wants to take a chance.”

Logan agreed that many artists don’t want to take the risk of having a show in 2020. He said the next show on his calendar that hasn’t already been canceled, at least at this point, is in August.

And while some smaller shows might be able to open sooner, Jacki Becker, a local concert promoter with Eleven Productions, said shows by big-name artists are typically booked about nine months in advance. She said bands have canceled tours for months into the future, and some are delaying any touring plans until 2021.

Becker, who said she’s been involved with concerts for The Bottleneck, The Granada and Liberty Hall for more than 25 years, said an important part of Lawrence’s culture and community is at risk.

“The Bottleneck, The Granada and Liberty Hall are legacy, worldwide-known venues,” Becker said. “These are venues that have been in our community and are staples of the community.” 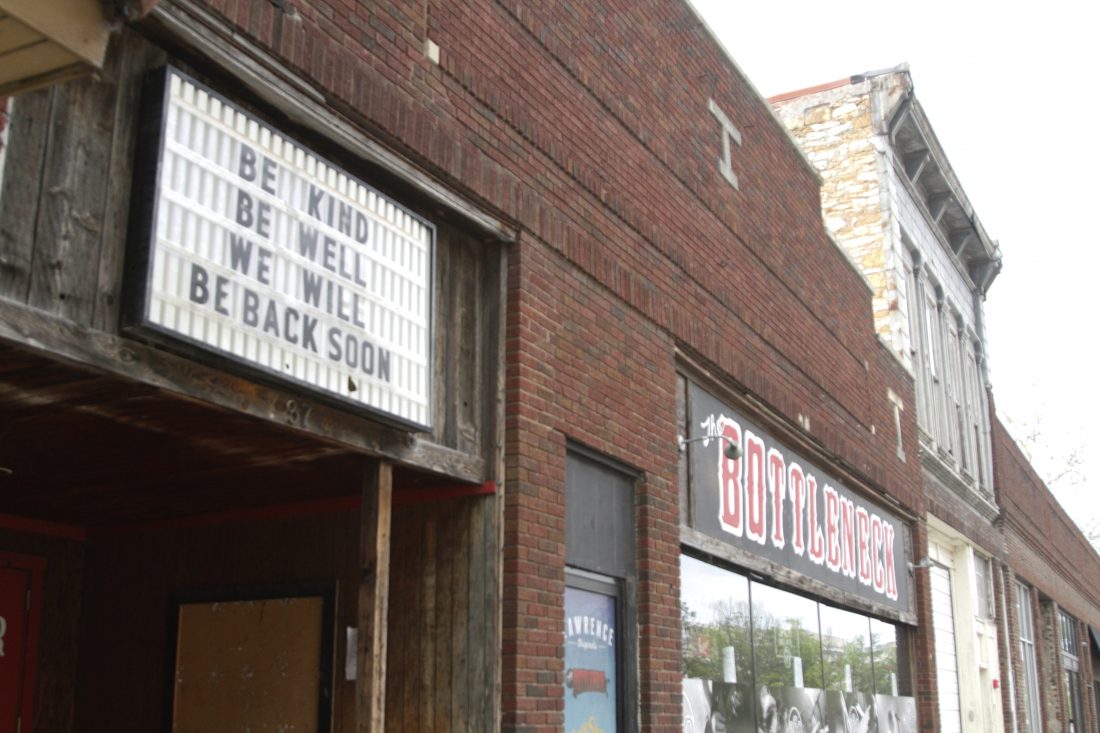 A marquee at The Bottleneck displays a coronavirus-related message on Saturday, May 2, 2020.

If the trouble facing venues is a nationwide problem, it follows for Logan and other independent venue owners that it needs a nationwide solution.

“Locally we’ve banded together, but certainly we’re part of a much larger conversation nationally,” Logan said.

That’s why Logan and the hundreds of other members of the National Independent Venue Association are turning to the federal government.

NIVA is requesting more than a dozen targeted aid and regulatory measures to support independent venues. The requested measures fall under seven broad categories: ensuring existing aid programs help those in greatest need; tax relief; continued unemployment insurance; mortgage and rent forbearance; a business recovery fund; existing debt deferral; and guidelines and resources for reopening. The entirety of the request is available on the NIVA website, at nivassoc.org/news.

NIVA President Dayna Frank, in the letter to Congress, writes that concert venues were among the first businesses to close in the coronavirus pandemic and will likely be among the last to reopen.

Frank notes that venues represent an important part of their local economies and tax bases — not only do they provide jobs for their employees, they also generate revenue for other local businesses such as restaurants, hotels, and retail shops. Because of concerns for safety, she said many believe that venues will not be able to fully recover for years, perhaps not until a vaccine is readily available to the public, and that current relief programs that provide relatively short-term assistance are not adequate.

“In our present situation, in order to ensure public health, we have no opportunity to generate revenue and we have no work to offer most of our employees,” Frank said in the letter. “The current programs are designed for businesses that will potentially be able to return to normal business operations in the coming weeks and months. They fail to sustain an industry like ours.”

State unemployment statistics indeed indicate the impact has been broad in the arts and entertainment industry. Data from the Kansas Department of Labor showed that as of late April, the industry had the highest unemployment rate in the state, as the Journal-World previously reported. The unemployment data, which was likely an undercount because of issues and delays with the filing process, indicated that about 35% of all workers in the industry had filed for unemployment.

The Granada, The Bottleneck and Liberty Hall have started selling merchandise online, which is currently the only revenue for the first two venues. For Liberty Hall, whose building also includes La Prima Tazza coffee shop, a movie theater and a video rental shop, Edington said other revenues will recover more quickly than the concert and event revenue. However, he said that the money generated from events represents a significant amount of revenue that is necessary for Liberty Hall’s budget and helps maintain the building itself.

Edington said NIVA’s efforts are an important undertaking, and he is hopeful that the industry will get more support for both its employees and to help ensure long-time venues such as Liberty Hall are around in the future.

“It’s such an important cultural cornerstone of the entirety of our city that going quietly into the night is not an option,” Edington said.