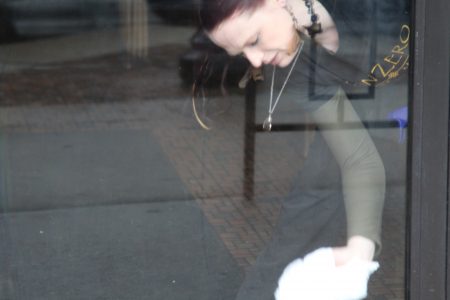 Zen Zero employee Megan Smith cleans the front door of the restaurant on Saturday, March 14, 2020, as a precautionary measure to prevent the spread of the new coronavirus.

A week ago, bartender Joey Pauda was expecting mid-March to be one of the busiest times of the year for The Burger Stand at The Casbah, with University of Kansas basketball fans flocking to watch their team play in the Big 12 and NCAA tournaments.

But all that changed in an instant on Thursday, when March Madness was called off because of the widening coronavirus pandemic.

“It’s like a really bad movie,” Pauda said Saturday as he surveyed the bar in front of him, where only two customers were seated. Instead of the basketball games that would usually be playing during March, the TV above his head was tuned to a detective show. “Usually during March Madness, we have customers lined up at the door when we get here in the morning.” 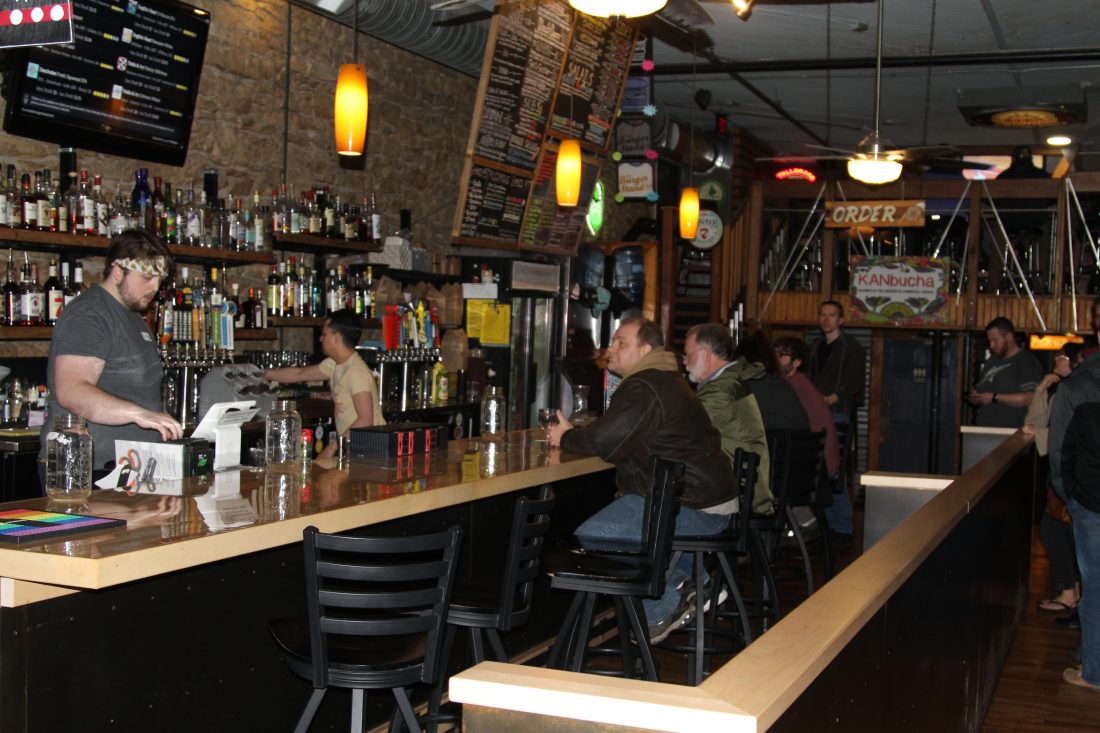 The bar and tables at the Burger Stand at the Casbah sit most empty shortly after noon Saturday, March 14, 2020.

Now, Pauda and other restaurant workers in Lawrence are concerned about a slowdown in business — both because of the many sports and entertainment events that have been canceled, and because of people taking precautions to reduce their risk of contracting the virus.

And, by extension, restaurant workers are worried about their own pocketbooks.

Pauda said he thought customers were likely to shy away in coming weeks or months as they follow expert advice to practice social distancing and avoid large gatherings. As a result, he said he expects to make much less in tips than the $300 he usually gets from his two nights a week at the bar.

Just down the street, server Megan Smith was cleaning the front door to Zen Zero, 811 Massachusetts St. Like many other bars and restaurants in town, Zen Zero stepped up its cleaning and sanitizing measures in the last week as awareness of the pandemic erupted in the public consciousness.

Smith said in addition to her regular duties as a server, she now sanitizes high-traffic areas like the front entrance on a regular schedule and takes extra care to clean and sanitize tables. She also frequently washes and sanitizes her hands as a personal defense against the virus.

Smith said she fears Zen Zero’s slowdown could continue through at least the end of the month. That will cost her tips, which is especially bad news for Smith, because her other job has been hit even harder by the pandemic:

“I also work at Liberty Hall,” she said. “All concerts and events have been postponed through the end of the month.”

Across town at Johnny’s Tavern West, 721 Wakarusa Drive, it was a slow Saturday. The stools lining the bar were devoid of customers, and few people were sitting at the tables below the large-screen TVs, which were mostly showing past basketball games. Manager Justine Johns said it was a sharp contrast to the usual March crowds. She said the restaurant actually took reservations during KU’s 2018 Final Four appearance.

It was too early to know what the pandemic and March Madness cancellation would mean for revenue, Johns said, but she estimated it might cut the restaurant’s earnings in half. What she did know was that her staff would be hurt by the loss of tips, and some of them wouldn’t get the opportunity to work extra hours that they normally get during tournament season.

“We always schedule extra staff on tournament game days,” she said. “I’ve already told them that’s not happening this year.”

But not all bars and restaurants were struggling. Saturday at Ladybird Diner, 721 Massachusetts St., the situation appeared to be business as usual, with closely packed customers waiting for tables just inside the front entrance — a stark contrast from health experts’ advice to stand at least 6 feet away from other people.

“Spring break is always a good week for us,” said owner Meg Heriford. “We had a good week, but I don’t think we had the spike we usually have during spring break. We haven’t taken a revenue hit yet, but it’s coming.”

Heriford was concerned about health issues stemming from the packs of customers waiting for seating and the closely spaced tables at her diner. In an effort to minimize transmission of the virus, she started taking precautions on Monday, when she bought ingredients to make her own hand sanitizer for the diner because there was none left on store shelves. On Wednesday, she and the staff started implementing new cleaning and sanitizing protocols. Like many other restaurants are now doing, Ladybird Diner was no longer offering condiments in a container that can be passed around at the bar or table, but rather in individually sealed packages. Staff also made sure all tables were thoroughly cleaned and sanitized before seating customers.

“Most people understand, but we have had a few get upset,” she said.

After speaking with the Journal-World and shortly after press time late Saturday night, Heriford announced that the diner would be closing for two weeks.

In a post on the diner’s social media channels, Heriford wrote that the decision was made “with the safety of staff and guests in mind, centering the protection of our immuno-compromised friends and neighbors, of our more at risk loved ones, and with the hope that every choice we make right now can mitigate a surge on our local health care providers.”

“It doesn’t feel safe or good to see so many people we love all gathered in the same space while wondering if we could be exacerbating a health crisis,” Heriford wrote. “This temporary closure is an agonizing act of love.”

The restaurant had planned, starting Monday, to offer free sack lunches to help people affected by the response to the outbreak, and Heriford said that will still be the plan with the restaurant closed to service. People are invited to come to the diner from 11 a.m. to noon, Monday through Friday, to pick up a prepared sack lunch for those staying close to home or children who can’t get a healthy meal because schools are closed, she said.

Editor’s note: This story was updated early Sunday morning, after press time, to reflect that Ladybird Diner had decided to close for 2 weeks.

LMH Health is changing its hospital and clinic billing systems to bring greater ease to patients and their families ...