Louise Erdrich said in her latest novel, “The Night Watchman,” that she wanted to show how a group of people can come together to create change. She did this through the story of her grandfather and his fight against Native American termination laws in the 1950s.

“They came together, they went to Washington, and they fixed something,” Erdrich said Wednesday night in Lawrence. “And they did it because they were unified.”

“An Evening with Louise Erdrich” ended as it began — with a standing ovation. At the close of her talk, Erdrich read the last two sentences of her newest release:

“The Night Watchman” is set in the Turtle Mountain Indian Reservation in North Dakota and is based on the life of Erdrich’s grandfather, Patrick Gourneau, who is portrayed through the character of Thomas Wazhashk, a Chippewa council member who fights Congress’ attempt to terminate Indian treaties under the ruse of “emancipation.”

“Termination came like a whirlwind on people,” Erdrich told the audience. “It happened so fast. In July of (1953) this bill was signed, and it meant what it said: ‘termination.’ All of the treaties with Native American people were terminated.”

Wazhashk is one of two central characters, because, as Erdrich noted, “It’s hard to write about a decent person for a whole book.” The other protagonist is Patrice, known as Pixie, whom Erdrich describes as having “romantic torments.”

Erdrich read portions of her novel at the event, thumbing through her copy, which was riddled with pink and green sticky notes. She read a scene where Pixie sees her romantic interest in a new light, a section with an intense boxing fight and even a part with a psychic dog.

“An Evening with Louise Erdrich” was put on by Haskell Indian Nations University, the Lawrence Public Library and the Raven Book Store.

Haskell converted its auditorium stage into a living room for the event. A tan couch sat center stage with a throw pillow and blanket. An area rug covered a portion of the floor, with a bookshelf holding texts by Erdrich and other Native American authors in the background.

Erdrich, who wore a Haskell T-shirt during her talk, said she had mentioned — “wouldn’t it be nice to have a living room?” — but did not expect it to happen.

She called it “moving” to be speaking in front of the warm crowd at Haskell, saying it was her first time at the university. She mentioned that her great aunt was a valedictorian there.

“I’m wearing this shirt with a lot of pride,” she said.

In a question and answer session after her talk, an audience member asked Erdrich if she had any advice for student writers. She responded yes without a moment’s hesitation.

“Think about what it is in your life that you laugh at, that you honor, that you love, that you cherish and that you want to bring to justice,” she said. “Just go for the big stuff. Go for the big questions of honor and reliability and love. And don’t let up.”

In response to another question about the difficulties Erdrich had to face as a Native American writer, Erdrich said she had to overcome “the idea that a book of intellectual complexity could be written about Native American people.

“And also there was almost a rule that if one book about native people had been published in the last 10 years, that was enough,” she added.

Michelle Sturges-Brown, a teacher of Native American literature at Haskell, introduced Erdrich, saying the author’s stories are a “delight” to teach.

“In the past, when I’ve told students about speakers that we have coming, they’d look at me and say, ‘Louise Erdrich?’ And I would laugh and tell them, ‘I wish.’ But what I should have said was, ‘Just wait,'” she said. 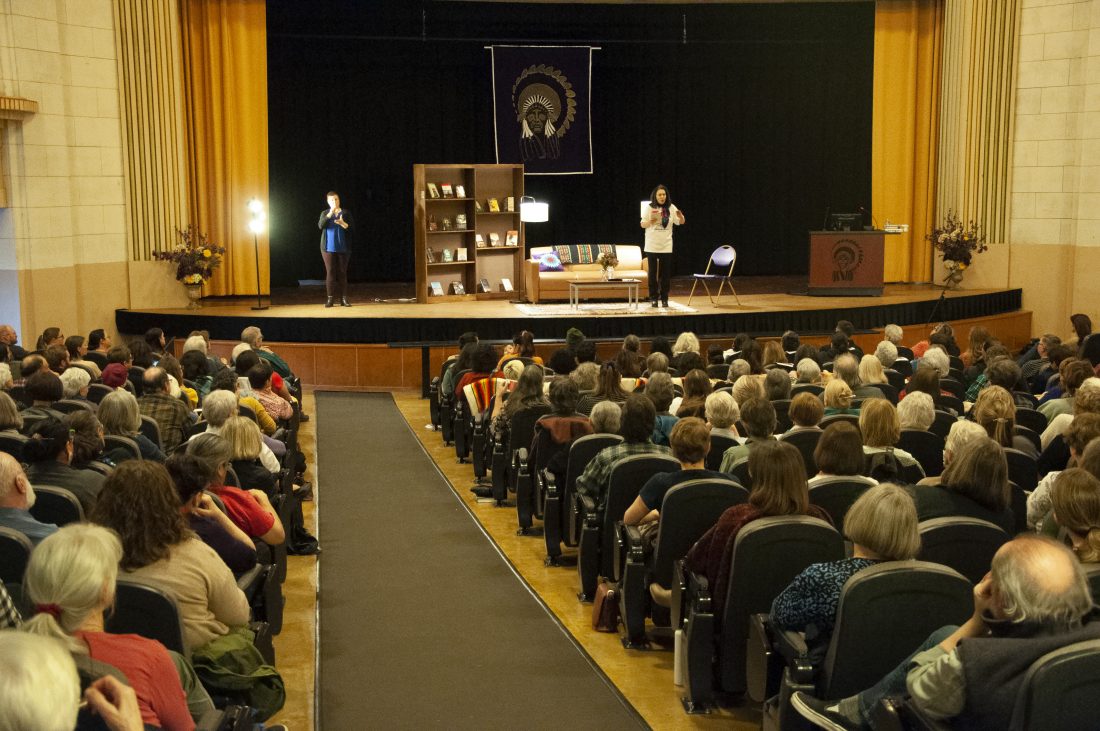