photo by: Courtesy of Roger Shimomura

A new exhibit at the Spencer Museum of Art combines the paintings of local artist Roger Shimomura with videos of his performance art, all digitally remastered and cut for the exhibit.

While the Lawrence-based artist describes himself as a painter, he also created staged performance pieces from 1984 to 2002. Exhibit curator Kris Ercums believes this is the first time there has been a comprehensive exhibit staged about Shimomura’s performance art. 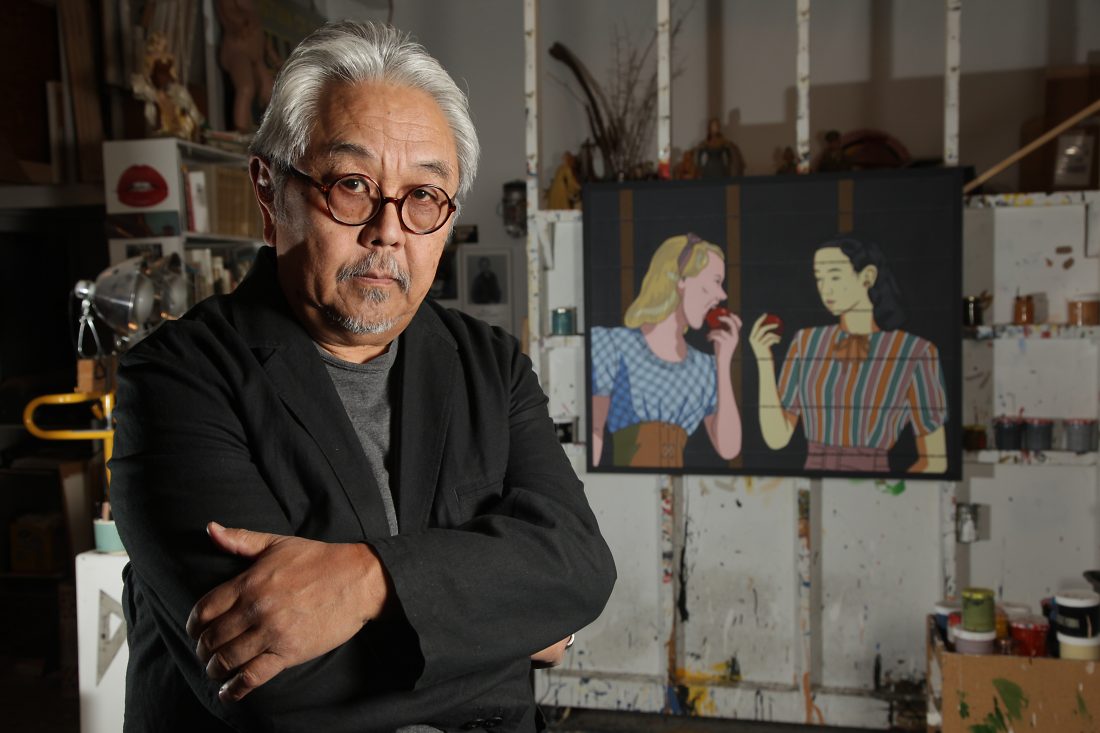 Retired University of Kansas professor and artist Roger Shimomura is pictured in this file photo from November 2011 with one of his paintings, “Classmates,” which touches on his experience living as a Japanese Americans in an internment camp during World War II.

The exhibit contains paintings and projected films that loop clips from Shimomura’s performances. In “Junko’s Song,” part of Shimomura’s “Trans-Siberian Excerpts,” a woman in a plaid dress and mask with large blue eyes lip syncs to a Japanese pop song. It’s meant to interrogate Japanese “kawaii,” or cute, culture and notions of beauty. In a scene from “The Seven Kabuki Plays Project,” which tells the story of Shimomura’s grandmother, Toku Machida Shimomura, a woman portraying Shimomura’s grandmother listens to the radio as President Franklin D. Roosevelt delivers his “date which will live in infamy” speech following the attack on Pearl Harbor. 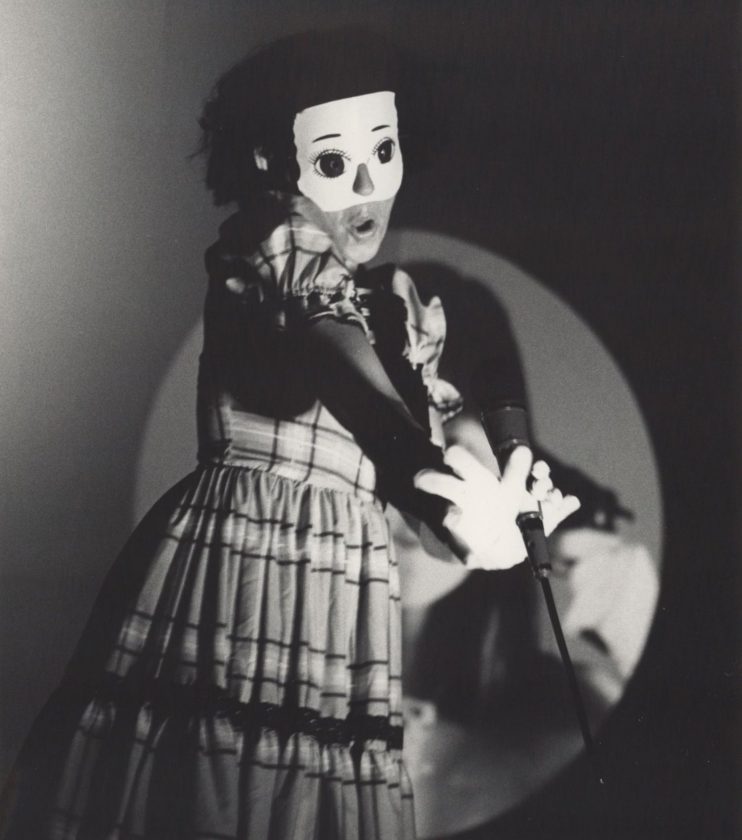 photo by: Courtesy of Roger Shimomura

Ercums said that there was an unexpected opening in the museum’s exhibition calendar for the spring and that he jumped at the opportunity to showcase Shimomura’s performances, despite the task’s difficulty.

“You can only present the residue of it,” Ercums said. The exhibition showcases props, storybooks and programs from the performances. But Ercums noted that a performance is really about the live experience.

“(Performances) don’t have the same kind of life longevity as a material piece of art,” he said. “They are much more ephemeral. Part of the beauty of them is you have to experience them. We can only evoke that experience through these.”

Despite this, Ercums believes presenting Shimomura’s two-dimensional paintings alongside videos of his three-dimensional performances allows visitors to see the connections between his art forms. 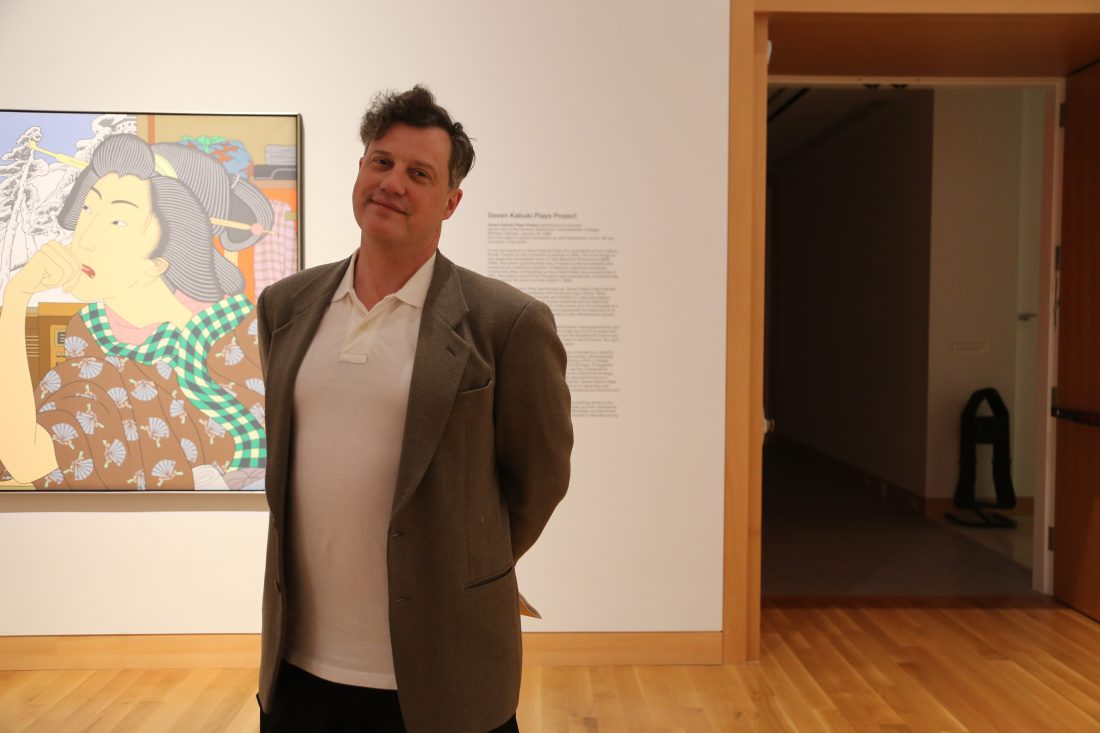 Spencer Museum of Art curator Kris Ercums put together the museum’s current exhibit, “Staging Shimomura,” which will run through June 21.

Ercums’ favorite room of the exhibit is a recreation of an art installation Shimomura made in 1996 and meant to evoke an internment camp.

Four TVs are mounted on each wall of the room and project changing seasons behind a barbed wire fence. A picnic table in the middle of the room includes a vase filled with sand and sagebrush from southern Idaho, near the site of the former internment camp. The walls are made of tar paper and a constant wind sound plays in the room.

“I think that was kind of a constant sound, especially in the makeshift structures that they were given,” Ercums said. “It was constantly cold.”

“Staging Shimomura” is free and open through June 21. The Spencer Museum is hosting programming alongside the exhibit. The next program is a lecture at 5:30 p.m. on March 24 with associate professor Hiroko Ikegami from Kobe University, in Japan. If Ikegami is unable to attend in person, she may Skype into the event, Ercums said. A full lineup of programming is available on the museum’s website, spencerart.ku.edu.