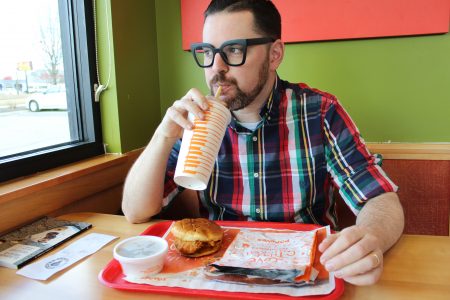 Danny Caine's new book of chain restaurant poetry, "El Dorado Freddy's," comes out March 3. Caine, owner of The Raven Book Store, is pictured on Feb. 26 at the Popeyes on Iowa Street, where the idea for his first poem was born.

Danny Caine was eating a five-piece spicy chicken tender meal at the Popeyes on Iowa Street when genius struck.

It was February of 2018 and Caine, owner of The Raven Book Store in downtown Lawrence, was alone in a corner booth with his combo meal, a good book and the setting sun.

“As I was just being overcome by the end of this book and by the chicken tenders, you know, it’s like a poem happened,” he said. “I was like, ‘This is a really interesting scene,’ and it got me thinking about why people go to chain restaurants.”

Last week, Caine returned to that corner booth at Popeyes to speak to the Journal-World about his newest book, “El Dorado Freddy’s: Chain Restaurants in Poems & Photographs.” 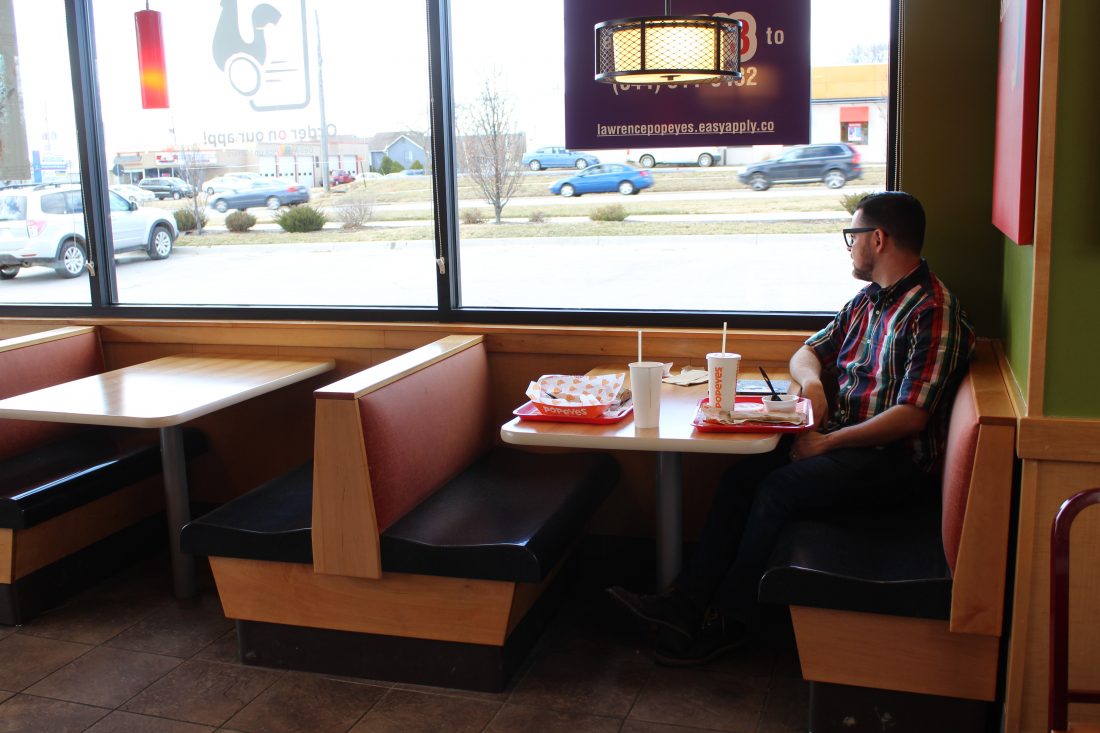 Danny Caine’s new book of chain restaurant poetry, “El Dorado Freddy’s,” comes out March 3. Caine, owner of The Raven Book Store, is pictured on Feb. 26 at the Popeyes on Iowa Street, where the idea for his first poem was born.

It was that original Popeyes experience — “weird and poignant enough to write a poem about,” Caine writes in the prologue — that kick-started the collection of poems and photography, which comes out Tuesday. Caine co-created the book with photographer Tara Wray, whose images complement Caine’s 33 poems.

“I can’t control when I get ideas for poems. They happen suddenly,” Caine said. “That’s one of the reasons I love poetry. You can be ambushed by a poem at any moment.”

His poems were written over the course of about a year, from the time of wife Kara’s pregnancy to about 4 months into the life of their son, Jack. Many were edited in the middle of the night, Caine said, one hand holding and attempting to soothe Jack to sleep, the other typing in the notes app on his phone.

Caine did not go to chain restaurants for the purpose of writing about them afterward. He let his trips occur naturally, interested in observing why people (and especially himself, a small-business advocate) go.

Sometimes it’s to satisfy a craving: “Tonight we have to / have custard and Kara has to have the baby / stop kicking her bladder for like ten minutes at least / and Culver’s has to stop putting calorie counts / on their menu.”

Sometimes it’s the only place all one’s friends can gather at once for the big announcement: “How about drinks: Kara / asks for water and I think Kate notices. The margaritas / take too long to get here and I’m dying, can’t think / of anything to say. Anything else to say.”

Other times, it’s to save time: “I’m ashamed to even say this: / I downloaded an app / so we could get a spot in line / before we even got here.”

Each poem includes a note at the bottom of the page with the address of the chain, what Caine ate and how much it cost, who he was with and why he went. Caine also reviews the chain in some way. Some are “greasy good,” others “never as good as you remember.”

Caine said he spent the most time working on “Waffle House,” a more somber poem in which he questions the type of world into which he is bringing his son. The poem deals with death and gun laws, in addition to waffles and hash browns.

The poetry collection is split into two sections by Wray’s photographs, which capture the varied visual aspects of chains. She depicts, among other scenes, a broken drive-thru sign in Manhattan, smiling Ronald McDonald wall art in Wichita and doughnuts strewn about a parking lot in Merriam.

“A place like this is designed to be a sensory experience not just for your smell and for your taste but for your eyes. It’s such an interesting visual landscape,” Caine said, noting that Wray aptly balances the mixed emotions of chain restaurants with a sense of humor.

Wray suggested “El Dorado Freddy’s” as the title of the book, pulling the line from Caine’s poem about the Wichita-based chain. Caine said it was a fitting title for a “Kansas project.”

The release party for “El Dorado Freddy’s” is at 7 p.m. Tuesday at the Lawrence Public Library. Caine will read some of his poems with a book sale and signing to follow. 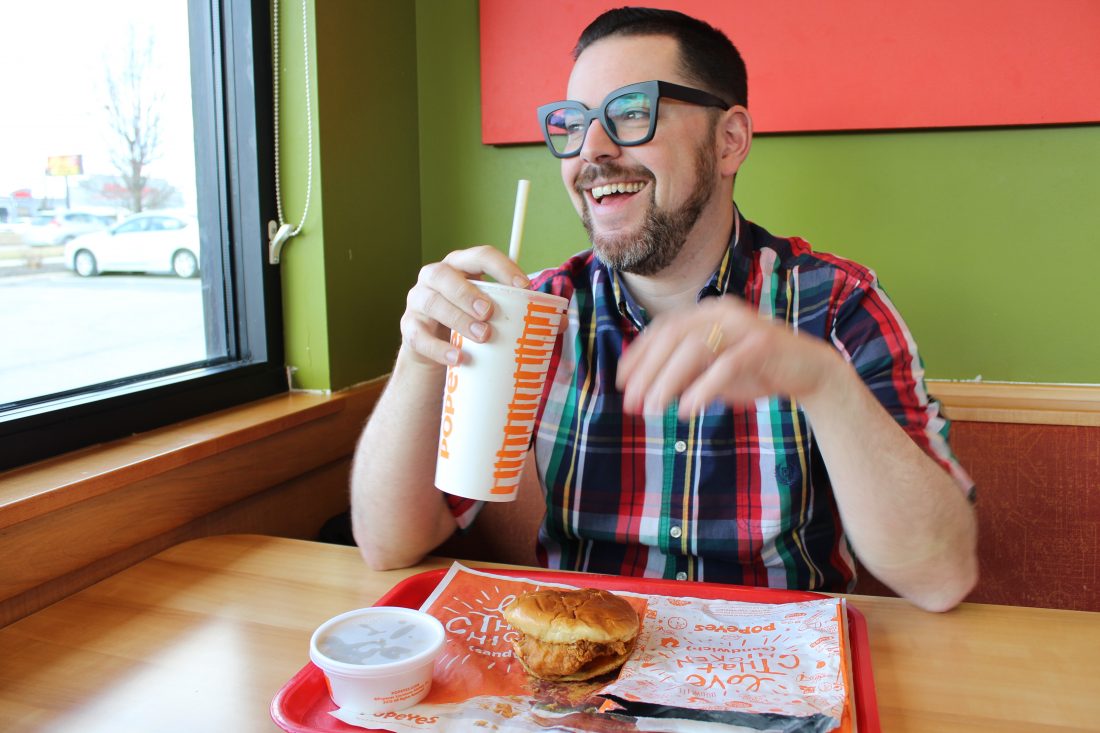 Danny Caine’s new book of chain restaurant poetry, “El Dorado Freddy’s,” comes out March 3. Caine, owner of The Raven Book Store, is pictured on Feb. 26 at the Popeyes on Iowa Street, where the idea for his first poem was born.