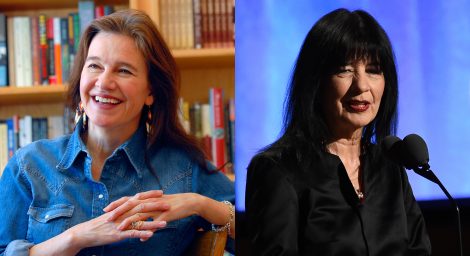 Novelist Louise Erdrich and National Poet Laureate Joy Harjo will appear in separate events this calendar year, one in March and the other in the fall.

“An Evening with Louise Erdrich” will take place March 11 in the Haskell Auditorium from 7 to 8:30 p.m. This event is co-sponsored by the Raven Book Store and Lawrence Public Library.

Erdrich will discuss her latest novel, “The Night Watchman,” which is based on the life of Erdrich’s grandfather, who worked as a night watchman at a factory and carried the fight against Native dispossession from North Dakota to Washington, D.C.

Erdrich is the author of 15 novels, one of which, “The Round House,” won the National Book Award for Fiction. That novel is this year’s Read Across Lawrence adult book. Read Across Lawrence is a library program that encourages members of the community to read the same book and explore its themes through public discussions and interactive programming. A thousand free copies of “The Round House” will be distributed during the book giveaway on March 28.

Wildcat said Erdrich was “one of the leading talents we have among indigenous women writers in North America and one of the most prolific.”

She is a member of the Turtle Mountain Band of Chippewa Indians.

Wildcat said what distinguishes Erdrich’s writing is how well she knows her people and that her novels are adept at connecting life on the reservation with urban life.

Her lecture will be free and open to the public. Wildcat said the capacity of Haskell Auditorium, located on East Indian Avenue, would be about 400 people for this event.

National Poet Laureate Joy Harjo will be speaking at Haskell in the fall. Wildcat did not provide a specific date for the event.

Harjo, a member of the Muscogee (Creek) Nation, is the 23rd poet laureate of the United States and the first Native American poet laureate. She is the author of nine books of poetry.

Her work incorporates indigenous myths, symbols and values, and her themes include social justice, feminism, remembrance and transcendence.

Wildcat said Harjo’s appearance would be a “real big deal for our campus.”

He expects that by the time of the event the auditorium will be able to hold 550 people. (Haskell is currently renovating the balcony seating section in its auditorium.) This will be a ticketed event. More information related to the event will be released in the future, Wildcat said.