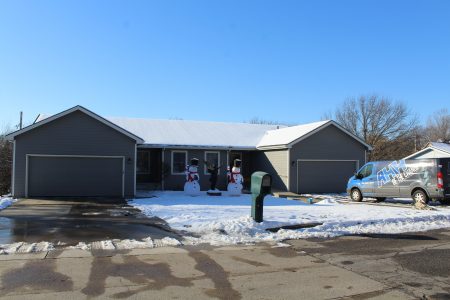 After his mother died in a car accident in 2010, Ehren Schwarz said he began to slip into a spiral of addiction that eventually led to homelessness.

Instead of taking advantage of a scholarship to attend and play football at Washburn University in Topeka, Schwarz said he gave into the addiction and intermittently lived on the streets of Kansas City, Mo., for about five years.

But Schwarz, who is originally from Nebraska and is now 25, eventually entered into a respite housing program offered by Artists Helping the Homeless, a charity organization in the Kansas City area, that helped him get back on his feet.

Now he works to pay it forward, serving as a house manager for a respite housing project known as the Kairos House — also operated by Artists Helping the Homeless — that recently opened in Lawrence. The house, which is located at 1209 Randall Road, aims to help local men suffering from homelessness, mental illness and addiction.

“That’s what keeps me driving while I’m working here; the opportunity to give away what I’ve been given,” Schwarz said.

Oftentimes, people are homeless because they need care for behavioral health issues but don’t have the support to address them, said Kar Woo, president of AHH. The organization focuses on filling the gaps that social services have not been able to provide.

The first service the organization provided in Kansas City was transportation for homeless people to get to work, school or important appointments. Eventually the organization expanded to the point that it could own and operate respite housing that allows residents to live free of charge under the home’s care and surveillance. It also offers wraparound services — such as medical, dental and mental health care — to get people back on their feet.

Woo said his organization’s version of respite housing is important because other transitional housing options often cost money that homeless people do not have. Some housing options also require the residents to pay their rental fees within two weeks of moving in, which Woo believes is too short of a time for those residents to find adequate jobs.

“What job can you get that you have to have cash in two weeks?” Woo said, noting many jobs have hiring processes that take between four to eight weeks. “Now they aren’t looking for a job that is fulfilling. It becomes a survival program rather than a thriving program.”

AHH’s housing projects, including the Lawrence location that began operating in September, aims to give residents more time to regroup and find opportunities to thrive by offering free housing.

“We allow them to grow,” he said. “As a community, do we want everybody to work cash jobs? Or do we want them to do a little better?”

The Lawrence respite home, which serves the Douglas County community, is aptly named for that goal. It is a reference to the ancient Greek word Kairos, which means the right, critical or opportune moment.

Woo said by providing more time for the residents to sort out their situations, it allows them to gradually assimilate back into society and makes sure their motivation to succeed is not wasted by forcing them to survive rather than thrive.

“That’s the philosophy,” Woo said. “We’re trying to give people the chance to really excel.”

Although the county is currently constructing two new transitional housing options on the Treatment and Recovery Campus of Douglas County, Jolicoeur said there was an immediate need for people with mental health or substance abuse issues. She said that homeless population is often not a good fit for the Lawrence Community Shelter. They often end up cycling in and out of the Douglas County Jail.

But working with AHH, the county hopes to begin filling that gap and helping keep people with behavioral health issues from repeatedly ending up in jail, which is a major issue for Douglas County’s overcrowded facility, she said.

“If you house them, could you interrupt that cycle?” Jolicoeur said. “That’s what Kar Woo has proven to do with his model in Kansas City.”

The county is set to provide about $370,000 of funding in 2020 for food, medication and transportation for the residents and the general operation of the house, according to a memorandum of understanding between the county and AHH.

The Kairos House in Lawrence currently provides housing for up to eight residents at a time. Woo said he is not sure if the program will expand to offer services to more people at a time. He and Jolicoeur both said they wanted to start out slowly and make sure it is successful.

Although eight people at a time may seem like a small number of people, Woo said it’s important to make sure the program works within its means.

“I cannot save the world and I cannot help everybody but I think I can help (an) individual,” Woo said. “If I help each individual the best I know how, they can pass it on to the next person.”

Schwarz and other residents appear to be the individuals who have taken that philosophy to heart. Like Schwarz, many of the people who operate the services provided by AHH were at one point receiving its care. Woo said it’s important to have people who understand what the residents are struggling with and can provide peer support to help them through it.

“People in leadership positions need to be a beacon for those who are striving to get better,” Schwarz said. “They need to see something that shows if this thing really works.”

Although Schwarz is focused on helping others, working at the Kairos House is also helping him personally. He said he was able to reconnect with his family, which now resides in Silver Lake, a small community northwest of Topeka. Moving to the Lawrence area allows him to be even closer to them, he said.

Schwarz is also pursuing a degree in secondary education. He’s been in school for two years straight and will transfer to the University of Kansas next semester, he said.

“It’s one of those situations where the door was just being opened in front of me and it was just a matter of me stepping into it,” he said. 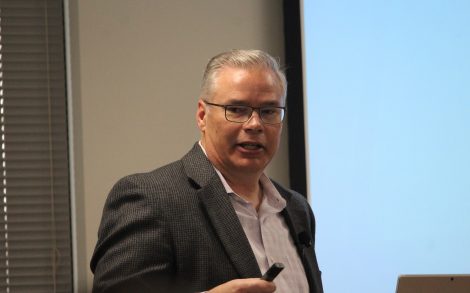