New office space with a copper exterior and new folding bay doors are seen on the southwest corner of the renovated Lawrence Douglas-County Fire Station No. 1, 746 Kentucky St., Monday, Dec. 23, 2019.

The public is invited to see the newly renovated Fire Station No. 1 and watch firefighters demonstrate “turning out” for a call this Saturday at an open house.

The entire station will be open, allowing visitors to see all aspects of the $7.14 million renovation, including two additional fire poles, new garage doors, a new office area, a training room and individual sleeping quarters. 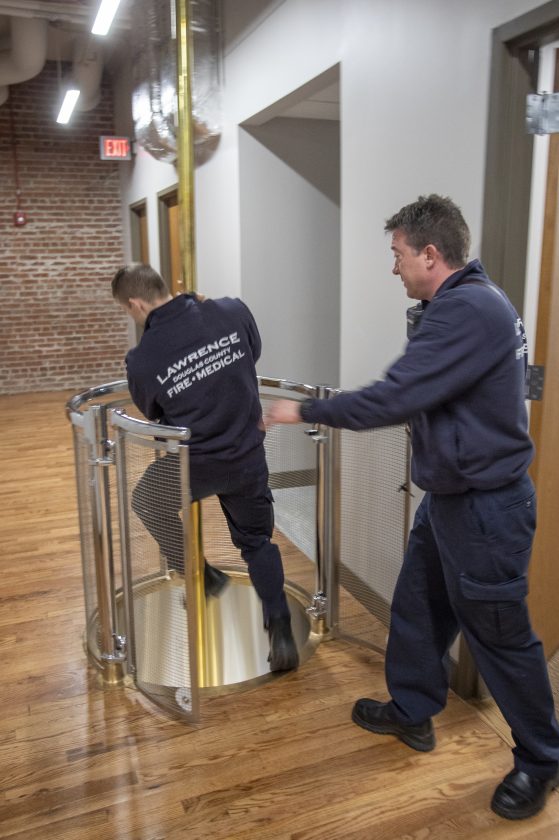 “It was a lengthy renovation project, and we want the community to see the result of their project,” Division Chief of Administration Tom Fagan wrote in an email.

Fagan said children might enjoy learning about the newest fire engine and watching firefighters demonstrate how they go down the fire poles to get to the trucks quickly. He also said the event will be a good opportunity to educate the public on ways to reduce risk in their own homes, such as having functional smoke alarms. 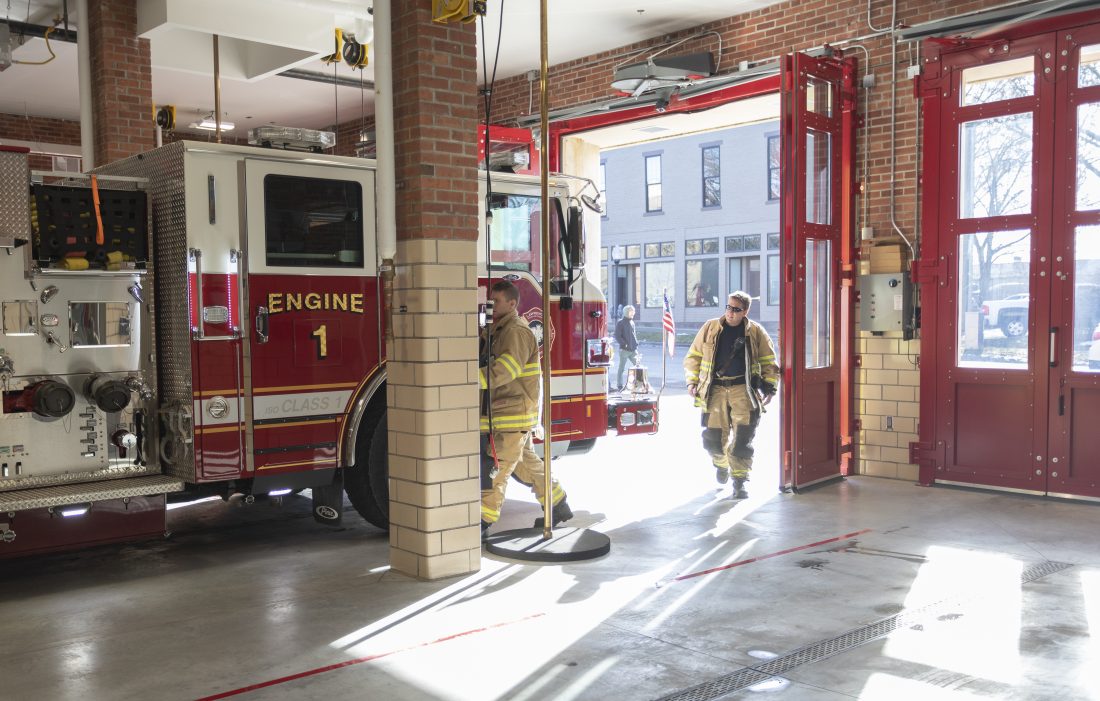 After returning from a call, Lawrence Douglas-County Fire Medical personnel park Engine 1 in renovated station bays at Fire Station No. 1, 746 Kentucky St., Monday, Dec. 23, 2019. The bays have a new concrete floor and new bay doors that fold open rather than rise up.

The last time the department hosted open house events was in 2015, for the department’s 100th anniversary. Fagan said the department is looking forward to engaging with the community — “It allows our firefighters to meet the public in a nonemergent environment.”

In the University of Kansas’ production of Shakespeare’s “As You Like It,” opening this weekend, director Mechele Leon has adapted the play’s setting to represent fascist Europe in the 1930s. 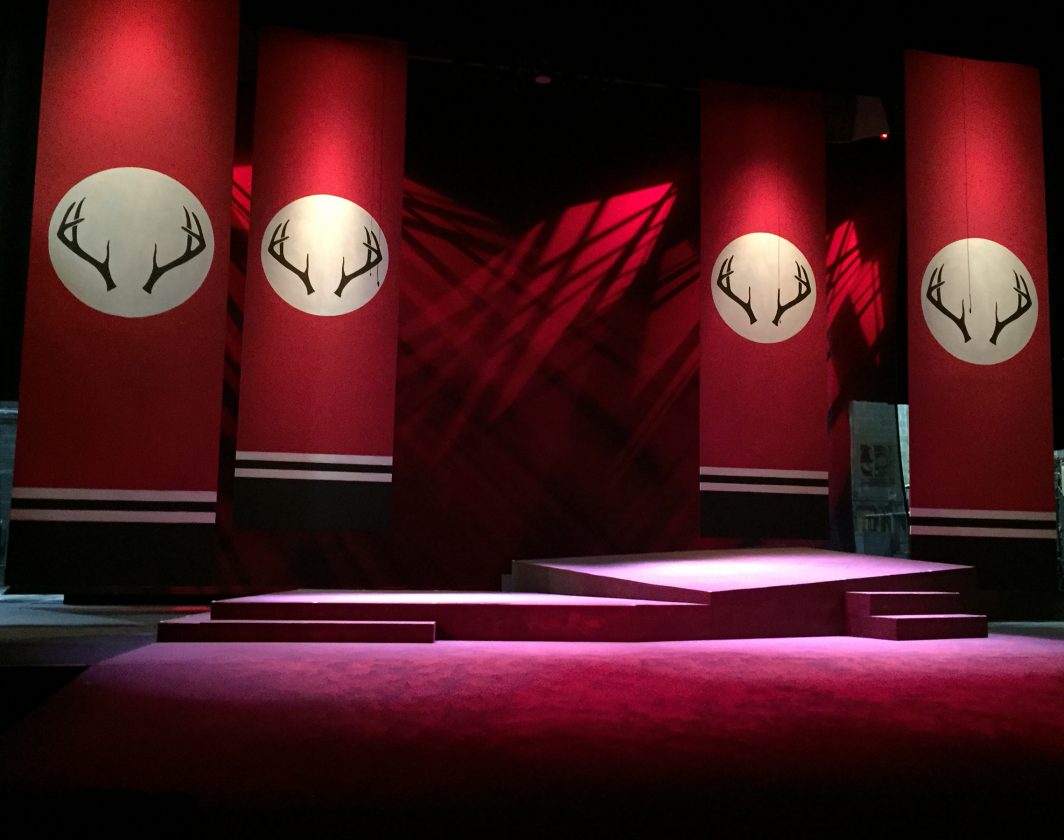 The University of Kansas’ production of Shakespeare’s “As You Like It” places the story in Europe in the 1930s. Dennis Christilles, associate professor of scenography in KU’s Department of Theatre & Dance, designed the set and lighting.

By making this change, Leon believes the audience will better understand the oppressive world Shakespeare describes. “As You Like It” is a pastoral comedy in which characters flee from a usurping and tyrannical duke to find love and freedom in a forest.

“It’s a broken world,” Leon, a professor in the Department of Theatre and Dance, said of Shakespeare’s setting. “There is some kind of evocative and relevant setting in the 1930s — something that would bring the story into a more modern era.”

Leon said her production likens the city setting to Hitler’s Nuremberg Rally, while the forest is portrayed in an impressionist style. Costumes and music also reflect the ’30s. 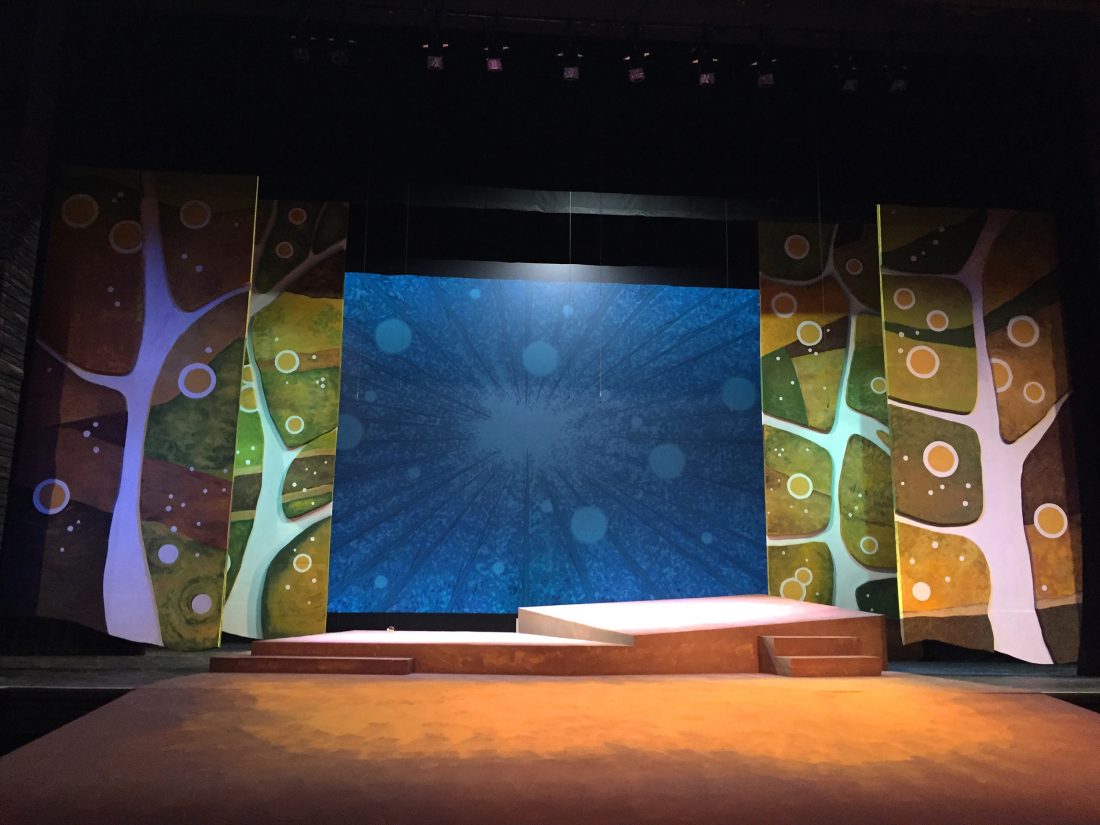 Dennis Christilles, associate professor of scenography in the University of Kansas’ Department of Theatre & Dance, designed the set and lighting for the university’s production of Shakespeare’s “As You Like It.”

Two English garden sheds built by carpentry students from the Dwayne Peaslee Technical Training Center will be the raffle prizes this weekend at the annual Lawrence Home Show.

The two-day event will have nearly 70 exhibitors who will feature services and products related to home remodeling, home decor and landscaping.

“It’s popular because it’s a convenience for people,” said Bobbie Flory, executive director of the Lawrence Home Builders Association, the organization that puts on the event. “If they’re wanting to do a project, everything is under one roof, one place.”

Flory said the show is a good opportunity for the public to learn about new home trends and technology and for exhibitors to receive customer feedback.

The drawing for the two garden sheds will be on Sunday afternoon. The sheds are hexagonal in shape, with peaked roofs and doors with windows.

These English Garden Sheds built by carpentry students at The Dwayne Peaslee Technical Training Center will be the raffle prizes at the 2020 Lawrence Home Show.