With wind chill, temperatures to feel like minus 10 Thursday morning; snow expected for much of today 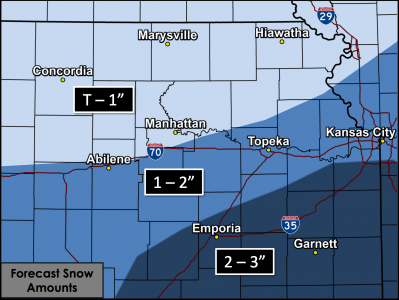 A screenshot from the National Weather Service in Topeka shows snow amounts expected on Feb. 12.

Thursday morning will be extremely cold, according to a meteorologist from the National Weather Service who says the wind chill will make the temperature feel like 10 to 15 degrees below zero.

It will likely be “the coldest air of the season we’ve seen so far,” said Kevin Skow with the National Weather Service office in Topeka.

Skow expects temperatures to rise to only the single digits by Thursday afternoon.

Lawrence is under a winter weather advisory until midnight tonight, and snow is expected to fall for much of Wednesday. Skow said that because Wednesday temperatures would be hovering right around 33 degrees, precipitation would likely remain in the form of snow but that rain could be in the mix as well.

He noted a “potential for roads to refreeze and become slick” overnight but said the office was still working to answer just how dangerous the roads may be on Thursday. That’s part of the reason the winter weather is advisory is in effect until midnight, Skow said.