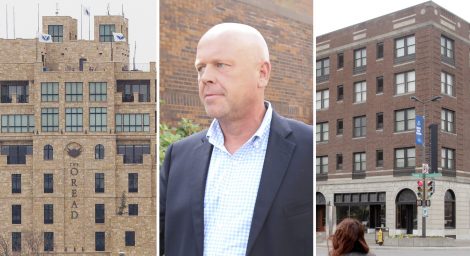 The felony convictions of Lawrence developer Thomas Fritzel may have led to consequences for at least two well-known bars in town.

The bars of the Eldridge Hotel and The Oread hotel — which are owned by Fritzel-led companies — have not been serving alcoholic beverages for several days because they currently do not have liquor licenses.

When asked about the liquor license issue at The Oread, limited partner Todd Sutherland told the Journal-World that Lawrence attorney Mark Emert is “handling that.” Nancy Longhurst, the general manager for both hotels, did not respond to a request for more information. Emert said he couldn’t immediately provide more information.

Some have speculated the bars do not have liquor licenses because Fritzel has been convicted of several felony charges. According to state statute, KSA 41-311, a convicted felon cannot be issued a liquor license.

Fritzel did not answer a call from the Journal-World on Tuesday.

In July 2019, a jury in federal court convicted Fritzel of illegally disposing of asbestos-containing material while doing remodeling work at Alvamar Country Club, which is now known as The Jayhawk Club, in 2016.

Additionally, Fritzel recently pleaded guilty to a separate federal charge of criminal conspiracy. In that case, Fritzel admitted that he and others submitted false monthly sales tax returns to the state of Kansas related to the development of The Oread hotel.

Fritzel is facing prison time for both cases.

The Eldridge and Oread hotels are both well known for their house bars and restaurants.

The Eldridge operates its Eldridge House Grille and Jayhawker Bar, which was renovated in late 2018. It also includes the All American Bar, which features higher-end drinks.

The Oread operates the Bird Dog Bar, a bar and grill on the hotel’s main floor. It also includes a rooftop bar known as The Nest on Ninth, which overlooks the University of Kansas campus and parts of Lawrence. An online listing of liquor licenses shows The Cave, a large bar located in the basement of The Oread, still has an active liquor license.