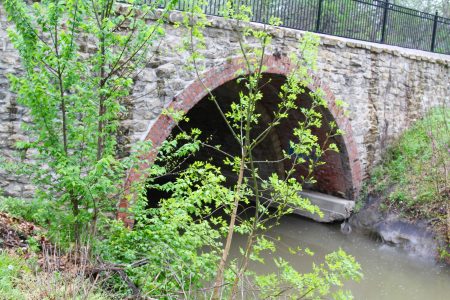 The Women's Bridge in Baldwin City, pictured on Saturday, April 25, 2020, will be one of the stops on a walking tour the city's sesquicentennial committee is planning.

With the COVID-19 pandemic ending community gatherings for the foreseeable future, organizers of Baldwin City’s sesquicentennial events say they are exploring creative ways to engage residents in the celebration.

As originally conceived, Baldwin City’s sesquicentennial celebration was going to tie into a number of regular community events held throughout the year, culminating in a special event on the 150th anniversary of the city’s official incorporation on Sept. 22, 1870.

Baldwin City Councilman Brian Cramer, the City Council’s liason to the sesquicentennial advisory committee appointed by Mayor Casey Simoneau, said it was too early to cancel the Sept. 22 event or the planned sesquicentennial Fourth of July happenings, but the city was staying flexible to ensure public safety.

“The plan is to have a celebration, but things might have to be moved back,” Cramer said. “Fortunately, anniversaries happen every year. If we have to have a ceremony on our 151st anniversary, that would be unique, too.”

“It may look a little different and the timeline might change, but we’re still very excited about the sesquicentennial celebration,” she said.

One event canceled because of the pandemic is the grand opening of Sullivan Square, the downtown park constructed this winter and spring on the open lot known as the Lotatorium in the 700 block of High Street. Cramer said the city plans to mark that opening sometime in June with the unveiling on the city’s website,baldwincity.org, of four murals produced by local artists depicting scenes of the community’s history and culture. The murals are to be painted on the back rests of park benches, he said.

With community gatherings out for the foreseeable future, the committee is looking to provide other online content in the way of presentations, photographs and articles on Baldwin City history, Cramer said. That effort will take advantage of the city’s enhanced online communications presence and be accessible through a link on the city’s website or its Facebook page.

Sesquicentennial content would include the accounts of notable Baldwin City families throughout history, as well as presentations by local history enthusiasts, such as Roger Boyd, president of the Douglas County chapter of the Santa Fe Trail Association.

Conover said the content would include photos and other material from the Baldwin City Library’s Kansas Room. It is hoped one of the first sesquicentennial items to be available online will be a presentation that had been scheduled for the library last month.

“We had to call it off when all this started to come down,” she said. “It’s ‘The Story of Baldwin City.’ We hope to have it online.”

Among the other online content the library hopes to contribute: video oral histories of Baldwin City residents and, hopefully, a sesquicentennial project from the school district’s fourth graders.

“That fourth grade project kind of got stopped in its tracks right when all this happened,” Conover said. “When the library reopens, I hope somehow to share that content, as well.”

Another activity in the early planning stages is a walking tour honoring the new downtown park’s namesake, Lucy Sweet Sullivan, who was elected mayor of Baldwin City in 1889 with an all-female city council. The tour will include a stop at the Women’s Bridge in the 1100 block of High Street that Sullivan and the new city councilwomen built upon their election so that women didn’t get their long dresses muddy crossing the creek between the train depot and downtown. Other stops will include the new Sullivan Square Park, which was the site of the home of Lucy and John Sullivan, and the old Palmyra Post Office on the Baker University campus.

Cramer said the sesquicentennial activities and material the committee provides should help residents get in touch with the city’s history while they’re staying at home.

“We’re excited about all the content we’ve collected, and the city communications have really stepped up our game,” he said. “I do think it will provide something of a diversion people can enjoy while they learn more about their community’s history.”