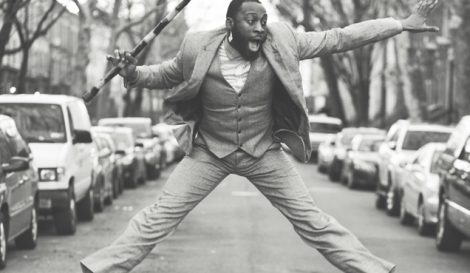 Michael Mwenso, of Mwenso & The Shakes, will perform a virtual concert with some members of his band April 7 at 7:30 p.m. on the Lied Center's Facebook page.

Some members of the band Mwenso & the Shakes are quarantined together in Harlem, and they will be performing a live concert on the Lied Center’s Facebook page Tuesday night at 7:30.

This will be the second time the Lied Center has put on a free virtual concert for viewers during the COVID-19 pandemic. Two weeks ago, it paid the Emmet Cohen Trio to perform live, and the video, still available online on its Facebook page, received over 10,000 views.

Kwan said it was important to continue to support artists monetarily during this time, as well as to provide residents with a reprieve from negative news.

“In a time of physical distancing we really feel it’s important to provide opportunities for social connection through the performing arts,” he said.

Mwenso & the Shakes combines jazz and blues expression through African and Afro American music. They performed at the Lied Loves Lawrence Festival in 2018. On the Lied Center’s event page for the performance, it includes an apt video of the group performing a song titled “Resolute.”

“We see that people are worried and feel all alone,” the group sings. “And don’t know which way to turn and which way to go.”

The concert will last about an hour and a half and will be available online at facebook.com/liedcenter.