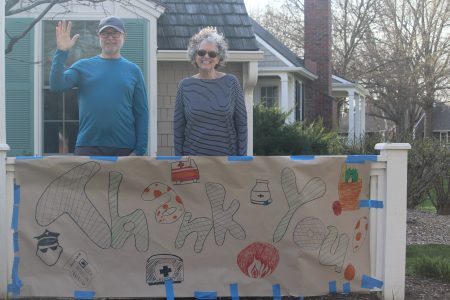 Karen Cochran, right, organized a neighborhood event in Deerfield Cottages on April 1, 2020, to thank the essential workers in the city. Her husband, Ron Guerin, left, took photos at the event and plans to send them to essential service organizations in Lawrence.

Sixty homes in the Deerfield Cottages neighborhood received flyers Tuesday inviting them to participate in a thank-you event for Lawrence’s essential workers the following day.

Organizer Karen Cochran hoped the event would build up the community in her neighborhood and help people feel less isolated.

“From your driveway: share a sign, honk your horn, play some music, sing a song, pull up a lawn chair, have a glass of wine and do a distance toast to your neighbor!” her flyers said. 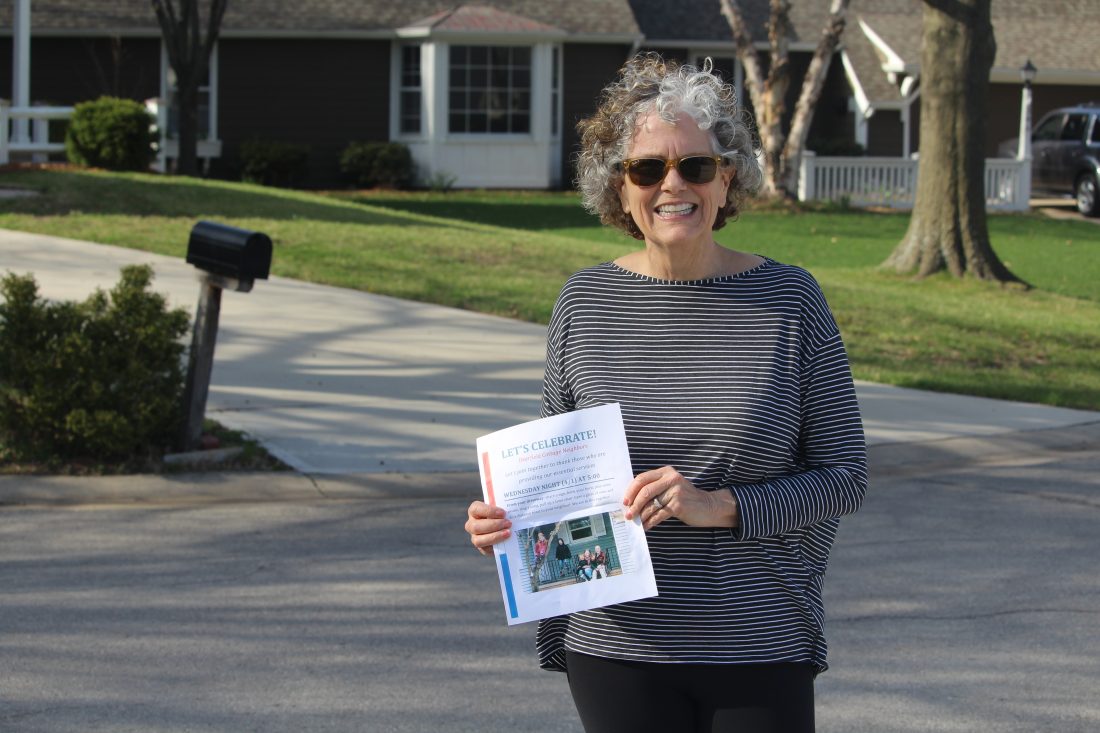 Karen Cochran organized a neighborhood-wide event on April 1, 2020, in Deerfield Cottages. She put flyers on her neighbors’ doors the day before, asking them to come outside at 5 p.m. on April 1 with signs of thanks for essential workers in Lawrence.

On a sunny 70-degree afternoon the following day, Cochran’s call was answered. About 40 residents appeared from their homes and pulled lawn chairs onto their driveways. Some had thank-you signs in hand; others had written notes in chalk on their driveways.

“In this together. (But apart),” one sidewalk message read.

Resident Marcia Roberts said she wasn’t surprised that many of her neighbors responded to the call.

“We’re a neighborhood where we’re all out anyway,” she said, jokingly adding that Cochran’s flyer plan was smart because “Guess what? She knew everybody was home.” 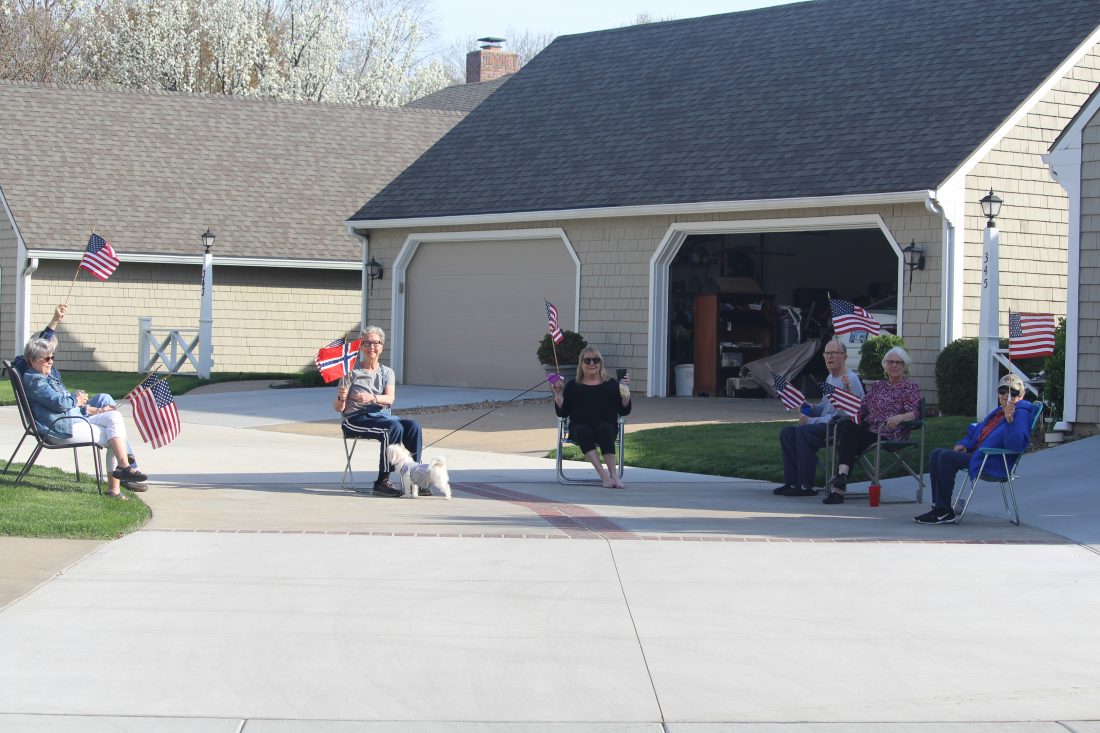 This group of friends in Deerfield Cottages waved American flags on April 1, 2020, to show their support of essential workers. One woman, originally from Norway, also brought a Norwegian flag.

Cochran’s husband, Ron Guerin, took pictures of the neighbors and their signs, and plans to share them with Lawrence’s essential workers via email or social media.

Cochran hopes others in Lawrence will plan similar events.

“We need to keep building community and do this together,” she said. 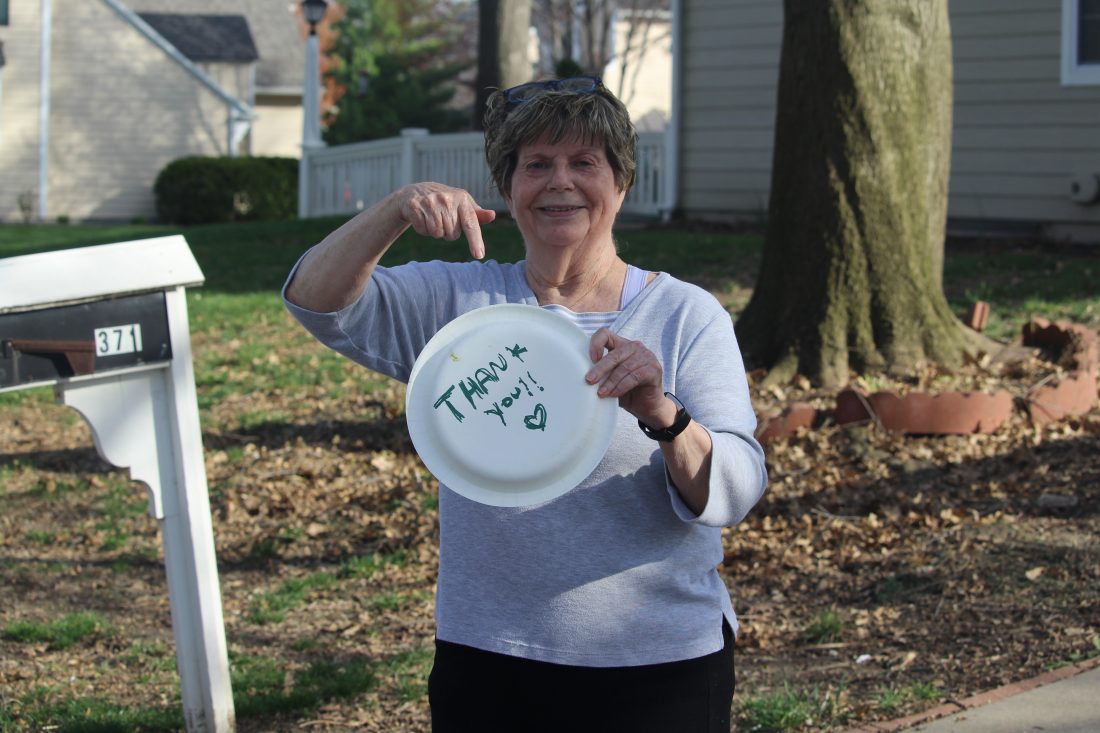 Angie Davidson stood on her driveway on April 1, 2020, with a paper plate expressing support for essential workers in Lawrence.

Cochran’s neighbor, Marie Strahan, had quite the setup in her driveway. With her car doors open, she sat under the shade of her open trunk while John Denver’s “Rhymes and Reasons” streamed from a CD in her car.

Before she retired back into her home, she shouted to Cochran across the way, “Hey, Karen, same time next week!” 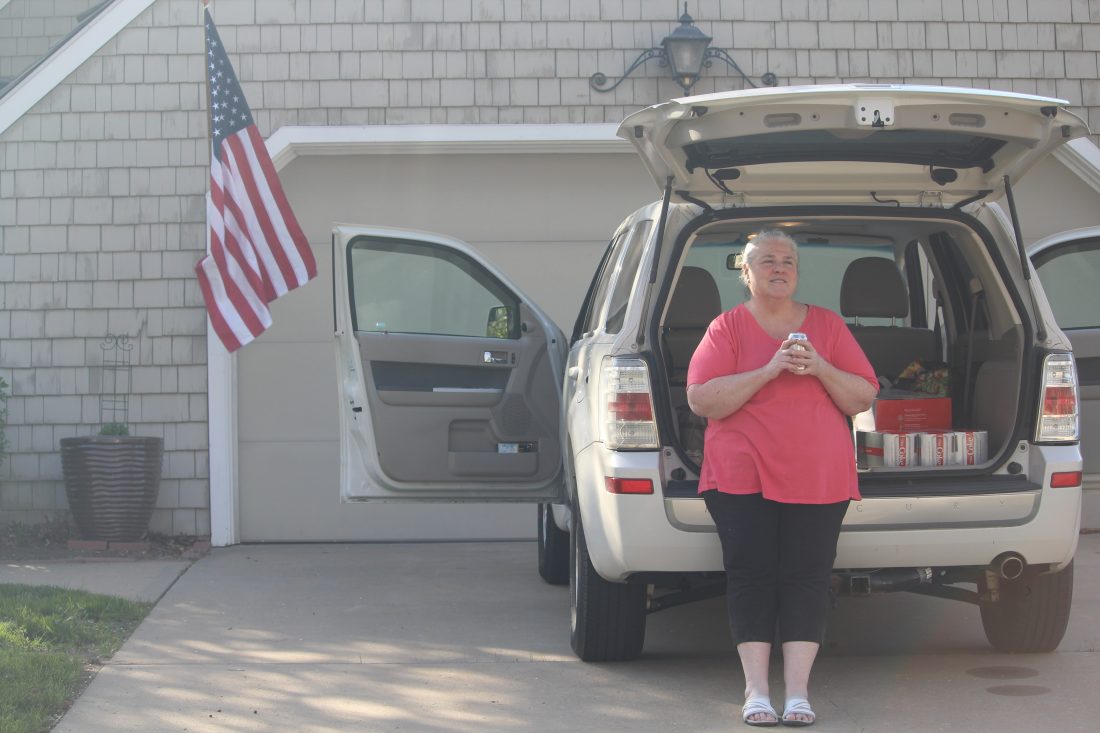 Marie Strahan was playing John Denver songs from her car at the neighborhood gathering in Deerfield Cottages on April 1, 2020. 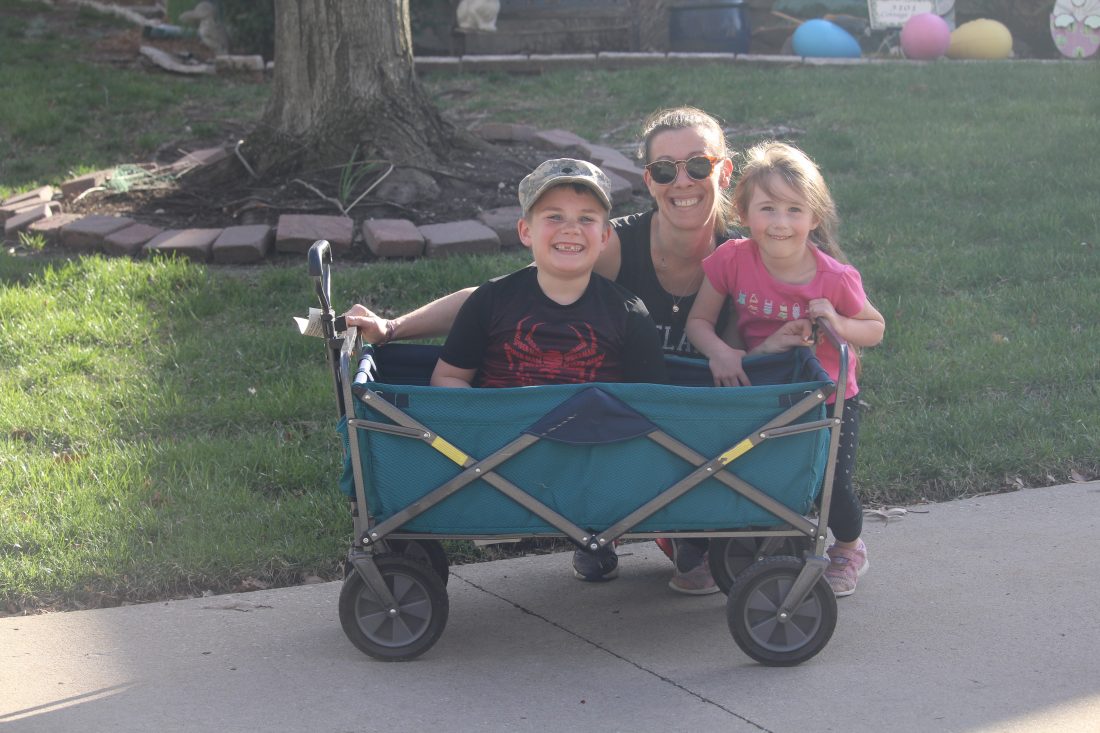 From left, Leo, Kate and Lilly Carnahan walked across their neighborhood in Deerfield Cottages on April 1, 2020, to see their neighbors, many of whom had signs or chalk art thanking essential workers in Lawrence. 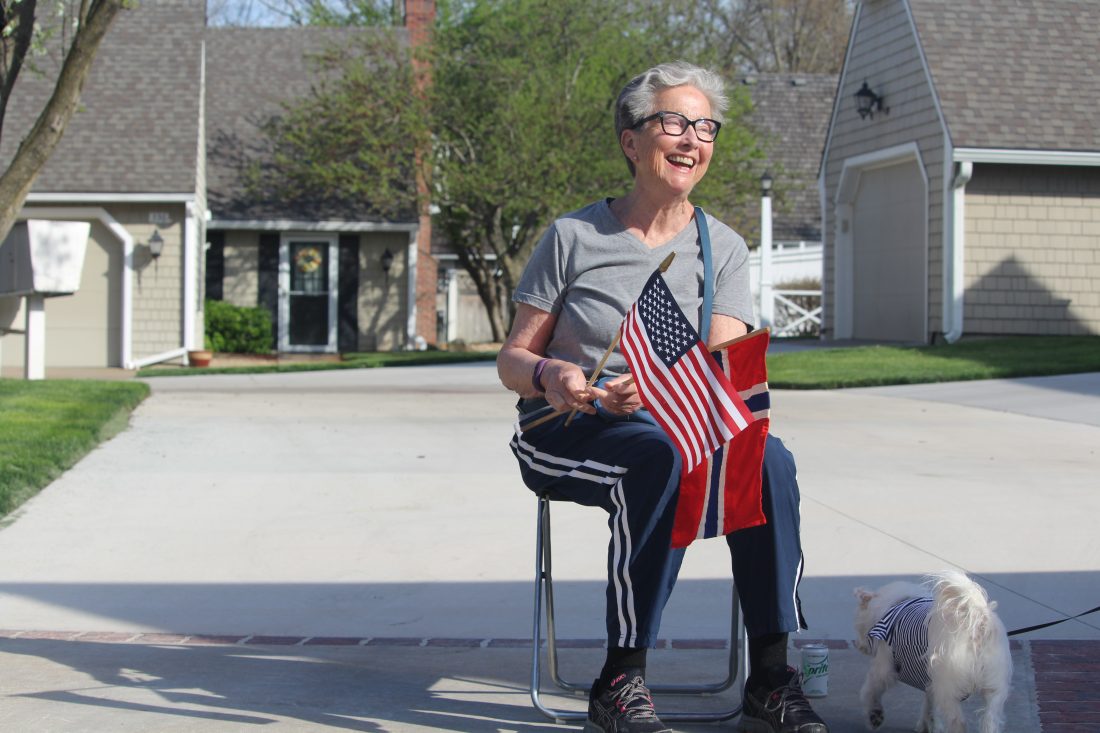 Anne Fordyce, originally from Norway, brought an American and Norwegian flag outside on April 1, 2020, to show support for essential workers. 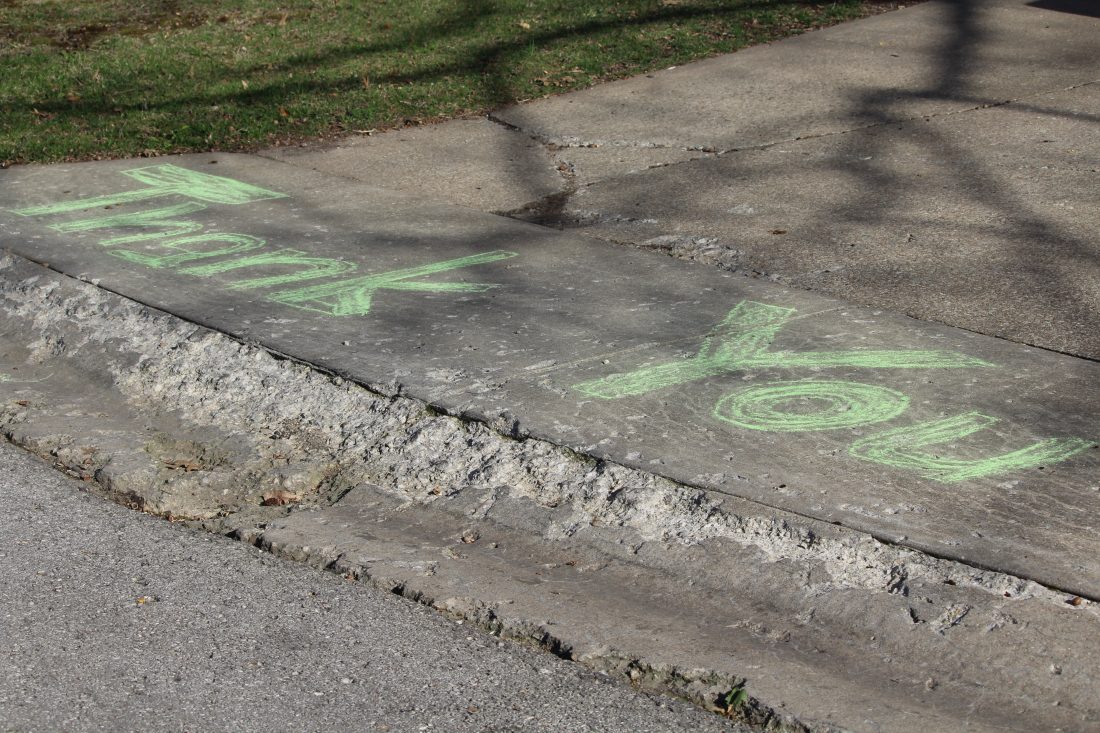 A thank-you note in sidewalk chalk was written on a driveway in the Deerfield Cottages neighborhood on April 1, 2020.

Residents of Baldwin City and Eudora appear to have done more of their shopping close to home since the COVID-19 ...