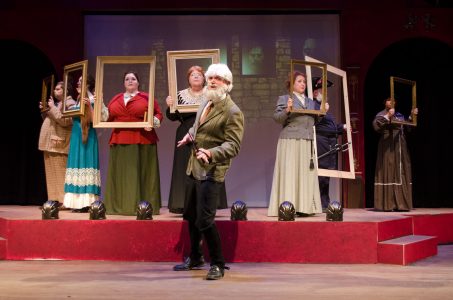 Patrick Kelly sings "I Don't Understand the Poor" during a dress rehearsal of the musical “A Gentleman’s Guide to Love and Murder” at Theatre Lawrence on Monday, Sept. 16, 2019. Kelly plays multiple members of the D’Ysquith family throughout the show.

“I mean, they’re pretty awful,” said Douglas County Commissioner Patrick Kelly of the multiple characters — at least eight — that he plays in “A Gentleman’s Guide to Love and Murder,” which won four Tony Awards in 2014, including Best Musical, and which opens Friday at Theatre Lawrence.

The show, based on a 1907 novel called “Israel Rank: The Autobiography of a Criminal,” is a dark comedy about the son of a washerwoman who discovers he is actually a member of Britain’s aristocratic D’Ysquith family (pronounced DIE-squith). It’s delightful news, but, as it turns out, multiple people stand in his way to the coveted earldom. The dark part is that he has to kill them. The comedy part is how he does it. 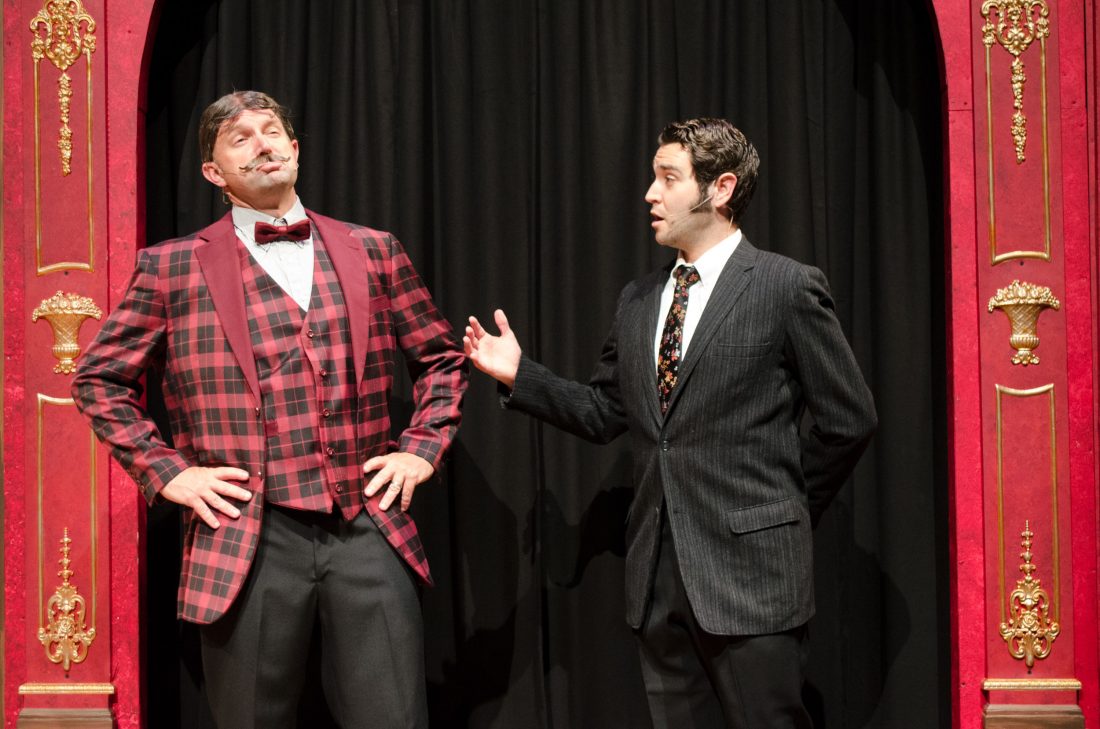 Patrick Kelly, left, and Tony Console rehearse a scene from “A Gentleman’s Guide to Love and Murder” at Theatre Lawrence on Monday, Sept. 16, 2019. Kelly plays multiple members of the D’Ysquith family, and Console plays the role of Montague “Monty” Navarro.

The people to be murdered — all of them — are played by Kelly. They’re known collectively as the D’Ysquith Family and include various lords, ladies and other aristocrats.

“It’s a unique challenge,” Kelly said of the multiple roles, which of course require numerous rapid-fire costume changes. How many? “I can’t even count,” he said. “I think I have maybe five to 10 seconds to change costumes and pull off makeup and just be someone completely different.”

“It takes a whole lot of people to make it work,” he adds, referring to the backstage crew and other cast members.

Aside from changing appearances, there’s the challenge of making the characters feel distinctive and “honest.”

“Each one of them has a different voice and a little different posture,” Kelly said.

He worked hard with the musical’s director, Ric Averill, to ensure that the characters felt like individuals rather than caricatures.

Apart from the acting challenge, there’s the singing and dancing — required of everyone in the 11-member cast. 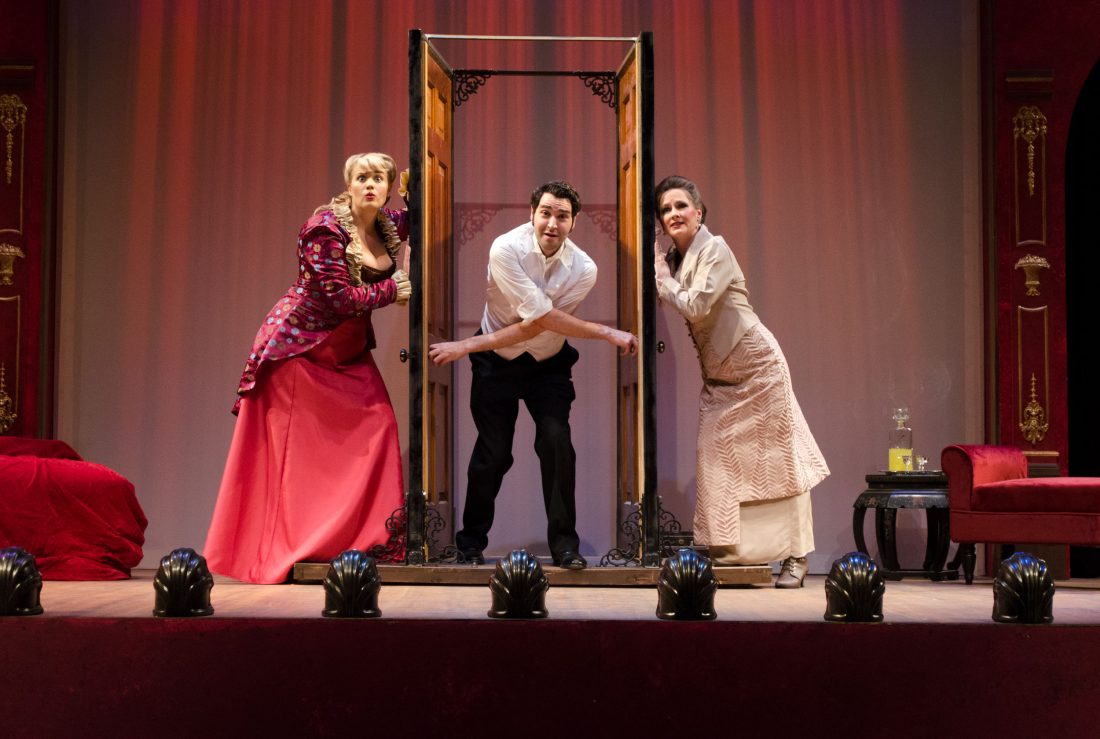 Secily Rees, from left, Tony Console and Rebekah Ankrom-Baker rehearse a scene from “A Gentleman’s Guide to Love and Murder” at Theatre Lawrence on Monday, Sept. 16, 2019.

Averill notes that the musical, which “has little quotations from all kinds of traditions in American and British musicals,” is difficult even for accomplished singers. “There’s a lot of Gilbert and Sullivan to it.”

“It’s hard to sing, and it’s beautiful when it’s sung well, and we have great singers,” he said.

For this show, the theater is being transformed into what Doveton described as a “kind of turn of the century jewel box theater” with lots of dark reds and golds and black curtains.

But it’s a high-tech turn of the century, and that’s one of Averill’s favorite things about the show.

“I love working with the set designer (James Diemer),” he said. “We’re doing a lot of digital scenery. You have to figure out ways to stage all these murders, so we’re doing a lot of things digitally, like there’s a digital fall from the top of a tower that’s really cool.”

Kelly, 49, has been in many shows and has even played a few “awful” characters before, including Rooster in “Annie” and Captain Hook in “Peter Pan,” but this is his first show since he was sworn in to the Douglas County Commission in January. His full-time day job is being director of the Lawrence College and Career Center.

It’s a busy life, with hours of rehearsal on top of official commitments, but it’s an “opportunity to continually work with other artists,” he said.

One of the ways he “multitasks” is to record the songs from his shows and practice as he drives around town to various meetings and appointments.

Kelly grew up in Long Beach, Calif., where he developed an early love of musical theater.

“My parents were kind enough — it wasn’t really their background — that they connected me with (theater),” he said.

In junior high he got to be in the chorus of “Pippin,” then “Camelot.” He remembers that he “totally idolized the adults who were the leads in those shows.”

In 1989 he moved to Lawrence to attend KU, to sing with the jazz choir there and to get his degree in music education.

From there he held various jobs, including teaching band at West Middle School, directing fine arts for the Lawrence school district and working in other administrative positions. 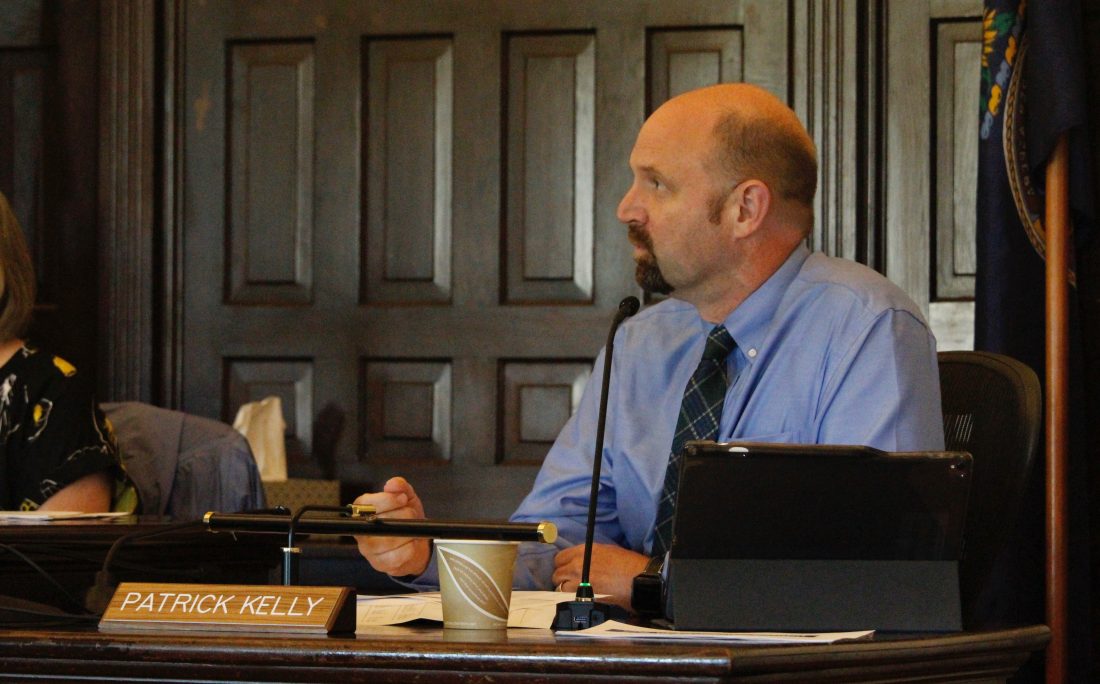 Douglas County Commission Vice Chair Patrick Kelly speaks to members of the Lawrence Community Shelter Board of Directors during the commission’s meeting on Wednesday, June 12, 2019.

Along the way he and his wife, Amy Kelly, formed their own musical family with two daughters.

Amy, he said, is hands down the best actor of the group. Their youngest daughter, Brynn, just left for Drake University in Iowa to study acting.

“Like some families do sports, we do theater,” Kelly said. “It’s not uncommon for us to sit around and call lines for each other.”

What about stage fright? He doesn’t get it — on the stage or at the commission table — so long as he is well prepared.

With the current show, that preparation began long before he even landed the role.

“Before the audition I did quite a bit of work because I really wanted this part,” he said.

Sometimes his theater life clashes with his official life.

“One night I thought I was going to be at rehearsal and it was an extra long (commission) meeting and I never made it,” he said, adding that his theater colleagues completely understood.

And of course acting during the commission’s busy budget-making season is out of the question.

But when he can, he makes every effort to stay heavily involved with the arts.

“I love creating and I love using it as a way to engage with our community,” he said.

One of the greatest things about community theater, he said — and Doveton and Averill echoed — is that “pretty much everyone is a volunteer and we’re all just putting on a show for our neighbors to both entertain and educate and maybe raise some issues for us to talk about.”

• “A Gentleman’s Guide to Love and Murder” (September and October)

For performance dates and times, plus ticket information go online to theatrelawrence.com or call the box office at 785-843-SHOW (7469).