Let’s ‘see what we can accomplish’: Haskell interim president gives outlook on the year ahead 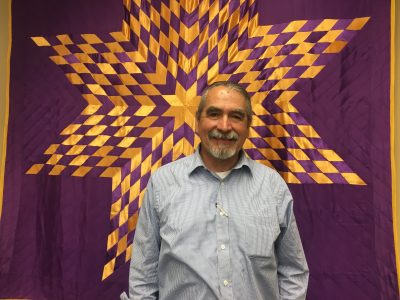 Sometimes, as he spoke, the interim president of Haskell Indian Nations University, Daniel Wildcat, would close his eyes. He looked contemplative as he responded to questions regarding the future of a university whose helm he took in November 2018 and that expects to select a full-time president as soon as January.

But Wildcat’s not sitting idly by until then.

Wildcat, 66, has worked at Haskell for 33 years. He’s not in the running for the full-time president position, but he’s doing what he can for the institution until that time.

“We cannot afford to just sit on our hands and not do anything because, well, we don’t have a president,” he said. “We’ve got a lot of people here with a lot of experience, so my view’s been let’s put our minds together and see what we can accomplish.”

Last week in Haskell’s campus library, Wildcat, a Yuchi member of the Muscogee Nation of Oklahoma, identified three areas where the university is focusing its efforts: student retention, strategic planning and changing the university’s organizational chart.

Student retention is a big goal for the university, and Wildcat said the orientation program and allowing students to do early enrollment have helped in these efforts. This week marks the official enrollment count, when the university will send in its student tally. Wildcat hopes it will remain steady at 796, where enrollment stood last week.

If Wildcat could give one piece of advice to students, it’s to “get engaged,” he said. People who get involved in clubs and come to know faculty and fellow students are “more likely to feel like a part of the community and more likely to stay and be successful.”

Of the 2020-2030 strategic plan, another major project the university is currently working on, Wildcat said it would have some aspirational elements but would focus on concrete goals and benchmarks. Some of these include repairing Haskell’s oldest structure, Hiawatha Hall, creating new degree programs and more fully engaging with alumni and community members.

Wildcat also said the university was working on reorganizing its leadership chart so that it more accurately reflected a traditional university structure. One of the things he hopes to accomplish in the organizational chart is to create a permanent position heading the Cultural Center and Museum, which closed indefinitely last winter after its operating grant expired.

In addition, Wildcat wants Haskell to make data-informed decisions and help under-served students who begin in pre-college level courses reach the college level within one to two semesters.

Wildcat became noticeably animated when he shared one piece of advice he thinks about every day.

“We don’t care about what you know until we know you care,” a female student once told him at a conference.

“I thought that was really a very useful insight she was sharing,” he said. “You know, students don’t want to be treated like numbers. They want to know you care about them.”

Wildcat is looking forward to showcasing students and faculty on Oct. 12 at an open house for members of the Lawrence community to experience “a day at the university.” It’s one of two events he’s most looking forward to this semester.

The other, the first indigenous “Just Transition” assembly, will host discussions regarding American Indians who are engaged in carbon-based energy and manufacturing as the economy shifts to sustainable production practices.

When Wildcat took over in late 2018, he replaced Venida Chenault, who handed over the office of the president just days after a federal report detailed allegations of misconduct at the university. The Bureau of Indian Education director said that Chenault would be on “special assignment for the BIE.”

Originally, her leave was set to be two months. Then it was extended. In March, it was announced that she wouldn’t be returning.

The investigation, which a spokesperson for the U.S. Bureau of Indian Affairs said had nothing to do with Chenault’s departure, found that administrators at the university had underreported crime statistics for a two-year period and had failed to follow internal policy when handling misconduct complaints.

The report also said Chenault admitted to handling an allegation of a sexual assault differently because it was reported by a male and that a student was likely “re-victimized” after Haskell admitted to mishandling an allegation of an instructor sexually assaulting a student. It also found that other administrators considered Chenault’s behavior “abusive” and “highly manipulative.”

While in March it was originally announced that Chenault would remain on campus working for the BIE, Wildcat said last week that she did not currently work on campus.

He also said the university has hired an outside consultant, D. Stafford & Associates, to do a review of the university’s crime reporting.

Haskell will need to disseminate a public security report Oct. 1 per the Clery Act, which requires federally funded colleges and universities to release a report to employees and students outlining statistics of campus crime for the past three calendar years and efforts taken to improve campus safety.

“We’re looking forward to issuing that reporting — getting it completed — because I assure you, it will be done right,” he said.

Wildcat expects a new president could begin as early as the start of next semester. The first week of September, two candidates visited campus. Wildcat cannot be considered for the job because he has not held a federal GS-14 position for a year, one of the requirements needed to apply for the GS-15 presidency position.

At the end of the interview, Wildcat expressed his love for the university.

“What is beautiful about this institution and makes it so unique, is you have here the united nations of Indigenous higher education,” he said. “The last five years, each academic year we have averaged over 140 federally recognized tribes and Alaska native villages. Each year.” He added that 42 states are represented.

Wildcat was unclear about what he will do when he steps down as interim president, but he mentioned the possibility of returning to the classroom as a professor, serving in a different administrative role or spending some time on the two books sitting on his desk — unfinished.