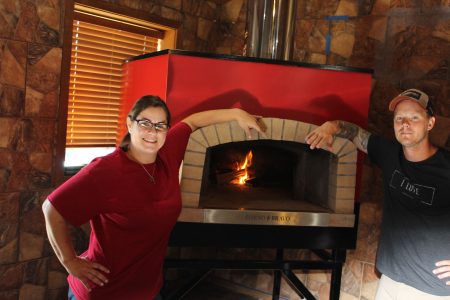 Jessica and Brad Tyler are pictured Saturday, Sept. 14, 2019, with the wood-fired oven at Flatlanders Pizzeria, which is set to open by the end of the month in Baldwin City.

When Jessica and Brad Tyler made plans in March to open a new pizza parlor in Baldwin City, they first decided to learn from the source.

Shortly after they decided to start their own pizzeria, the couple took a two-week trip to Italy, where they attended an Italian pizza school; got a refresher on such Mediterranean staples as olive oil and wine; and visited restaurants in Florence, Rome, Venice and Verona.

Now, Jessica said she and her husband are renovating the former banquet room in The Lodge motel, 502 Ames St., with the goal of opening Flatlanders Pizzeria before the end of this month.

“We decided to go all in on pizzas and learn from the experts,” Jessica said. “We went all over the place. Everywhere we went, people were so friendly and welcoming. We were able to go into kitchens to take pictures and talk to chefs and cooks.”

Italians tend to change their pizza toppings throughout the year, emphasizing ingredients that are fresh and seasonal, Jessica said. She said she was told most Italian cooks are fine with putting anything on a pizza except pineapple, although two chefs she spoke to had a brief debate over whether seafood was acceptable on a pizza.

The couple brought back that Italian commitment to using fresh and local ingredients on their pizzas, Jessica said. She is now making connections with local farmers to supply pizza ingredients and arranging to obtain beers and wines from local breweries and wineries.

The Tylers also intend to capture the atmosphere of the more relaxed Italian restaurants they visited.

“It’s not fast food,” she said. “It’s a place people can have a glass of wine or a beer and relax, with no hurry to leave their table.”

At the same time, the couple understand that the hectic pace of American life sometimes doesn’t afford the luxury of a relaxed meal, so they will also offer “take-and-bake” pizzas, Jessica said. In another concession to domestic tastes, Flatlanders will offer both an Americano pizza with shredded mozzarella and a classic Italian pie with layered, sliced cheeses.

The pizzas will be cooked in a wood-fired oven, she said, and salads and pastas will also be on the menu.

“We’re going to offer weekly salad and pasta specials,” she said. “We’ll start out with a small appetizer menu and add brunch on the weekends.”

The Tylers also plan to have a fresh salad bar, something Jessica said is now missing in Baldwin City. For birthdays, children will be invited to build their own pizzas, she said.

Jessica is not new to the restaurant business, either in Baldwin City or elsewhere. She owned Cordoba’s, located in what is now Jo’s Diner, before moving to Colorado about nine years ago. There, she met her husband and ran a bed and breakfast in Idaho Springs, Colo., before moving to Bend, Ore., and managing a farm-to-table restaurant there.

Jessica said she and her husband decided to move back to Baldwin City to share her restaurant skills with her family and community.

“Whenever we went out in the community, people would come up to me and ask when I was going to open another restaurant,” she said.

Last year, the Tylers did open a temporary “pop-up” restaurant at The Lodge that catered to people who were in town for Midland Railway’s holiday-themed train rides. It proved so popular that the couple continued to offer the limited menu until March, when they decided to take the plunge on the pizzeria.

Jessica said her pizza-loving husband jokes that a pizzeria was a natural choice.

“He says he has been doing market research on pizzas his entire life,” she said.