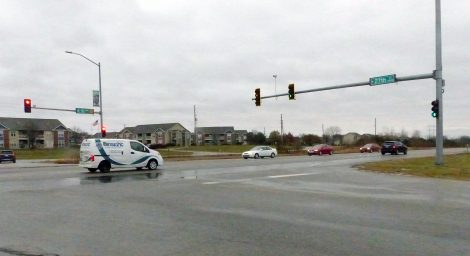 Traffic passes through the Kansas Highway 10 intersection at Wakarusa Drive and 27th Street on Saturday, Dec. 1, 2018.

KDOT began its three-year environmental impact study on a lane expansion project in September 2018, as the Journal-World previously reported. To improve safety, KDOT installed a queue warning system in advance of the trafficway’s intersection with 27th Street/Wakarusa Drive, according to a news release. That intersection has been the site of several accidents, and the Journal-World reported in December of last year that 20 accidents had occurred at the intersection in as many months.

Advanced warning messages on three eastbound signs and four westbound signs inform travelers of the presence of slow or stopped traffic. The signs will notify travelers to slow down to help reduce queuing-related collisions. KDOT urges all motorists to be alert and obey the warning signs when approaching and driving through this intersection.